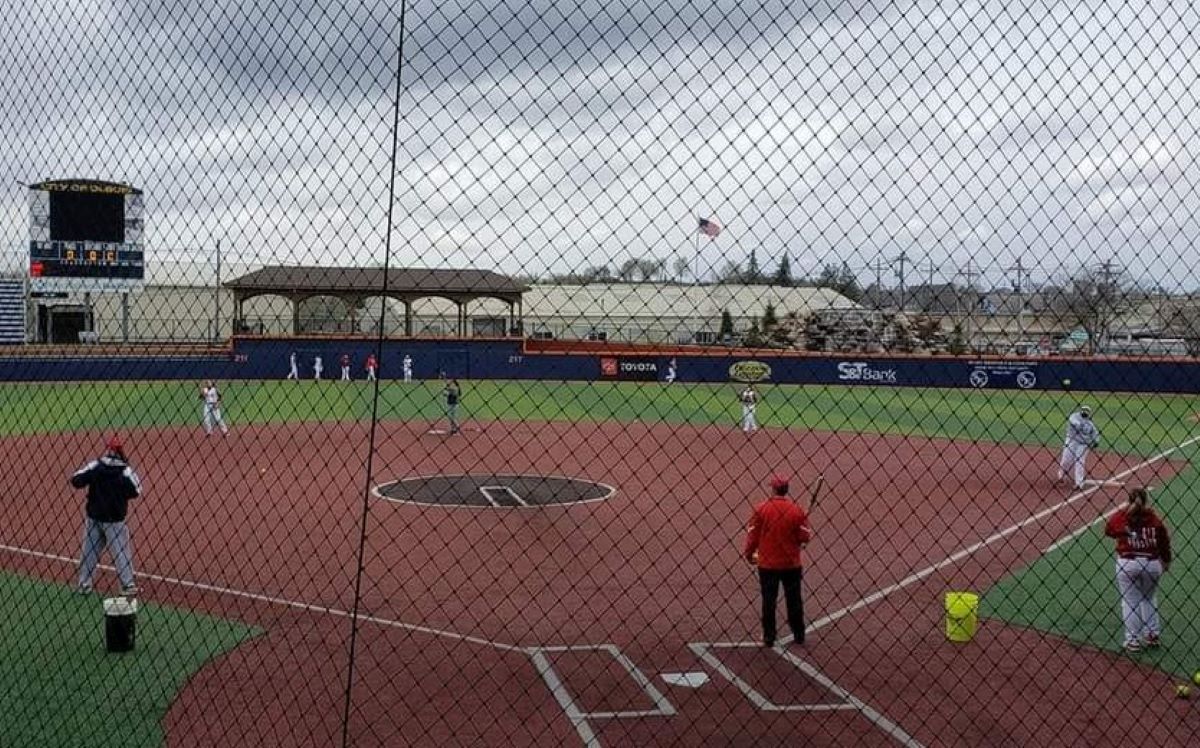 DuBois Central Catholic warms up prior to its win over Kane Thursday. Photo courtesy of DCC Softball

The Lady Crusaders trailed 5-3 going to the bottom of the seventh before Lacy Klawuhn got the rally started when she reached on an error before going to second on a wild pitch and scoring on a two-out single to shortstop by Lydia Anderson. Emily Mourer then singled putting runners on first and second for Sydney Alexander.

The first pitch to Alexander was wild, and Anderson came all the way home to score before Mourer scored on the same play to give ECC the victory.

Johnsonburg had broken a four-all tie with a run in the top of the seventh when Jenna Pavlock scored on a wild pitch.

Julia Jones was 2-for-4 with an RBI for Johnsonburg with Jenna Karsmirski going 2-for-4 as well.

Mourer got the win going seven innings and allowing five runs, two earned, on seven hits and a walk while striking out four.

BROOKVILLE, Pa. – Ashton Pangallo struck out eight batters and was one of three players with three hits apiece in Brookville’s 13-6 win over Brockway at Northside Field Thursday afternoon.

Madi Hoyt tossed a one-hit shutout walking one and striking out three in three innings of work.

Maya Smith had the lone hit for Kane.

Madison Stahli took the loss giving him 15 runs, 10 earned, on 11 hits and two walks while striking out one in 2 ⅓ innings of work. She also hit three batters.

In the first game, the Lady Tide plated 18 first-inning runs after sending 23 players to the plate and collecting nine hits, including four doubles, and walking 12 times.

Logan Sheeder led the way in the first game for Curwensville, driving in five runs while going 3-for-4 with a pair of doubles and two runs scored.

Also for the LadyTide, Mackenzie Wall was 2-for-2 with two walks, an RBI, and two runs scored, Maddie Butler and Breanna Babcock each scored three times with Butler driving in one run and Babcock two, Rylee Wiggins scored twice and had an RBI, Teagan Harzinski scored twice, and Shyanne Rudy scored twice and added a pair of RBIs.

Freyer got the win throwing a three-inning no-hitter. She walked one and hit a batter while striking out six.

In Game Two, Curwensville, as the visiting team, sent 20 batters to the plate in the first inning to score its 17 runs collecting 10 hits, including six doubles and a home run, while walking five times being hit by a pitch, and reaching twice via errors.

Reese Novosel had the big hit in the second, a two-run double that started the scoring for the Wolves.

That was one of two doubles on the afternoon for Novosel, who was 2-for-4 with a run scored and three RBIs.

Carson Whiteman was also 2-for-4 with an RBI, and Bryce Bizzak was 2-for-3 with a walk and an RBI.

Ben Gritzer paced DCC going 2-for-3 with two RBIs, while Cartar Kosko was 1-for-3 with a double and an RBI, and Kaden Brezenski walked twice and scored twice.

BELLEFONTE, Pa. – Trevor Johnson drew a bases-loaded walk on a 3-1 pitch in the bottom of the seventh inning, and Bellefonte walked off Clearfield, 10-9.

Kyle Elensky had just intentionally walked Max Rodgers to get to Johnson but couldn’t find the zone with two outs allowing the Red Raiders to win the game.

It was two-out lightning for Bellefonte in the seventh, as a Seth Shuey single proceeded the international walk and put runners on second and third after the throw went to third.

Bellefonte had tied the game at nine with a run in the bottom of the sixth in what was a back-and-forth affair.

Bellefonte took its first lead with a five-run bottom of the second to go ahead 5-4 before Clearfield scored three in the fourth to go back in front, 7-5.

The Red Raiders tied the game with a pair in the bottom of the fourth before the Bison went back in front again with a two-run fifth.

Johnson’s walk was the fourth he drew in the game, and he was 1-for-1 with two RBIs.

Also for the Red Raiders, Derek Fravel was 2-for-4 with a walk and a run scored, Dylan Dann was 2-for-3 with two RBIs, and Nick Capparelle was 1-for-4 with a double, a walk, and two runs scored.

Elensky, Nolan Barr, and Hunter Dixon each had three hits for Clearfield.

Elensky was 2-for-3 with two walks, a run scored, and an RBI, Dixon was 3-for-4 with a walk and three RBIs, and Barr was 3-for-5 with three runs scored out of the leadoff spot.

Karson Rumsky chipped in two hits for the Bison going 2-for-5 with two runs scored and an RBI, while Ryan Gearhart was on base four times going 2-for-2 with a pair of walks. Blake Pretsash also drove in two runs and scored a run while going 1-for-3 with a walk.

Johnson’s walk made him the winning pitcher.

He went a scoreless inning of relief giving up a walk while striking out one.