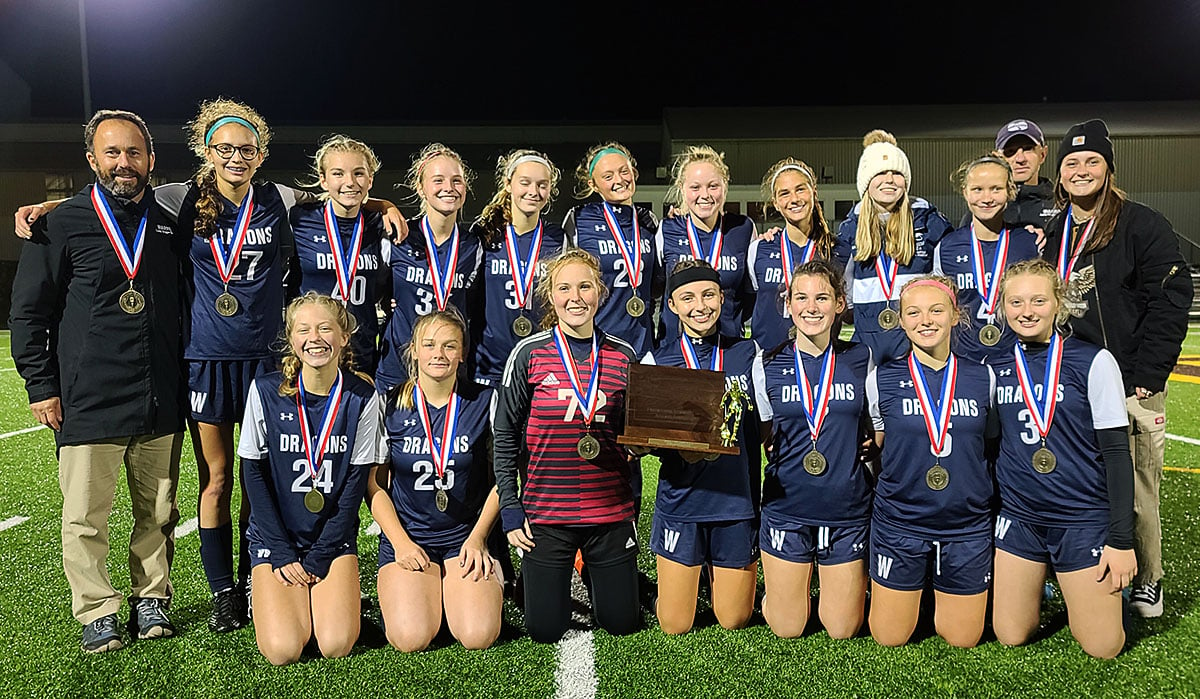 TITUSVILLE, Pa. – Lennon Dailey’s putback on a rebound off a corner kick less than nine minutes into the second half proved to be the game-winner as Warren topped Meadville, 2-1, to win its third straight District 10 Class 3A girls soccer championship Thursday.

With 31:16 remaining, Georgie Bickling took the corner and put the ball to center. It bounced through multiple players and right to Dailey’s foot. Dailey fired a shot top-shelf before Meadville keeper Laci Carlson could react to give the Dragons a 2-1 lead.

Both teams were coming off lengthy layoffs, Warren 10 days and Meadville seven days, and exhibited signs of rust in the early going. The score was tied, 1-1, at the half thanks to own goals by each team.

With just over 18 minutes to play in the half, Warren brought the ball deep into Meadville territory. The Bulldogs’ Brielle Cheney tried to clear a crossing pass intended for Dailey. The ball hit off the side of Cheney’s foot and tucked just inside the goal post to give Warren a 1-0 lead.

Minutes later, Meadville had a corner kick. Phoebe Templin took the corner and fired to the near post. Marielle Stanz tried to block the shot, but the ball grazed off her leg and into the back of the net to tie the match at 1-1.

“I’ve seen two own goals in a game before, but never one by each team,” Warren head coach Jeremy Bickling said.

Warren had two golden opportunities to take the lead with less than five minutes in the half, but Carlson made a pair of spectacular saves to keep it tied.

The first was on an indirect free kick. Lauren Andersen looped the ball past the defense and right in front of Dailey. Carlson was able to win a foot race to the ball and made a diving stop just before Dailey could get her foot on it.

Seconds later, Georgie Bickling got the ball on a breakaway and a one-on-one against Carlson. Carlson came out to challenge and made a sliding stop on Bickling’s shot to turn away the chance.

Warren will take on the winner of Monday’s District 9 championship between DuBois and Bradford in a PIAA Subregional. The subregional is scheduled for Saturday, Nov. 6 at a time and location to be announced.

ERIE, Pa. – McDowell scored three times in the second half to earn a 4-2 win over Erie in the District 10 Class 4A championship game.

Four different McDowell players – Max Murphy, micah HAllmark, Braeden Martin and Micah DeVore all found the back of the net for the Trojans.

Hallmark’s goal proved to be the game-winner.

Erie had taken a 2-1 lead into halftime thanks to goals from Ahmed Saadoon and Henry Olango.

With the win, the Trojans move on to face the District 6 champion (State College or Altoona) in a subregional on Nov. 6.

Abby Faulhaber scored a pair of goals for the Trojans in the win.

D9 Volleyball Playoffs: Clarion, ECC, Oswayo Valley, C-L Advance to 1A Semifinals; Clearfield tops St. Marys in 3A
Watch/Listen Live: Eisenhower vs Saegertown D10 Class 1A Football Quarterfinal Powered by the Eisenhower Football Boosters
This website or its third-party tools process personal data.In case of sale of your personal information, you may opt out by using the link Do not sell my personal information.
×
Manage consent