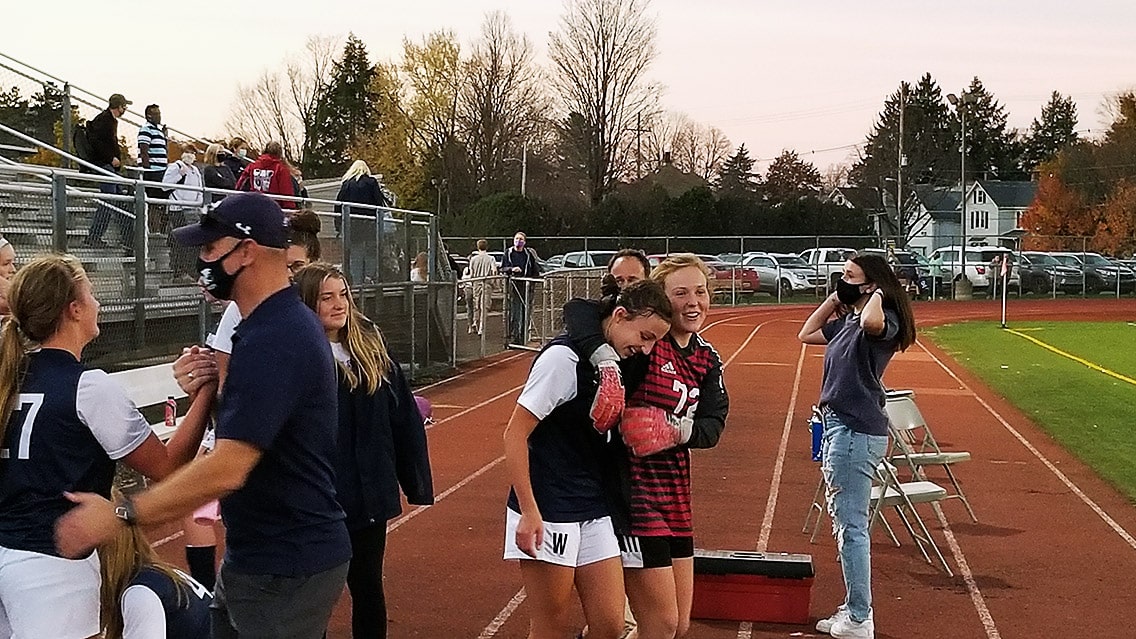 WARREN, Pa. – For most of this season, Warren keeper Alyssa Andersen has been out of the limelight, even though she registered 16 shutouts, as the Lady Dragons offense put up gaudy numbers.

(Photo by Brian Hagberg. Warren keeper Alyssa Andersen shares an embrace with Lennon Daily following their 2-1 win over Bradford at War Memorial Field, Saturday, Nov. 7, 2020. The Dragons will play Mars in the PIAA State quarterfinals Nov. 14 at a time and location to be determined.)

On Saturday, Andersen reminded everyone that she’s one of the best keepers in the region as she helped the Dragons to a 2-1 win over District 9 champion Bradford in the first round of the PIAA State playoffs at War Memorial Field.

“Just insane,” Warren coach Jeremy Bickling said. “To handle the pressure, to handle those types of shots with that sort of talent . . . it’s a good team with insanely good scorers and she was locked in on every ball.”

The Owls’ goal in the second half ended Andersen’s 14-game shutout streak, and was just the second goal allowed all season. Both were on penalty kicks.

Both teams are familiar with each other through the NY/PA Corporate Cup and travel teams, and that familiarity helped the Dragons prepare.

“I think that familiarity helped us game plan without being able to see them,” Bickling said. “That helped, but the girls still have to go out and execute. I think this was their best game, defensively, all year.”

The Owls were able to control possession early, but couldn’t get a high quality chance. Warren countered and took the ball into the offensive zone. Bradford was called for a hand ball in the box and the Dragons were awarded a penalty kick.

Georgie Bickling took the kick and tucked the ball inside the left post to give Warren a 1-0 seven minutes in.

Warren picked up its second goal just past the midpoint of the half.

Georgie Bickling took a corner kick and fired the ball right to center. Paige Johnson leapt in and bodied the ball into the net for a 2-0 Warren advantage.

Two minutes later, Bradford had a pair of quality scoring chances and Andersen came up with the save on each.

Both teams were able to get the ball deep, but neither could find the back of the net again and the score remained 2-0 at the half.

Just two minutes into the second half, Andersen came up with a big stop off an Owls corner kick. Maddi Cowburn took the corner and put the ball to center where Kelsea Austin got a head on it. Andersen snagged Austin’s redirect before it could sneak under the crossbar.

Bradford had its best chance of the match in the 46th minute.

Cowburn broke free down the middle and fired a laser at the goal. Andersen made the save, but gave up a rebound. The rebound went right to Austin who appeared to have an open net. Somehow Andersen was able to get back in position and made the stop on Austin’s shot.

“I just kept my eye on it,” Andersen. “I watched the feet, watched where their hips were going so I could make the save.”

Bradford broke through in the 52nd minute. Much like Warren’s first goal, the Owls were awarded a penalty kick after the Dragons were called for a hand ball in the box.

Cowburn took the kick and got it just past a diving Andersen to cut the deficit to 2-1.

The Owls kept the pressure on through the remainder of the half, but the Dragons defense and Andersen kept the ball out of the net and sent Warren to the state quarterfinals.

“They (the defense) didn’t get a lot of credit or the spotlight because it was such an offensively oriented season,”  but we know how good they are we know what sort of pressure they can handle.”

Andersen finished with 10 saves for the match.

Warren will have a rematch from last year’s state tournament when the Dragons take on WPIAL champion Mars in the quarterfinals Nov. 14.

The Dragons fell to the eventual state champions in the first round last year, during a season which saw Warren capture the first District 10 title in program history. This year, the Dragons are looking for more.

“The girls are excited for that opportunity,” Bickling said. “That was the No. 1 goal for the year. They’re not afraid of playing Mars, where last year they may have been afraid. Now, they want that challenge.”

Time and location for the quarterfinal match will be announced at a later date.