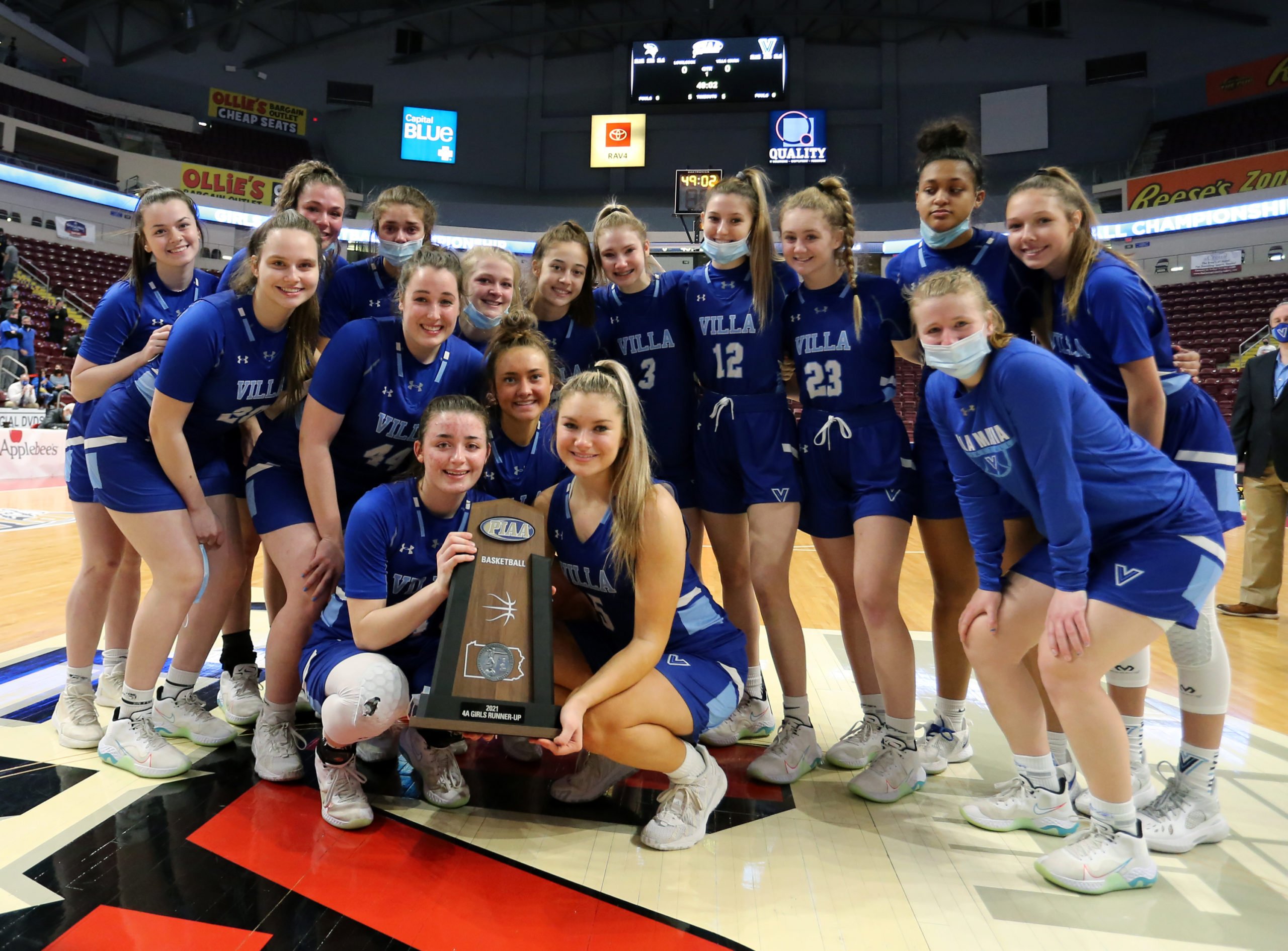 Villa Maria’s quest for an undefeated season came up just short, as they fell to Archbishop Wood, 44-34 in the PIAA Class 4A championship game on Saturday at the Giant Center.

“This team is relentless,” Villa senior Ava Waid said of her squad. “I’ve said it over and over again I wouldn’t want to be out here with anyone else. This is our game, we wanted to be here, being a senior this means the world to me and to be out here with my best friends is something I’ll always remember.”

Tied at 18 apiece in the third-quarter, Wood (17-2) went on a game-defining run thanks to the play of senior guard Kaitlyn Orihel.

The Villanova commit scored all 10 of the Vikings’ points in the third quarter, extending the lead to seven, 28-21 in the process.

“They were able to get in transition and we made a few mistakes defensively, which really hurt us,” said Villa’s Rachel Majewski.

Included in that run were a pair of 3-point plays.

Villa got as close as five in the fourth quarter, 32-27, after a pair of Jayden McBride free throws with 3:17 to play, but Wood responded with an 8-0 run to put the game and the championship on ice.

Orihel and Ryanne Allen, ESPN’s No. 55 rated junior in the Class of 2022, were brilliant, combining to score all but two of Wood’s points in the game.

It was a tough end to a brilliant season for the Victors.

“We’re such a big family,” said Villa’s Ainsley Thunell. “I mean, to come this far, with all these girls, I wouldn’t trade it for anything.”

The game was a true contrast in styles, with Villa wanting to slow the game down and Wood wanting to play a more up-tempo style.

Villa did that for the most part, in the first half, thanks in large part to the stellar play of Waid, who dictated the pace.

A Rachel Majewski 3 gave Villa an early 7-5 lead and a layup from Waid, who beat the Wood press, to close the first quarter, tied the game at 9-9 after the Vikings had briefly taken the lead.

“We just wanted to control the game,” said Carissa Dunham, who scored the first two points of the contest for the Victors. “We knew they wanted to run up and down and we wanted to slow them down a little bit.”

Waid scored five of Villa’s seven points in the second quarter, but it was the Vikings that extended the lead to five, 18-13 late in the second.

A putback from McBride just before time expired in the first half got Villa back within two, 18-16 at the half.

The Victors did a good job neutralizing the taller Vikings in the first half, but Wood was also able to take advantage of its size more in the second half, holding a plus-six margin on the boards.

“It was difficult,” Thunell said. “I mean, they’re tall and one of their taller girls was a shooter, so we had to adjust to who’s guarding who and how fast they were. But we all can guard every position, so it was okay.”

Allen scored 11 of her 17 points in the first half, while Orihel had 20 of her 25 in the second half for the Vikings.

Waid finished with 11 points to lead the Victors, while Dunham added eight and McBride six.

“We slipped up a little bit in the second half, but I mean it was a great game,” Waid said.

This was Archbishop Wood’s sixth state championship in program history.

For Villa, it was their third PIAA runner-up finish since 2016 for a program that has dominated District 10 .

“We all wish we could have taken that one more step but sometimes you just got to step back and look back,” Majewski said. “What we did for the entire season, not just one game. It’s been a great season.”

BREAKING NEWS: Reynolds Wins Record 5th Straight PIAA Team Dual Wrestling Title
Brookville’s Historic Season Ends in Silver After Loss to Loyalsock in PIAA Class 3A Title Game Powered by Kelly Chrysler Jeep Dodge Ram
We use cookies on our website to give you the most relevant experience by remembering your preferences and repeat visits. By clicking “Accept All”, you consent to the use of ALL the cookies. However, you may visit "Cookie Settings" to provide a controlled consent.
Cookie SettingsAccept All
Manage consent