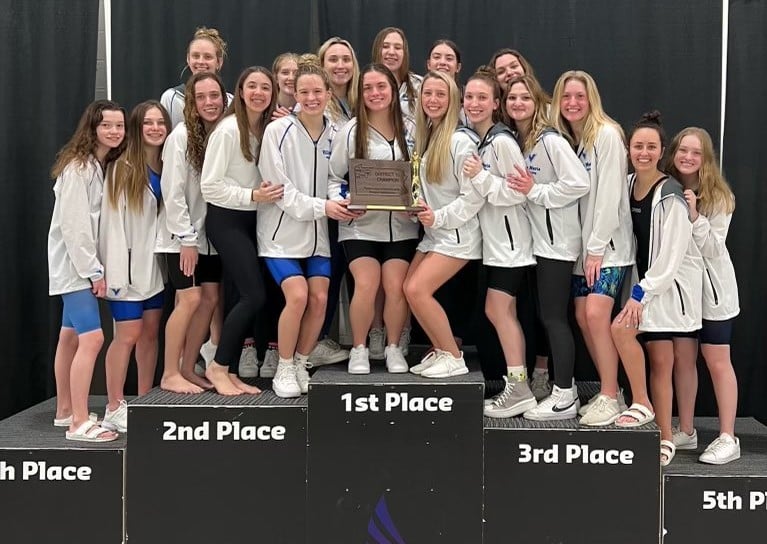 ERIE, Pa.. – The 2021-22 year was a special one for Villa Maria. The Victors had a great tremendous amount of success in multiple sports in the final year of the school, capped by a PIAA swimming championship.

Villa will merge with Cathedral Prep beginning with this upcoming 2022-23 school year, but their last season as Villa was a memorable one.

That included District 10 titles in tennis, soccer, swimming, basketball, and softball, with swimming finishing third in the team standings at the PIAA championships and taking a relay gold, while basketball had another special season, advancing to the PIAA semifinals.

In the D10 2A girls’ soccer title game against Fort LeBoeuf, Ella Raimondi broke the scoreless tie three minutes into the second half, and Villa was off to the races.

With 23 minutes remaining, it was Alexa Tojaga that found the back of the net to make it 2-0.

Villa proceed to score its third and fourth goals three minutes apart, as Raimondi scored her second of the game with 13 minutes to go and Callie Cacchione put the finishing touches on the game with 10 minutes remaining.

The Victors went on to beat Southmoreland in the first round of the PIAA playoffs, 4-3 before falling to North Catholic in the quarterfinals.

In tennis, Anne Marie Prichard and Abby Consiglio captured the D10 Class 2A doubles title, while Anna Poranski won the singles crown, with Prichard and Consiglio advancing to the PIAA semifinals and Poranski winning a first-round PIAA match as well.

Maholic went on to a fourth-place finish in the 100 fly, while Palmer was seventh in the 50 free.

For the basketball team, it was another banner year, as they went 24-3 led by first-team D9and10Sports.com All-District 10 selections Carissa Dunham and Jayden McBride.

The Victors won most of their games in blowout fashion, including a 54-27 dismantling of WPIAL champ and previously unbeaten Blackhawk in the PIAA quarterfinals following wins over Quaker Valley and Blackhawk.

That set up a showdown with Lansdale Catholic. It was a thrilling game in which Villa led by as many as seven in the second half, and was tied late with two minutes to play. And while the Victors came up just short of a trip to Hershey, it was nevertheless a great effort.

The softball team put the finishing touches on the sports season with a thrilling win over Franklin in the title game in a loaded Class 4A field.

The Victors scored two runs in the first, as an error on Molly Simmerman’s ground ball allowed the first run to come in, and a bases-loaded walk drawn by Emily Dudenhoeffer brought in the second run.

Simmerman led off the top of the third with a triple and scored on Jenna Wagner’s fielder’s choice to make it 3-0.

A Haley Dever RBI single in the fifth made it 5-1 before the Victors held off a late Franklin rally to win 5-3.

The 2022-23 year will mark a new era, but similar results could be on the horizon as well.