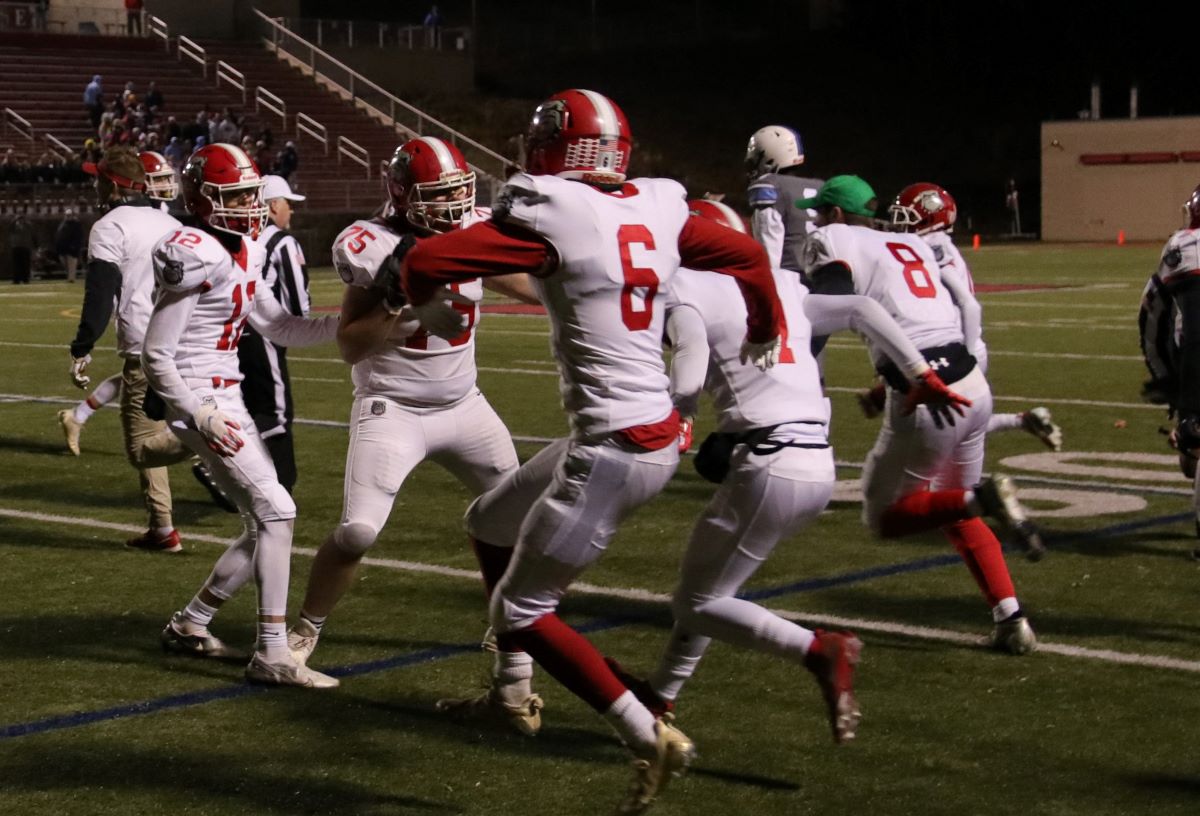 Ashton Kahle (6) and his Redbank Valley teammates celebrate at the end of the game against Bishop Canevin. Photo by Jared Bakaysa of JB Graphics.

PITTSBURGH – The Redbank Valley football team had plenty of special moments on its way to the PIAA Class 1A championship game in 2021, but perhaps none more than their 23-14 comeback win over Bishop Canevin in the semifinals.

The win secured just the third berth for a District 9 team ever in the PIAA championship and the first since 1992 when Smethport accomplished the feat.

The Bulldogs found themselves trailing 14-0 in the second quarter when quarterback Bryson Bain scored on a five-yard run with just under five minutes remaining until halftime to get the Bulldogs on the board.

They trailed by that 14-7 into the third quarter and Canevin looked poised to again take a two-score lead, knocking on the door at the Bulldogs’ 2-yard line. Chris Marshall had other ideas, however. Marshall stepped in front of Jason Cross’ pass near the goal line and raced 98 yards for a Redbank touchdown.

It was a gamechanger for the Bulldogs, who tied the game on Tyson Adams’ ensuing extra point.

And it was that opportunistic defense that stepped up again to help them take the lead.

After Jaiden Torres fumbled at midfield with Brenden Shreckengost recovering at the Redbank Valley 43-yard line with 3:48 to play in the third quarter, the Bulldogs drove 57 yards in nine plays taking the lead, 21-14, on a 1-yard Shreckengost touchdown run 31 seconds into the fourth quarter.

Quite simply, Redbank’s defense was brilliant in the second half. They forced a punt on Canevin’s next possession.

After chewing up nearly five minutes of fourth quarter clock, but missing a field goal that would have given them a 10-point lead, that defense stepped up again.

A Carsen Rupp sack pushed Canevin back to its own seven, which was followed by another sack, this one in the end zone by Joe Mansfield for a safety with 5:08 to play which proved to be the knockout blow to the WPIAL champions.

“It’s a dream,” Marshall said after the game. “We’ve been dreaming of this since we were little kids.”

Coach Blane Gold’s group nearly did the same thing against Bishop Guilfoyle in the state championship game, but after a Bain to Marquese Gardlock touchdown pass tied the game at 14-14 with 4:38 to play (the duo’s second touchdown connection of the game), Guilfoyle quickly drove down the field and scored the game-winning touchdown.

Nevertheless, it was a season and semifinal win for the ages for the Bulldogs.