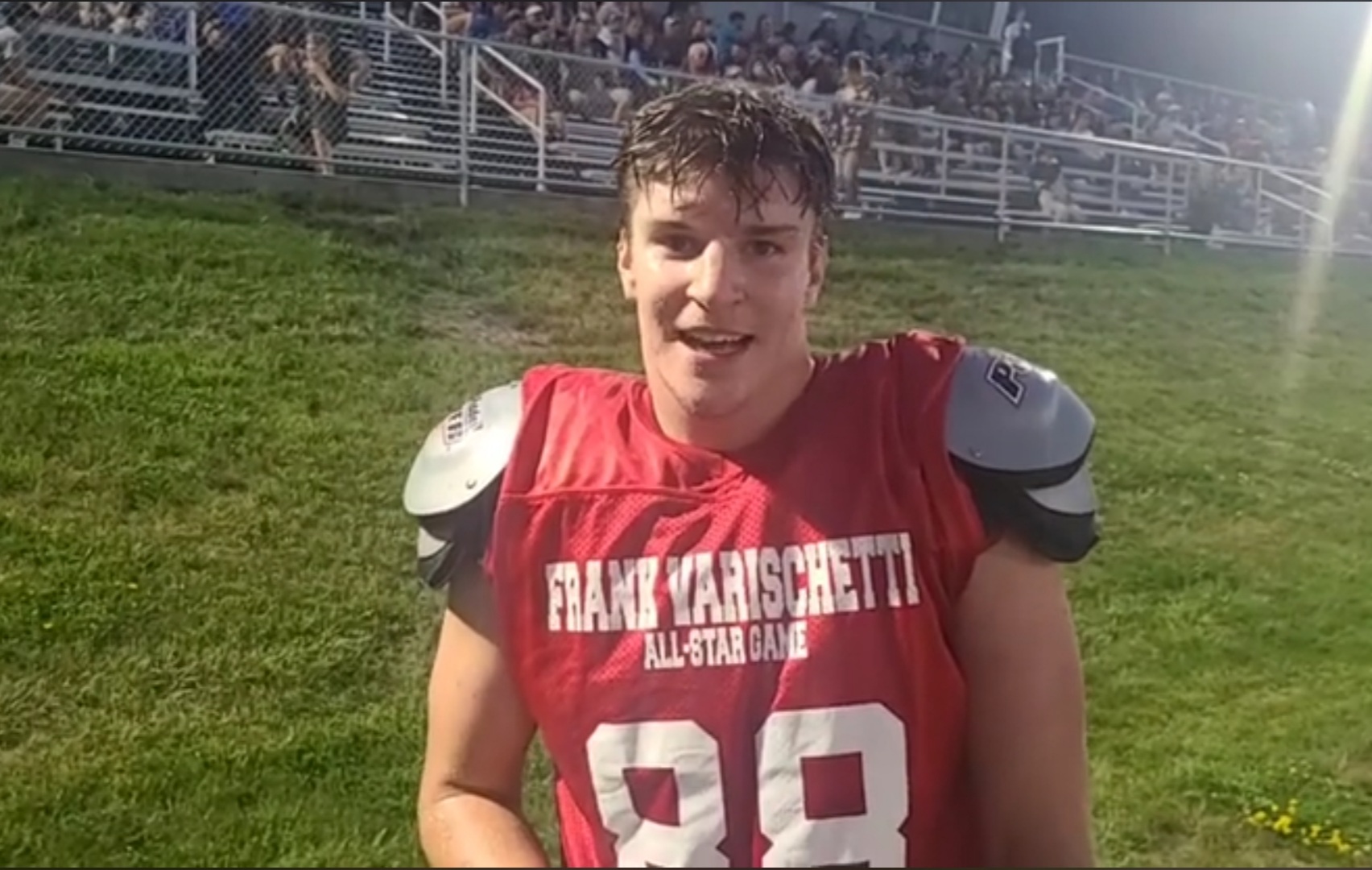 BROCKWAY, Pa. – Facing a 12-0 halftime deficit, the South team showed no panic against its North counterparts in the Frank Varischetti All-Star Football Game on Friday.

Instead, the South scored a pair of touchdowns in the third quarter, getting a 2-point conversion after the first score en route to a 14-12 win in what was an intense battle from Frank Varischetti Field that featured a little bit of everything, including an ejection.

“Some people may disagree, but I think football is at its height when you’ve got some chirping on each side and the crowd is going crazy,” said South head coach Blane Gold of Redbank Valley. “Sometimes all-star games can be a little bland, but I thought we had a little bit of everything that you want to see in high school football.”

The North defense shut down the high-powered attack of the South for each of the first two quarters, but the South finally broke through when Jack Krug (Brookville) unleashed a perfect ball down the right sideline to Dale Kot (DuBois), who made a great catch on the 41-yard pitch-and-catch to make it 12-6. Krug found Nathan Waltman (Karns City), the South’s Offensive MVP, for the 2-point conversion to cut the margin to 12-8.

As the South got the ball back almost immediately, the momentum shift was palpable, as Kobe Bonnano (Redbank Valley), the South’s Defensive MVP, jumped on a fumble at the North 44.

“Just controlling both sides of the line and keeping the momentum going,” said Bonnano about the key to coming back in the second half.

The South was in rhythm at the point, as they needed just six plays to score, with Cal German (Central Clarion County) connecting with Waltman for a 23-yard touchdown. The 2-point conversion was no good, but the South led 14-12, and the defense made sure that lead held.

Ethan Smith (Otto-Eldred) picked off Krug in the fourth quarter, setting up the North at the South 31-yard line with just under five minutes to play.

The South was able to come up with one more big play on defense, however, sacking Ben Briggs on 4th-and-5 with 1:56 to play to put the game in the win column for the North.

“We knew there were just little things we needed to pick up and it was there,” Waltman said. “Any game you play you want to win.”

A victory for the South didn’t look like it was going to be in the cards in the early going. The North shut down the South’s vast array of offensive weapons, limiting them to just 28 yards of total offense in the first half.

Conversely, the North got it going in the air, thanks to Briggs and North Offensive MVP Zuke Smith (Kane).

The North got good field position at their own 48 late in the first quarter and drove 52 yards in seven plays, with Smith connecting with Mitch Reiter (St. Marys) on a 17-yard pitch and catch that made it 6-0 after the failed 2-point conversion attempt.

“This week has been a humbling and honoring experience altogether,” said North head coach Justin Bienkowski of Port Allegany. “I genuinely care about 28 more kids because we had four Port kids. I told them ‘let’s take a family picture.’ They grew on us. I’m so glad Nick Hoffman asked us and I’m so glad I decided to bring our staff. Everything about it was great minus the outcome.”

After forcing a South 3-and-out, the North got the ball back, and immediately went back to work. They went 68 yards in nine plays, chewing up nearly five minutes of the game clock before Briggs found Dom Cherry (Ridgway) from 3-yards out and a 12-0 lead after the 2-point conversion failed.

Later in the quarter, Braedon Johnson (Smethport), who was the North’s Defensive MVP, took a crackback block from Robert Keth (Brookville). Johnson was alright but had to leave the game, and Keth was ejected on the play.

That play illustrated what was at times a chippy affair, and also one that was very even.

“Losing Braedon Johnson, that’s a game-changer,” Bienkowski said. “He’s a high character kid and a heck of an athlete.”

The quarterbacks – Smith and Krug, were their respective teams’ leading rushers with Smith accounting for 60 yards on the ground and Krug 39.

Ryli Burritt (Smethport), who also had a strong game on defense, had 43 yards receiving to lead the North, and Waltman 66 and Kot 56 to pace the South.

All-Star game coverage on D9and10Sports.com is being brought to you by Potter County Family Campground, Hunter Station Golf Club, Triple “S” Recycling, and the Brooks-Huwar-Leadbetter Sportsperson of the Year award.

Frank Varischetti All-Star Football Game Awards 17 $1,000 Scholarships
Longtime Clarion, Central Clarion County Head Coach Wiser Honored at Varischetti Game
We use cookies on our website to give you the most relevant experience by remembering your preferences and repeat visits. By clicking “Accept All”, you consent to the use of ALL the cookies. However, you may visit "Cookie Settings" to provide a controlled consent.
Cookie SettingsAccept All
Manage consent