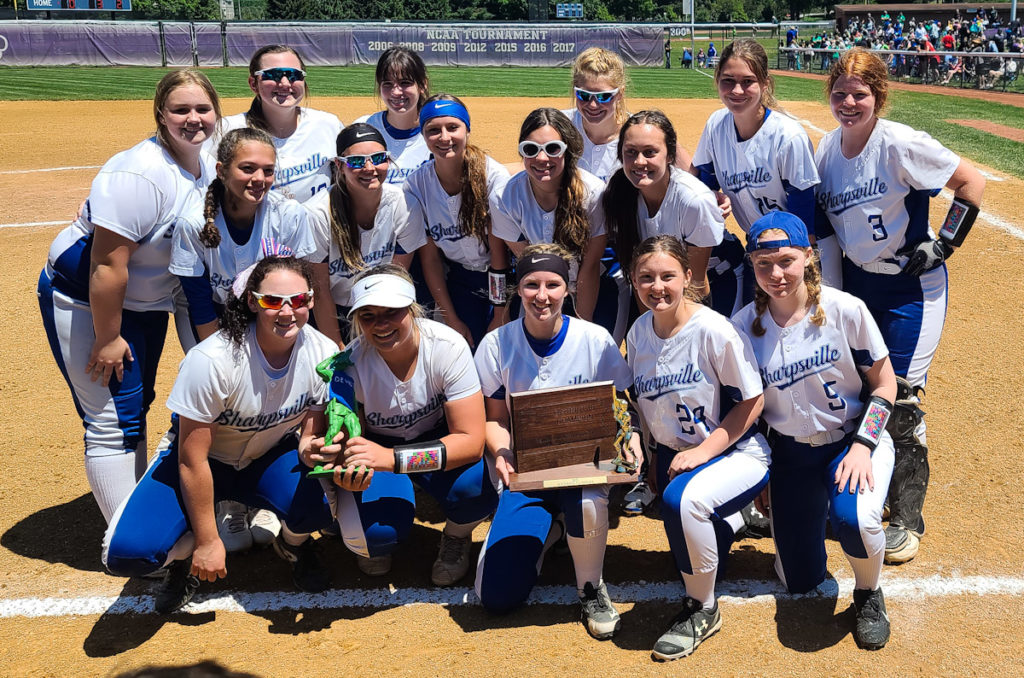 ERIE – Sometimes, all it takes is one.

In Sharpsville’s case, three led to one, and one was all the Blue Devils needed. One run that is, as Sharpsville outlasted Union City, 1-0, to win the District 10 Class 2A softball championship Monday.

Both pitchers, Sharpsville’s Breanna Hanley and Union City’s Abby Tingley were as advertised. The pair gave up just 10 total hits, issued one walk, allowed one run, and struck out 20.

“This is (the type of game) I hoped for,” Hanley said. “It’s just a better game that way.”

Hanley shut out a Union City team that came into the game averaging nearly 14 runs per game.

“She had her ‘A’ game, and when she has her A-game, I know we’re in games,” Sharpsville coach Mark Piccirilli said. “We knew it was going to be head-to-head. We knew what type of pitcher they had and we were ready for it.”

“(The strategy) was to pitch them inside and hope they didn’t crush it someplace that we couldn’t get to,” Hanley said.

Sharpsville had consecutive hits just three times in the game, and the third time was the charm as three straight singles led to Hanley crossing the plate for the decisive run.

“We’ve been in these types of games all season,” Piccirilli said. “We’re coming out of a tough region. We’re used to this, this kind of pressure. We just had them ready.”

With one out in the sixth, Hanley ripped a sharp grounder to third. The ball just got through for a base hit. Ericka Grandy followed with a single to right and Paige Yarian brought in Hanley with a sharp single to short that Union City’s Eliza Reynolds was able to make a sliding stop on, but couldn’t get a throw off.

“It felt so good, it took so much stress off of all of us,” Hanley said.

Reynolds made perhaps the defensive play of the game when Knicely hit a hard ground ball to short. Reynolds fielded the ball and was able to make a tag on Grandy heading to third before firing over to first for the double play.

Emylee Zielinski hit a 1-out single in the bottom of the inning, but Hanley got Cathryn Reynolds to pop out for the second out of the inning. Eliza Reynolds, looking for her third hit of the afternoon, drove a ball to center field, but there was just enough air under it for the fielder to make the catch and end the threat.

Sharpsville had runners on first and second with one out in the first after Hanley and Grandy singled, but Hanley was caught stealing and Tingley got Yarian to strikeout to end the inning.

Eliza Reynolds had a single in the bottom of the inning, but neither team would have another baserunner until the fourth.

Hanley drew a walk to lead off the fourth but was forced out at second when Yarian grounded into a fielder’s choice. Knicely followed with a single to put runners on first and second, but Tingley got Ritenour to strike out to end the inning.

The Bears got a runner in scoring position when Eliza Reynolds hit a 1-out triple in the fourth, but Hanley got Sydney Gilbert and Cyaira Zielinski to strike out to keep Eliza Reynolds stranded at third.

Eliza Reynolds had two of the Bears’ three hits. Tingley took the tough-luck loss as she allowed one earned run on seven hits with a walk and 10 strikeouts.

Hanley, Grandy and Yarian each had two hits. Hanley scattered three hits over her seven shutout innings. She didn’t issue a walk and struck out 10.

Union City will take on the District 3 runner-up (championship game between Upper Dauphin and Brandywine Heights is scheduled for Tuesday) in a sub-regional on Friday, June 4 at Mt. Aloysius.

Sharpsville will take on the No. 3 team out of the WPIAL in the first round of the state tournament, Monday, June 7 at a time and location TBD.