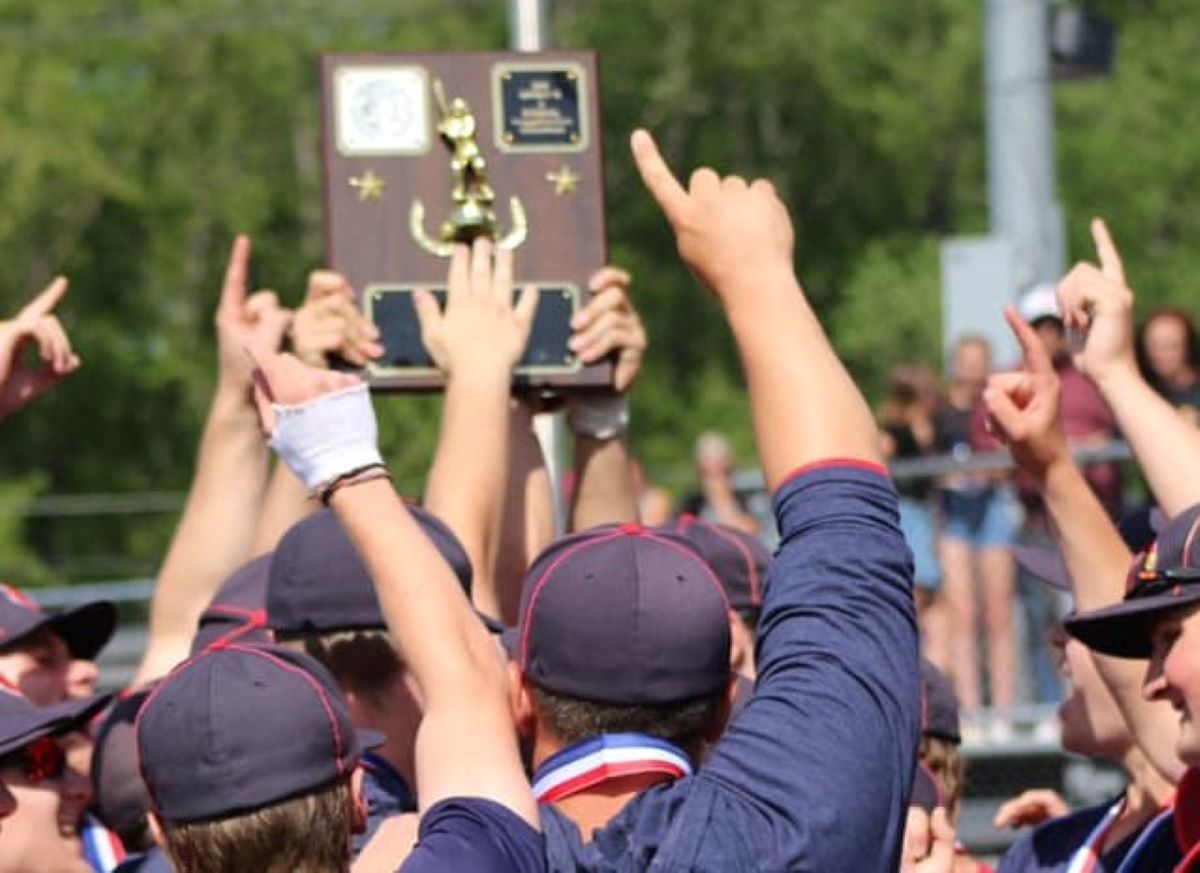 DUBOIS, Pa. – After winning in the District 9 Class 1A semifinals, DuBois Central Catholic’s Carter Hickman talked about how Kaden Brezinski had come in and thrown strikes all year in relief.

Well Brezinski, needless to say, never had a relief appearance like the one he put in Monday in helping DuBois Central Catholic win its third District 9 1A title in its last five tries with a 7-4 victory over defending (from 2019) champion Elk County Catholic at Showers Field in DuBois.

Brezinski replaced starter Brandin Anderson, who was battling a sore shoulder, with no outs and a runner on first in the top of the third inning of a game that was tied at three and proceeded to retire the next 12 batters he faced before a couple of Cardinal errors in the seventh inning made things interesting.

The righty ended up getting the win going five innings of relief allowing one unearned run on one hit – that hit came in the seventh – and one walk – also in the seventh – while striking out three.

“Kaden was absolutely amazing in that situation,” DCC manager Adam Fox said. “I have confidence in Kaden throwing strikes. He is a really good athlete. I have coached him since he was 10. I have been all the way through with him. He has a low heart rate. He is cool, calm, and collected. I knew the situation wasn’t going to be too big. One run in five innings without having any prep knowing he was going to pitch, it says a lot. I can’t say enough how great it was and how much he picked up his teammates today. Hats off to him for having guts and getting it done for us. It was just brilliant.”

Fox also praised Anderson’s willingness to admit something didn’t feel right – he said the team will monitor Anderson over the next few days before accessing where he is at.

“It was really big and mature on Brandin’s par to say something wasn’t feeling right,” Fox said.

Things did get interesting for Brezinski in the Cardinals in the seventh thanks to the two errors – one on third baseman Zach Spellen and one on shortstop Damon Foster – in the seventh with DCC ahead 7-3 at the time.

The error on Foster with two outs on a ball hit by David Anderson would have ended the game.

Instead, ECC had runners on first and third and scored on a base hit to center by David Zambranini to cut the deficit to 7-4.

Brezinski then issued his only walk of the game – to Luke Ginter – loading the bases and bringing the go-ahead run to the plate in the person of Jordan DePrator.

But Brezinski got DePrator to foul out Spellen to clinch the Cardinals’ first title since 2018 – they also won the 2016 championship.

Fox said he gave some thought to removing Brezinski but liked how the righty was throwing.

“I thought about it,” Fox said. “But his pitch count was down and he was throwing strikes. My philosophy is throwing strikes, filling up the zone, you should get rewarded. We didn’t make the plays behind him. Fortunately, Kaden bounced back. He told me he was feeling great, and he had a good feel for his curveball. We needed one more out, and I know his fastball is hard to square up.”

A three-run bottom of the sixth helped make the seventh a little more comfortable for DCC with Hickman’s two-out triple to right giving the Cardinals a 7-3 lead.

Hickman led the Cardinals’ offense going 2-for-3 with a walk, the triple, and three RBIs.

“Carter Hickman, with his approach at the plate, he is the best pure hitter in District 9, to me,” Fox said. “He always had good at-bats. He is a tough out. He squares the ball up. When he is up, you have to always make pitches to him. He has a great approach. He buys into our philosophy. That s what propels him. He has been huge for us in the playoffs. Really, he has been huge for us all year.”

It was a Hickman single in the bottom of the second that tied the game at three after ECC had touched up Anderson for three runs in the top of the inning to take a 3-2 lead.

Tommy Slay had a two-run single in the second for ECC, while Anderson gave the Crusaders the lead with an RBI base hit.

But Matt Pyne, who scored three times while drawing a pair of walks, walked for the second time in the game with two outs in the second, stole second, and score on the Hickman base hit.

“He is such a pesky leadoff hitter,” Fox said. “He just battles and grinds. When he gets on, you know he is going to run. He is the guy who gets us going. If he gets on, we know we have an opportunity.”

DCC used some small ball to take the lead for good in the third when Anderson was hit by a pitch moved to second on a sac bunt by Foster, went to third on a single by Brezinski, and scored on a Ben Gritzer groundout.

Brezinski helped his own cause by going 2-for-3.

David Anderson was 2-for-4 for ECC with a double and an RBI.

DCC, which entered the postseason 7-11 and as the No. 5 seed, is starting to play well at the right time, according to Fox.

“I told them at the beginning of the year that we were going to be chasing .500 all year,” Fox said. “I said if we can stay around .500, I promise I will get you peaking at the right time. We told them to just follow through with me, work with the coaching staff, and don’t get too low. We are now learning how to win.”

DCC will face the third-place team out of the WPIAL, either Eden Christian or Jefferson-Morgan, in the first round of the PIAA playoffs Monday, June 7, at a District 9 site.

ECC also advances to the PIAA playoffs where it will take on the WPIAL champion, either Union-New Castle or Riverview, Monday, June 7, at a WPIAL site.

Rally Caps: Cambridge Springs Scores 5 with 2 Outs in the Fifth to Top Saegertown Powered by North Washington Rodeo
Sharpsville Wins D10 Class 2A Title in Pitcher’s Duel Powered by North Washington Rodeo
This website or its third-party tools process personal data.In case of sale of your personal information, you may opt out by using the link Do not sell my personal information.
×
Manage consent