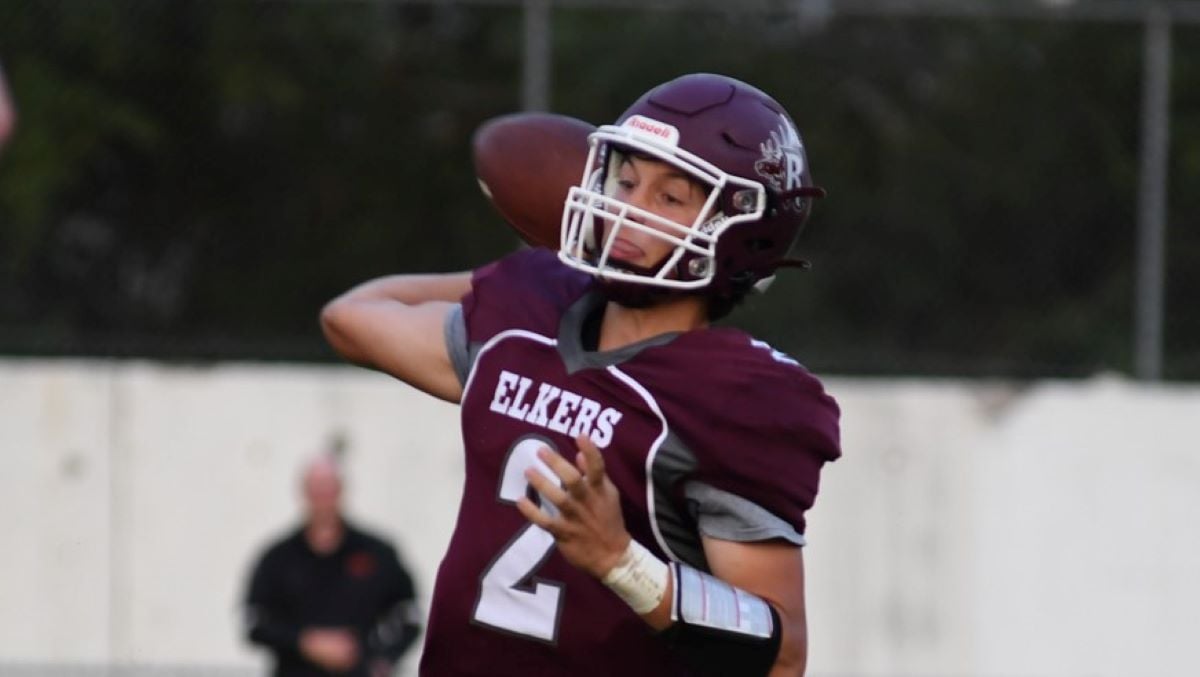 Cameron Larkin's 1-yard TD run with just over 6 minutes to play lifted Ridgway to its first win of the season Friday. Photo by Allison Crowe of JB Graphics

KNOX, Pa. – Ridgway scored two fourth-quarter touchdowns, and Luke Zimmerman came away with a game-saving interception in the end zone to help the visiting Elkers pick up their first win of the season, 26-20, at Keystone.

Ridgway (1-5) trailed 20-13 going to the fourth quarter, the same score as at halftime, but a 37-yard touchdown run by Aiden Zimmerman 1:50 into the quarter tied the game at 20.

The score came one play after the Elkers had a punt return for a touchdown negated by a block in the back.

Then with 6:22 left, quarterback Cameron Larkin snuck the one in from the 1-yard line to give Ridgway the lead, 26-20.

Keystone had three possessions in the final six minutes, but two of them ended on interceptions, including Zimmerman’s interception of a Drew Keth pass into the end zone from the Ridgway 20 in the waning seconds.

Isaiah Jackson also intercepted Keth right after the Larkin touchdown, but an Aiden Zimmerman fumble inside the 20-yard line gave Keystone the ball back.

The Panthers (4-2) drove to the Ridgway 42 before turning the ball over on down.

But Keystone’s defense got the ball back late, and without timeouts, the Panthers drove to the 20-yard line before Luke Zimmerman spoiled the comeback.

The first half was the Tyler Albright show for shorthanded Keystone, which was without leading rusher, Kyle Nellis, and starting quarterback, Rayce Weaver.

But Albright scored three first-half touchdowns to help stake the Panthers to the 20-13 lead in a back-and-forth half.

His 90-yard kickoff return to start the game gave Keystone a 6-0 lead.

But Ridgway answered with an 11-yard Luke Zimmerman touchdown run to tie the game at six at the end of the first quarter.

Keystone went back ahead, 12-6, when Keth hit Albright in stride from 62 yards out.

The Elkers again answered this time with a 17-yard Larkin to Aiden Zimmerman touchdown pass that combined with Aiden Zimmerman’s two-point run gave Ridgway a 13-12 advantage.

The Panthers responded with an 8-yard Albright scoring run and a two-point pass to Albright to take the halftime lead.

DUKE CENTER, Pa. – Andrew Schenfield threw for 255 yards and three touchdowns to help Otto-Eldred to a 54-20 win over visiting Sheffield.

Hunter App, meanwhile, ran for a pair of touchdowns and caught a touchdown pass for the Terrors (4-2), who beat Sheffield (0-5) for the second time this season.

App ran eight times for 70 yards and caught one pass for 71 yards.

Jeremiah Richardson also scored on the ground for the Wolverines but was held to negative one-yard rushing on 13 carries.

NEW BETHLEHEM, Pa. – Drew Byers ran for two touchdowns and Cam Wagner threw for three scores, but it was the Redbank Valley defense that keyed its 38-8 win over Union/A-C Valley on Homecoming Night.

The 6-0 Bulldogs limited the Falcon Knights to just 67 yards of offense through three quarters and got the PIAA Mercy Rule running clock running after putting up their final points of the game at the end of the third quarter for a 38-0 lead.

Byers, the Allegheny Grille of Foxburg Player of the Game, ran for 106 yards on 12 carries, most of that coming in the second half while Wagner completed 19 of 23 passes for 150 yards, two of his TD strikes going to Ashton Kahle covering 9 and 16 yards. Mason Clouse caught the other TD pass covering 55 yards. Kahle caught five passes for 63 yards.

Wagner talked about the win

Owen Clouse booted a 30-yard field goal to give the Bulldogs a 17-0 halftime lead before scoring three times in the third quarter on Kahle’s 16-yarder and Byers’ TD runs of 3 and 7 yards.

The Falcon Knights (3-3) scored on Owen Bish’s 18-yard TD pass to Zach Cooper in the fourth quarter. Bish ran in the two-point conversion.

Dawson Camper led the Falcon Knights with 39 yards on 11 carries but left the game early in the third quarter with an injury.

BROCKWAY, Pa. – Noted for their passing attack, it was the Brockway ground game that paved the way in a 41-6 win over Brockway.

Dylan Hanna scored three first-half touchdowns and Jendy Cuello rushed for 175 yards and a score for the 3-3 Rovers.

Cuello was named the Allegheny Grille of Foxburg Player of the Game and talked about the win.

Hanna scored on runs of nine and 23 yards, the latter of which came on fourth down, as did a 9-yard touchdown pass from Brayden Fox.

Cuello carried the ball 14 times for 96 yards in the first half and put the finishing touches on his game with a 2-yard touchdown run in the fourth quarter.

Smethport’s Preston Alfieri through a touchdown pass of ten yards to Aiden McKean with 1:18 to go in the first half. All of Alfieri’s 107 passing yards went to McKean before Alfieri had to exit the game due to injury early in the third quarter.

The Hubs (1-5) were banged up throughout the evening, with McKean taking most of the snaps at quarterback in the second half.

Carter Hickman and Landon Thompson also scored on touchdown runs in the second half for Brockway.

For the Rovers, Hanna finished with nine carries for 75 yards, while Fox was 8-of-13 for 75 yards, one touchdown, and two interceptions. Alex Carlson had four receptions for 50 yards.

Alfieri and McKean had the interceptions on defense for Smethport.

The Warriors (2-4) trailed 19-7 four minutes into the second half against a Bradford team that was trying to break a 23-game losing streak.

But Moniteau scored twice before halftime to take a 22-19 halftime lead thanks to a 10-yard David Dessicino to Matthew Baptiste touchdown pass on fourth-and-goal with 18 seconds left in the half.

Hunter Stalker, whose 32-yard touchdown run helped get the Warriors back in the game, ran 24 times for 156 yards and a score, while Logan Campbell, who scored the lone second-half touchdown, had 16 carries for 87 yards and a touchdown.

RENOVO, Pa. – Malaki Zucal went over 100 yards rushing and caught a touchdown pass and Maddox Baughman ran for two touchdowns and threw for a touchdown to lead visiting Cameron County to its first win of the year, 34-14, at Bucktail.

Zucal ran 16 times for 110 yards and caught one pass for 14 yards and Baughman was 4 of 7 passing for 53 yards while rushing five times for 25 yards.

Tanner Pettingill ran 16 times for 147 yards and a touchdown for Bucktail (2-3) with Braylon Fantaski adding nine carries for 48 yards and a score.

Meanwhile, the Clearfield defense limited Huntingdon (1-5) to 43 yards on 37 plays including negative 7 yards rushing on 17 carries. The Bearcats had just two first downs compared to 19 for Clearfield (5-1), who had 459 yards of offense.

Isaac Samsel, one of the leaders of the Clearfield defense, talked about the victory on the Generational Wealth Management Extra Point Show.

PUNXSUTAWNEY, Pa. – Justin Miller scored a pair of touchdowns and Seth Moore threw for a touchdown and ran for a touchdown, as Punxsutawney rolled past visiting DuBois, 23-0.

Miller scored on a 56-yard run in the first quarter and caught a 9-yard pass from Moore midway through the fourth quarter.

Moore added a 1-yard touchdown run early in the second quarter for the Chucks (3-3), who broke a 3-game losing streak.

Peyton Hetrick also booted a 42-yard field goal late in the first half for Punxsutawney giving it a 16-0 halftime lead.

The Chucks’ defense, meanwhile, held DuBois (4-2) to around 110 yards of total offense.

Evens, the Gators’ QB, scored on carries of 23, 7, and 15 yards, while Stiles went 77 yards to the house to open the second half after Ricky Zampogna had cut a 12-0 Port Allegany (5-1) halftime lead in half with a 3-yard scoring run midway through the third quarter.

Evens ran 12 times for 88 yards and was 9 of 17 passing for 70 yards with an interception, while Blaine Moses added 14 carries for 85 yards and Noah Archer 10 carries for 48 yards.

ALLPORT, Pa. – A blocked extra point midway through the fourth quarter proved to be the difference in West Branch’s 32-31 win over visiting Curwensville.

It was a massive night for West Branch quarterback Tyler Biggans, who ran 35 times for 292 yards and four touchdowns.

McGarry tried to match Biggans with both his arm and his legs.

The Tide QB accounted for 241 yards of total offense and four touchdowns including 160 through the air with three scores and another 81 on the ground with a touchdown.

Irwin went over 100 yards rushing (14 carries, 117 yards) with a touchdown and also had the touchdown catch.