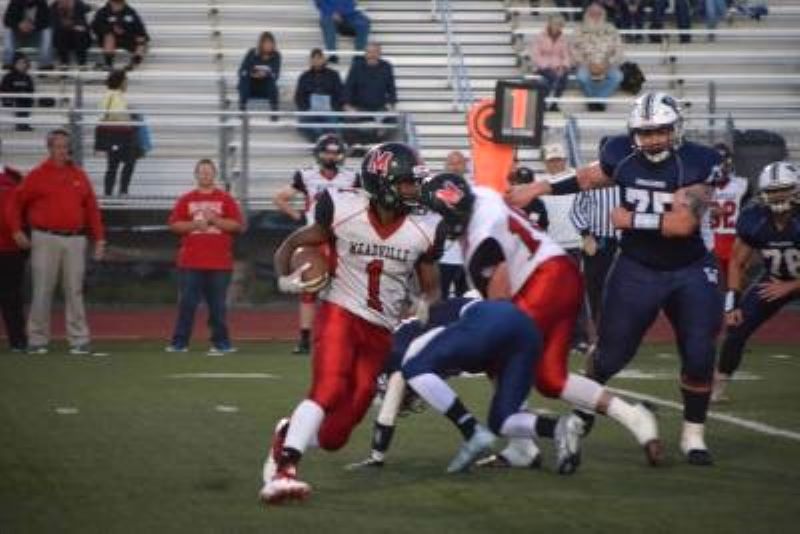 OIL CITY, Pa. – Meadville’s Khalon Simmons and Brady Walker combined for over 300 yards on the ground as the Bulldogs took complete command of Region 4 with a 35-0 win over Oil City.

In the process, the Bulldogs were able to curtail star Oil City running back Ethen Knox, limiting him to 96 yards. The Meadville defense has yielded just seven points in its last four games, including three shutouts.

Simmons scored four touchdowns in the game, three of which came in the first half on runs of 4, 10 and 44 yards as Meadville built a 21-0 halftime lead.

Simmons put the finishing touches on his night with a two-yard run with just under three minutes to play.

Knox got his 96 yards on 19 carries after eclipsing 400 yards in each of his last four games.

The Ramblers built a 35-0 halftime lead, putting the running clock into effect in the second half and snapping McDowell’s three-game winning streak in the series in the process.

Prep (4-2), got a 32-yard touchdown run from Suhtaun Lewis sandwiched in between touchdown passes of 15, 39, and 12 yards from Costello to Lewis.

RJ Roberts put the finishing touches on the brilliant first half for the Ramblers with a 35-yard interception return for a touchdown.

Costello finished 13-of-25 through the air for 228 yards and three touchdowns.

For McDowell (4-2), Artis Simmons carried 26 times for 120 yards, while Ray Jackson had two receptions for 23 yards.

FARRELL, Pa. – Kabron Smith had a night for the record books against Wilmington.

All the junior did was throw for 400 yards on 16 completions, breaking the single-game program record previously held by Isaac Clarke set in 2017.

Lamont Samuels and Kylon Wilson both had big hands in the effort for the Steelers, who improved to 5-1 with the win.

Samuels had half of those receiving yards and also scored a touchdown and kicked a field goal, while Wilson added three more touchdowns to his season total and finished with 111 yards receiving.

SHARON, Pa. – Caullin Summers combined for over 300 yards passing and rushing as Sharpsville moved to 6-0 with a 49-27 win over Sharon.

Sharon got within seven, 28-21 on Jayveerh White’s 69-yard touchdown runs in the third quarter, but Sharpsville rattled off the next 21 points courtesy a pair of Braedon Summers’ short touchdown runs and an 8-yard scoring strike from Summers to Blaze Campbell.

Braedon Summers also caught a touchdown pass from Caullin, the latter of whom also had a 2-yard touchdown run.

Mikey Rodriques had two touchdown runs in the first half for Sharon and added a late touchdown pass to Lamont Austin.

Caullin Summers finished with 128 yards on the ground and 249 through the air, while Garen Levis had 100 yards receiving.

White had 175 yards rushing for Sharon.

RUSSELL, Pa. – Benji Bauer rushed for just shy of 300 yards and three touchdowns as Eisenhower stayed unbeaten with a 33-7 win over Mercyhurst Prep.

Eisenhower scored twice in the final four minutes of the half to take a 21-7 lead into halftime on Bauer’s 20-yard run, followed by his 9-yard scamper.

Shawn Pascuzzi threw a touchdown pass to Kris Bunk and Bauer had his third touchdown run of the game in the second half.

Pascuzzi finished 6-of-10 through the air for 103 yards and also rushed for 22 yards, while Kris Bunk had five receptions for 78 yards.

David Bahm was 8-of-18 passing for 101 yards, one touchdown, and two interceptions for Mercyhurst Prep. The score came on a 2-yard touchdown pass to Josh Wingenbach with just over four minutes to play in the first half.

Kingerski’s boot was the only points in the second half for the Rockets (4-2).

Slippery Rock built a 20-14 halftime lead on the strength of three William Mokel touchdown passes. Mokel hit Maddox Allen for a 65-yard score in the first quarter, followed by a 10-yarder to ohn Sabo and a 5-yarder to Eli Anderson in the second quarter.

Hickory got on the board first thanks to a Will Acrie punt return for a touchdown and scored again in the second quarter on Zander Telesz’s 36-yard touchdown run.

The Hornets’ tied the game with 5:05 to go in the fourth quarter on Ty Holland’s 7-yard strike to Telesz.

Telesz combined for over 100 yards rushing and receiving for Hickory.

Nyquist scored on runs of 7 and 12 yards in the first half as Warren built a 20-7 lead. That score held until the fourth quarter when Sam Harvey scored on a 1-yard run and Eric Dippold threw a 20-yard touchdown pass to Cayden Wright.

Ethan Senz had a 12-yard touchdown run for Warren (3-3) in the second quarter and finished with 69 yards rushing.

Franklin’s lone touchdown came in the second quarter when Hunter Marstellar connected with Cole Buckley on a 63-yard strike.

Dippold finished with 101 yards through the air for the Dragons.

Mattocks scored on a fumble return, as well as a 17-yard touchdown run in the second quarter.

Leading 14-13 at halftime, Preston Gorton scored on a 37-yard blocked punt to put the Blue Devils up 21-13. Later in the quarter, Brandon Gorton took an interception 37 yards to the house.

The Blue Devils (4-2) scored two more times in the fourth quarter, as Brett Kania scored on a 70-yard kickoff return and Van Jones scampered in from 16 yards out. Sandwiched in between was a Sully Zirkle touchdown run for Saegertown.

Kania had a touchdown pass and a touchdown reception in the first quarter, as Gorton caught his pass and he was on the receiving end from Morgan Applebee.

Saegertown (1-5) scored on a pair of rushing touchdowns in the second quarter from Reese Wilkinson and Luke Young.

Kyle Birkmire had a 90-yard kickoff return for a touchdown for the Lancers and Ian Salisbury a blocked punt return for a score as the two teams traded scores in the first quarter.

The Lancers, however, rattled off 21-straight points over the final three quarters, thanks in large part to Dylan Sheeder.

Sheeder found Birkmire for a 45-yard touchdown pass in the second quarter and scored on a 25-yard run in the third quarter.

Salisbury put the finishing touches on the win, scoring the same way he did in the first quarter, this time from 30 yards out.

Mason Savitz’s 1-yard touchdown run and the ensuing extra point with 1:35 to play proved to be the difference.

Nolan Carey also threw a touchdown pass to Rylan Smith for the Beavers.

Fairview built its halftime lead thanks in large part to Tyler Corbin, who had a rushing touchdown and also a touchdown pass to Jeremy Frazao.

Luke Lawson caught one of those touchdown passes and finished with 129 receiving yards.

Wyatt Carver and Kai West had two rushing touchdowns apiece for the Raiders.

GIRARD, Pa. – Fort LeBoeuf pulled away in the second half for a 36-7 win over Girard.

The Bison broke open a two-score game in the fourth quarter, as Connor McChesney hit Ryan Welka for a touchdown, followed by a Justin Leuschen touchdown run.

Leuschen was once again over 100 yards in the win.

COCHRANTON, Pa. – Mitchell Tingely rushed for 211 yards and a pair of touchdowns as Lakeview earned a 35-14 win over Cochranton