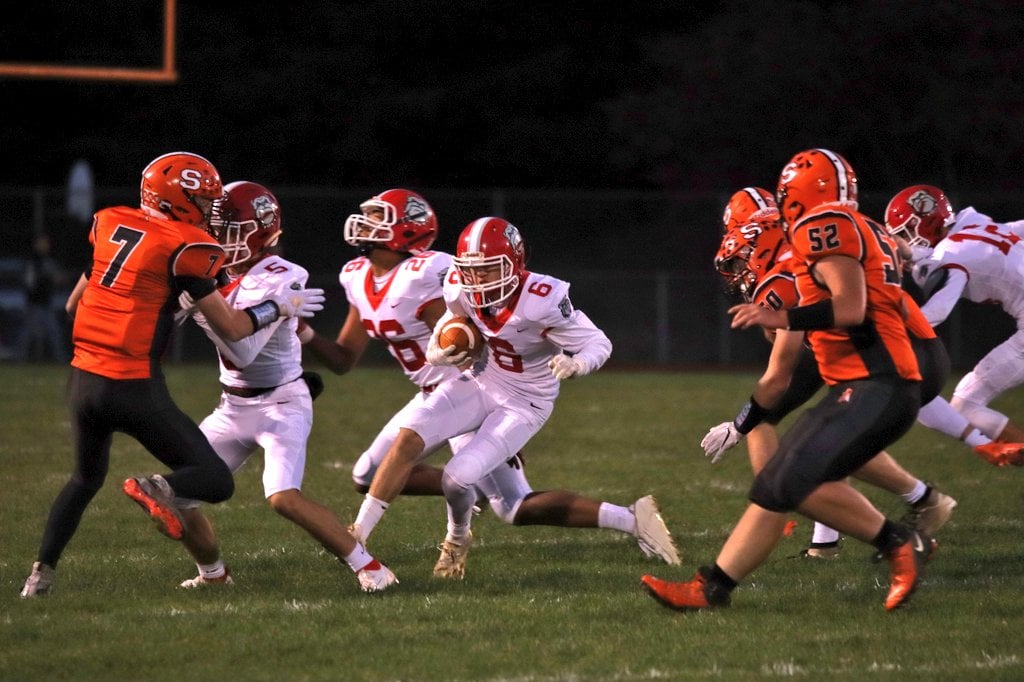 SMETHPORT, Pa. – Struggling to move the ball in the first half against Smethport, Redbank Valley decided at halftime to put the game in the hands of its offensive line.

The boys up front, along with running back Ray Shreckengost imposed their will in the second half against the Hubbers, turning an 8-6 halftime lead into a major statement, a 27-6 road victory in a rematch of last season’s D9 Class 1A title game.

“We just said we were going to make a decision to make a commitment to run the football,” said Redbank Valley coach Blane Gold. “That’s been a group (the offensive line) we’ve put the most amount of pressure on this year because we have such high expectations for them. We knew coming into the game they were going to be a key. They just did a fantastic job down the stretch.”

The Bulldogs led at halftime on the strength of an Ashton Kahle 74-yard punt return for a score in the first quarter and a successful 2-point conversion pass from Gunner Mangiantini to Marquese Gardlock.

Noah Lent engineered a drive at the end of the half for the Hubbers (5-1), connecting with Brandon Higley on a 9-yard score with 1:09 to play before the half to make it 8-6.

The Bulldogs had just a pair of first downs in the first half, but their first drive of the third quarter set the tone.

They rode the aforementioned offensive line, as well as Shreckengost to an opening drive touchdown in the third. That gave them a 15-6 lead and momentum they didn’t relinquish.

Shreckengost had 17 yards rushing on four carries in the first half, but finished the game with 125 yards on his way to Allegheny Grille of Foxburg Player of the Game honors.

On the other side of the ball, the Bulldog defense, led by the likes of Joe Mansfield, Shreckengost, Kolby Barrett and others, clamped down. The explosive Lent had 98 yards rushing in the first half. He finished the game with 93.

“That’s our pride and joy,” Gold said of his defense. “Nine (Lent) is a tremendous athlete and we’ve been reading a lot about him. It was an opportunity that our guys were excited about tonight to take on the guy that’s been putting up video game numbers. I couldn’t be more proud of the guys that have been in our system for four years. And if you look at the matchups against this very good offense, I believe that’s 12 total points in three matchups. That’s saying a lot to the effort of those guys because that (Smethport) is a very, very good offense.”

Rewatch the second half:

The Bulldogs forced a pair of second-half turnovers, including an interception by Kahle off a deflection by Gardlock, and the offense took advantage.

The passing game was limited in the first half, but quarterback Bryson Bain was able to connect with Chris Marshall on a 24-yard pitch and catch for a touchdown late in the third quarter to make it 21-6.

“So many guys were in maybe a few times but had a huge impact,” Gold said. “Chris Marshall still trying to come back from an injury. He was in for four plays and had two huge catches including the touchdown.”

Shreckengost put the finishing touches on his night with a 3-yard scoring plunge with 1:49 to go in the game.

Ryan Mason had 36 yards on the ground for the Hubbers, while Travis Cooney had a strong game defensively.

“This was huge,” Gold said. “We’ve regrouped (since the loss to Keystone to open the season) and we said no disrespect to those other teams we played, but we felt like we had three games before we got to Brockway and Smethport to work out some kinks. There were nights where we relied on Bryson’s arm because we were struggling with the run game. And tonight, we got the run game going and when we called on Bryson he made some big throws.”

Knox Sets Oil City Single-Game Rushing Record of 484 Yards in Win Over Franklin
Oct. 2, 2021 Football: Keystone Stays Perfect With Win over Sheffield
This website or its third-party tools process personal data.In case of sale of your personal information, you may opt out by using the link Do not sell my personal information.
×
Manage consent