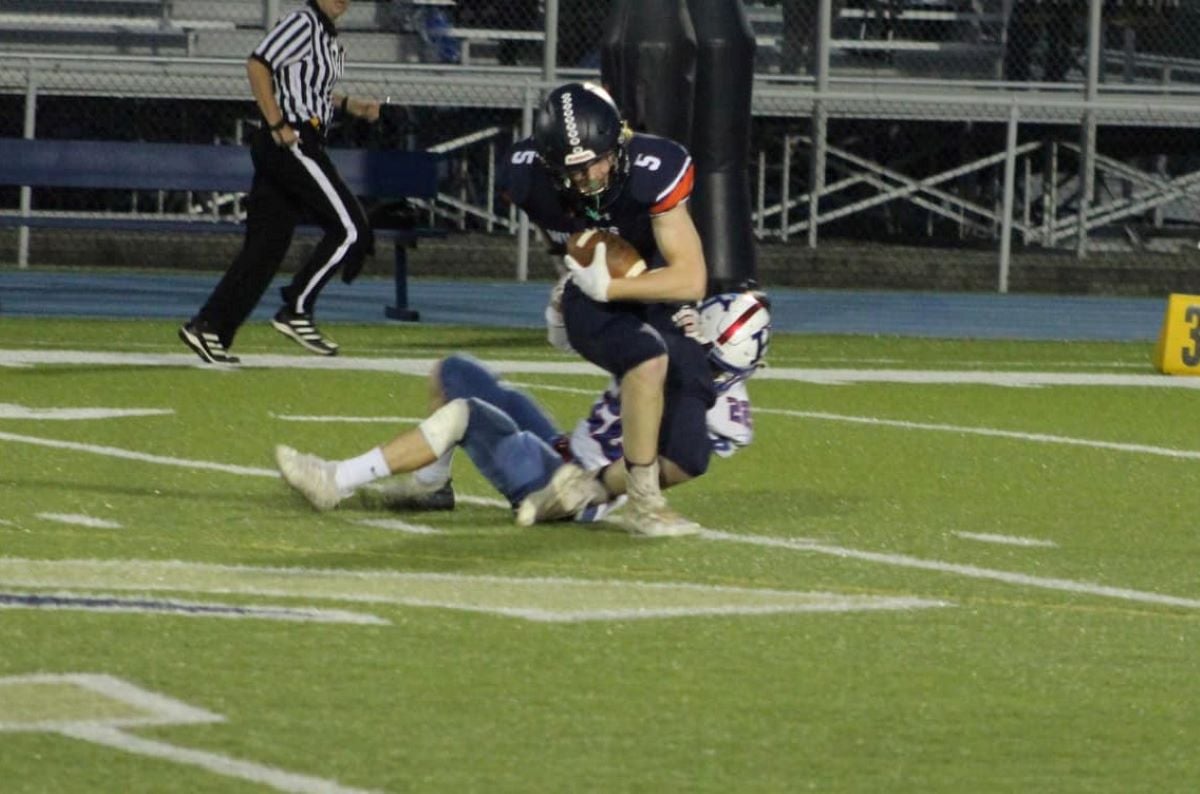 Christian Simko of Central Clarion brings in one of his five catches for 160 yards Friday night. He scored twice in the game. Photo by Nathan Girvan

CLARION, Pa. – Jase Ferguson passed for three touchdowns and ran for one to lead Central Clarion to its first win of the season, 34-26, over Kane at Clarion University’s Memorial Stadium Friday night.

Ferguson completed 10 of 19 passes for 241 yards, hitting Christian Simko for two touchdowns, 40 in the first half and 72 yards in the fourth quarter that gave the Wildcats (1-4) a 34-20 lead with 9:16 remaining. Simko caught five passes for 160 yards and had one of the Wildcats’ three interceptions on defense. Ferguson’s other TD went to Ashton Rex from 42 yards out, putting the Wildcats up 27-14 less than two minutes into the second half.

Addison Plants ran for two of Kane’s touchdowns on runs of 5 and 3 yards, finishing with 54 yards on 12 carries. Quarterback Harley Morris threw a 31-yard TD pass to Sam Lundeen in the second quarter. Morris ran for a team-high 76 yards on 10 carries while completing 7 of 19 passes for 102 yards.

The Wolves (3-3) set the final score with just under two minutes remaining when Ricky Zampogna scored on a 5-yard run. He ran for 67 yards on 15 carries.

Allegretto scored on three touchdown runs (49, 15, 52 yards) and returned a punt 60 yards for a touchdown return to help the Elkers (5-1) pull away in the second half. He ran 10 carries for 144 yards on the night and had 24 yards receiving.

His 15-yard touchdown run in the third quarter helped the Elkers build a two-score lead after a 1-yard Noah Weaver run had gotten Punxsutawney (0-5) to within eight, 21-13.

Weaver ran 11 times for 26 yards and a score and was 5 of 13 passing for 39 yards and a touchdown, while Seth Moore was 4 of 8 for 82 yards, including a 23-yard touchdown pass to Peyton Hetrick, who had 38 yards of receiving in the night.

Jonathan Hinton was 11 of 17 passing for 190 yards and two touchdowns for Ridgway. Eric Salberg ran seven times for 60 yards, while Will Howard caught three passes for 76 yards and a touchdown.

ST. MARYS, Pa. – Maddox Baughman threw for a touchdown and scored on a pair of short touchdown runs to lift Cameron County to a 32-18 road win over Elk County Catholic.

Baughman threw a 22-yard touchdown pass to Dylan Baney to start the scoring and then added scoring runs of 6 yards and 2 yards in the second quarter to give the Red Raiders, who are 4-1 on the season, a 20-0 halftime lead.

Dylan Rieder (3 yards) and Lathan Reed (28 yards) then added touchdown runs in the second half for Cameron County.

Baughman was 5 of 6 passing for 84 yards, a touchdown, and an interception, while Reed ran 19 times for 135 yards and the score and had one catch for 47 yards.

Thanks in part to the long run, Cherry ran 18 times for 137 yards for the Crusaders (2-3) while Paul was 5 of 14 passing for 64 yards, the touchdown, and an interception. Reynolds caught three passes for 46 yards and the score.

The fourth win secured Cameron County’s first four-win season since 2014 when the Red Raiders finished 4-6. The 4-1 start is Cameron’s best start since starting the 2009 campaign 9-0 on its way to a 10-2 record.

Culvey got the scoring started for the Falcons with a 2-yard run midway through the first quarter before Ayers scored the next three Coudersport touchdowns to put the home team up 30-6.

Bucktail (0-5), which got a pair of first-half touchdowns from Zack Pick (81-yard kickoff return and 19-yard touchdown pass from Dylan Cross).

But Coudersport put the game away in the fourth quarter on scoring runs from Kelly (7 yards) and Ott (36 yards) to make it 44-18 before Cross scored from a yard out to set the final score.

Kelly added 14 carries for 62 yards for the Falcons with Ott rushing six times for 55 yards.

Mason ran eight times for 15 yards and the score.

The Bison (6-0), one of just two remaining unbeaten teams in District 9 (4-0 Keystone which plays at Sheffield Saturday is the other one), led 35-0 at halftime meaning the Mercy Rule was running the entire second half.

Billotte was 8 of 16 for 88 yards also throwing an 18-yard touchdown pass to Nate Natoli.

Philipsburg-Osceola fell to 2-4 with the loss.

Krug completed 11 of 21 passes for 189 yards, connecting twice with Brayden Kunselman on TD strikes of 36 and 23 yards. He also threw first-half TD passes to Cooper Shall covering 23 yards and Noah Peterson that started the scoring from 41 yards out.

Krug’s scoring run came on a 1-yarder while Joe Shields set the final score late in the game with his 57-yarder. He led the Raiders’ running game with 71 yards on four carries.

FOXBURG, Pa. — Trailing 8-6 going into the second half, Union/A-C Valley scored 35 unanswered second-half points as it pulled away for a 41-8 win over Port Allegany at A-C Valley.

The Gators (2-3), playing just four days after their win at Coudersport on Monday, took their only lead of the game on Blaine Moses’ 1-yard run and a Gators two-point conversion before halftime. From there, it was all Falcon Knights, and quickly.

In a span of five Falcon Knights (4-1) offensive plays from scrimmage, they scored four touchdowns. Dawson Camper, who led the way with 225 yards on just 13 carries, scored the first of three TDs when he capped a seven-play, 65-yard drive with a 3-yard run.

After a Caden Rainey 31-yard punt return to the Port 18, Camper ran it in on the next play to put Union/ACV up 20-8. Then on the second play the next time the Falcon Knights got the ball and after a Camper 47-yard run, quarterback Bailey Crissman scored on a 7-yard run to make it 26-8.

On their first offensive play of the fourth quarter, the Falcon Knights scored again on Camper’s final TD run covering 64 yards, finishing off a productive set of plays. Later in the fourth, Ethan Palmer set the final with his 5-yard run.

Crissman completed 5 of 13 passes for 39 yards with an interception. He ran for a 1-yard TD run in the first quarter for a 6-0 lead before the Gators went up 8-6 Moses’ run. After running for 371 yards in Monday’s win, he finished with 78 yards on 20 carries. Quarterback Drew Evens completed 15 of 26 passes for 119 yards and also intercepted a pass on defense. Peyton Stiles caught eight passes for 45 yards with eight tackles on defense.

Braxton Adams and Justin Bankovich picked off passes and returned them for touchdowns on back-to-back Owls offensive plays in the second quarter, Adams’ pick-six going for 84 yards. Austin Mitchell also ran for a 74-yard score as the Beavers led 28-0 by halftime.

Brendan Orr, Dalton Yale, and Garrett Nissel ran for touchdowns in the second half for the Beavers.

The Rovers (2-4) led 26-0 in the fourth quarter before Otto-Eldred (1-4) scored its only points on Gavin Jimerson’s 47-yard TD pass to Manning Splain.