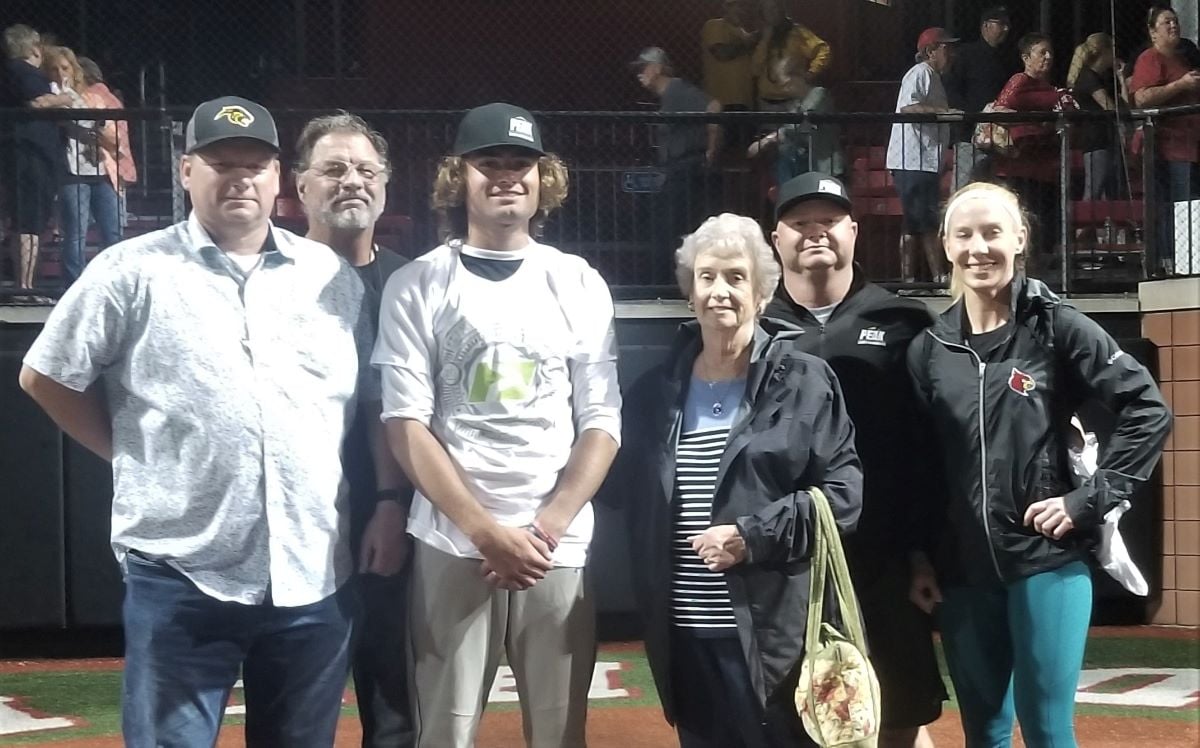 In the end, it was the Eagles, led by Prime Fitness USA Player of the Game Cole Sebastian (Otto-Eldred), holding off the Bucks in a contest full of District 9 and District 10 senior stars, 11-8 at Showers Field in DuBois.

Watch the first pitch thrown out by Keith Miller’s grandchildren, Brock and Ellie Miller, who threw to Keith’s sons, Brian and Chad Miller.

The Eagles, managed by Penn State-DuBois manager Tom Calliari, got things going immediately in the first inning, connecting for five runs and never relinquishing that lead, this after Broc Weigle (A-C Valley) tossed a scoreless top half of the first.

Matt Bailor (Clearfield) drew a bases-loaded walk against Bucks’ starting pitcher Owen Trumbull (Eisenhower) that brought in Shane Uber (Union City). Hunter Titus (Titusville) followed by getting hit by a pitch with the bases loaded and Brandon Perez (North East) delivered the big blow, a 2-run single with an error bringing in a third run on the play and fifth of the inning.

Calliari talked about the game and why he wanted to be a part of it.

The Bucks, managed by Penn State-DuBois assistant Mike Nesbit,  battled back, getting the game within a run at 6-5 after a 4-run fourth inning.

Trey Ayers (Port Allegany) drew a leadoff walk in the fourth and came around to score on Derrik Zappa’s (West Middlesex) RBI single. Trumbull walked and Steven Reed (Union City) had an RBI single, which was immediately followed by Matt Schmader’s (Forest Area) bases-loaded walk. Garrett Starr (DuBois) had a big hit, a 2-run double, with an out made on the base paths to end the inning.

The Eagles got two of those runs back in the fifth, courtesy of Sebastian, who ripped a 2-run double with two outs, scoring Hunter Dixon (Clearfield) and Isaac Criss (Grove City).

That was all the scoring until the eighth inning when the Eagles extended their lead by three to 11-5. Those runs turned out to be very important, as it turned out.

Damon Foster (DCC) led off the inning with a walk, went to second on a wild pitch, third on a passed ball and scored on high school teammate Dante Armanini’s RBI single off of Keenan Heeter (Keystone). Carter Moses (Port Allegany) tacked on the 10th run with an RBI single and Teagan Gray (Eisenhower) drew a bases-loaded walk to put the finishing touches on the frame.

The Bucks staged a rally in the top of the ninth and actually had the tying run up at the plate, but Perez and the Eagles were able to get out of the jam and preserve the victory.

Ben Glasl (Brockway) put down a perfect bunt that brought in a run, and Starr followed with an RBI double to make it 11-7. Mason Jones (Grove City) ripped a liner into center for a sacrifice fly for the first out, making it 11-8.

That was as close as the Bucks got, however, as Perez was able to close it out.

Jones had a star effort in defeat for the Bucks. In two perfect innings on the mound, he struck out five, running his fastball up to 89 MPH. He also walked twice and stole a base to go along with the sac fly.

Foster also had an RBI single in the second inning for the Eagles, while Zach Spellen (DCC) had an RBI double in the third that got the Bucks on the board.

Both teams were able to bat through their 20-man lineups twice, each turning the lineup over for a third time by the game’s end.

The game is named in honor of former Keystone coach and high school sports official Keith Miller, who passed away in 2019. The game was founded by Miller’s family, including his wife, Ruby, and his sons, Chad and Brian.

Chad Miller talked about why he started the game

The All-Star game was the kickoff to a much bigger event in DuBois all weekend long. There will be a youth baseball tournament all day Saturday and Sunday (The baseball tournament will kick off at 9 a.m. at Heindl Field hosting teams from across northwestern Pennsylvania including DuBois Dragons, DuBois Diamondbacks, Clearfield, Clarion Riverhounds, St Marys Drillers, Penns Valley, Franklin Firestorm and the Lake Erie Scouts. On Sunday the championship and consolation games will conclude the tournament.) as well as Ballpark Brawl, a pro wrestling event from Heindl Field on Saturday night starting at 6:30 p.m. Tickets for the Ballpark Brawl will be available at the gate and can also be purchased at https://www.ballparkbrawl.net/

Watch Live: Keith Miller Memorial Invitational High School Baseball All-Star Game Powered by BHL Sportsperson of the Year Award
Four District 9 Umpires Officiate PIAA 2A Baseball Championship Game
This website or its third-party tools process personal data.In case of sale of your personal information, you may opt out by using the link Do not sell my personal information.
×
Manage consent