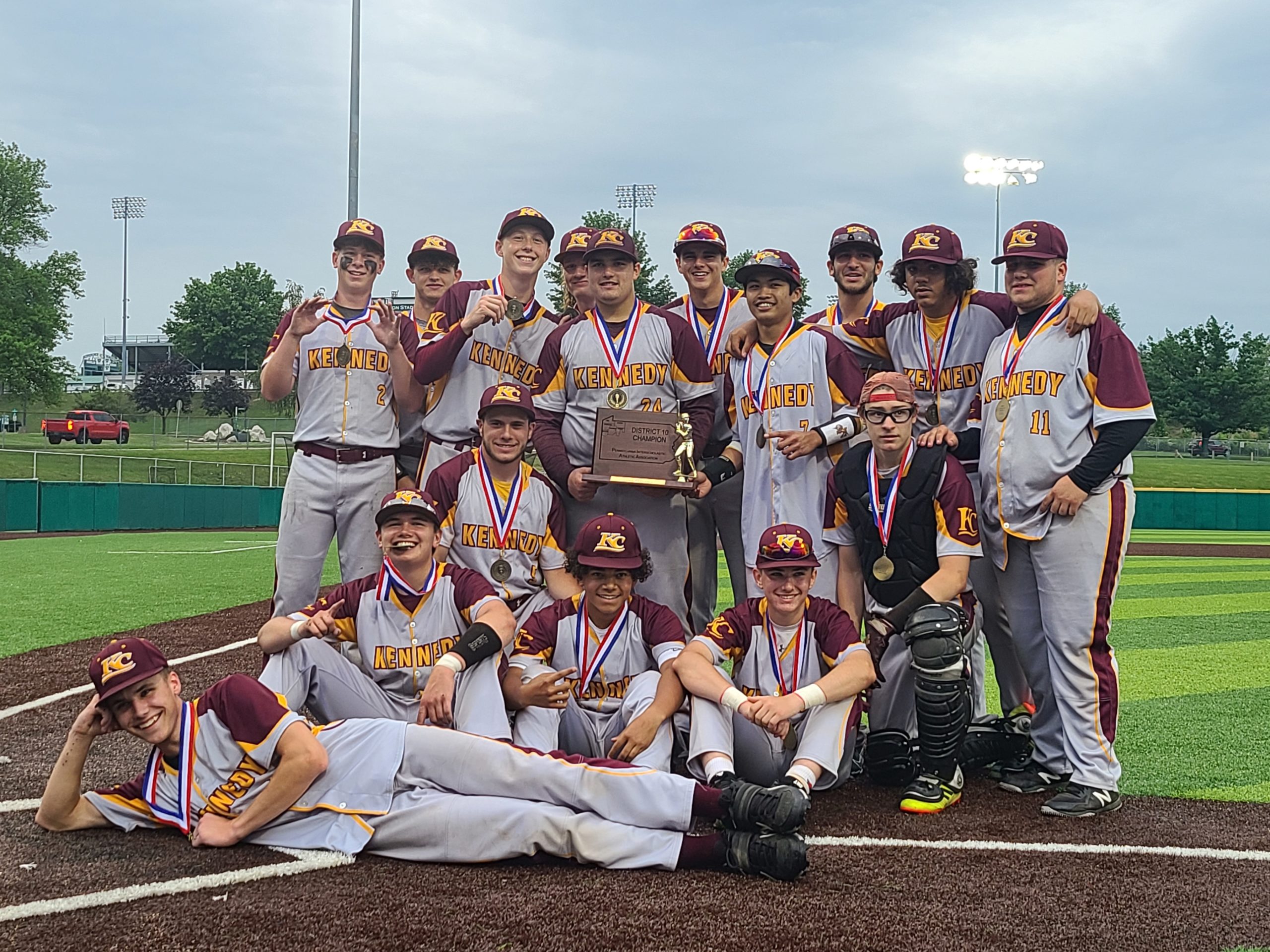 “We came out here and showed everybody that this year was our year to come out and play baseball,” said Kennedy Catholic’s Remi Hart, who had a huge day at the plate.

It was a win that was all about putting Kennedy Catholic baseball back on the map.

And, from a hitting perspective, it was a performance for the ages, as the Golden Eagles (9-10) collected 20 hits, compared to just four for the Orioles.

The middle of the lineup, specifically Nos. 3, 4, and 5 hitters Santino Multari, Cody May, and Hart were outstanding. The trio combined for 10 hits and nine RBIs, including four hits from Multari, four RBIs from Hart, and three hits and three RBIs from May.

“It was a blast,” Multari said. “Coming in we were confident the whole time, so it was definitely a fun time to play. It means so much. It’s been 31 years since D10. We’re putting Kennedy baseball back on the map.”

The Golden Eagles entered the fifth inning with a modest 4-2 lead, but that changed in a hurry against starting pitcher Isaac Clayton and relievers Aaron Burkhardt and Trevor Hamilton.

Three straight hits got the rally started, as Cord Pocza and Multari both got on for May, who brought them both in with a double. That chased Clayton and gave way to Burkhardt, but the Golden Eagles were far from done.

Sean Kirkland plated a run with an RBI single, the Golden Eagles scored another run on a wild pitch and Pocza stepped to the plate for the second time in the inning and was hit by a pitch to force in a run. Hamilton came in and Multari promptly greeted him with a 2-run single, and May put the finishing touches on the inning with an RBI base hit.

A total of 14 batters came to the plate in the inning, which ended with a 12-2 Kennedy Catholic lead.

Rocky Grove made sure there would be no 10-run rule, however, as Burkhardt had an RBI fielder’s choice, Reece Henderson a run-scoring single that, coupled with a wild pitch and a bases-loaded walk to Eli Wilson kept the Orioles in the game at 12-6.

The bottom of the fifth was also the end for Kennedy Catholic starter Nick Ondo, who gave up six runs on just two hits, surrendering six walks and a hit batter in 4 2/3 innings. After a long first inning, he was very effective until the fifth, inducing a lot of weak contact.

The Golden Eagles put up two more runs in the seventh for good measure, as Hart collected his fourth RBI of the game on a double and Stargell Fuhr hit a sacrifice fly.

“It’s amazing,” Hart said. “Everybody had fun. I’m pretty sure everyone had almost two hits if not three. Everybody was hitting the ball and everybody was having fun. It’s great.”

Fuhr came in and settled things down on the mound late for the Golden Eagles. He went two innings and didn’t give up a run.

Davey Cochenour had three hits and a run for the Golden Eagles, while Ondo also had a pair of hits, including a double and Tommy Molvar two hits and an RBI.

Henderson had two of Rocky Grove’s (10-8) four hits and a pair of RBIs. Burkhardt had a pair of RBIs on a sacrifice fly and a fielder’s choice, while Eli Wilson had a hit and an RBI and Caden Toscano walked three times, was hit by a pitch, and scored three runs.

With the win, the Golden Eagles advance to play WPIAL runner-up Riverview in the first round of the PIAA playoffs on Monday.

“We showed everyone that we could make a run for it this year,” Hart said.

Clearfield Beats Somerset to Advance to PIAA 4A Baseball Playoffs; Kane Fails to Qualify in 2A Powered by Washington Rodeo
Some Sites, Times Announced for PIAA Softball/Baseball Playoffs
This website or its third-party tools process personal data.In case of sale of your personal information, you may opt out by using the link Do not sell my personal information.
×
Manage consent