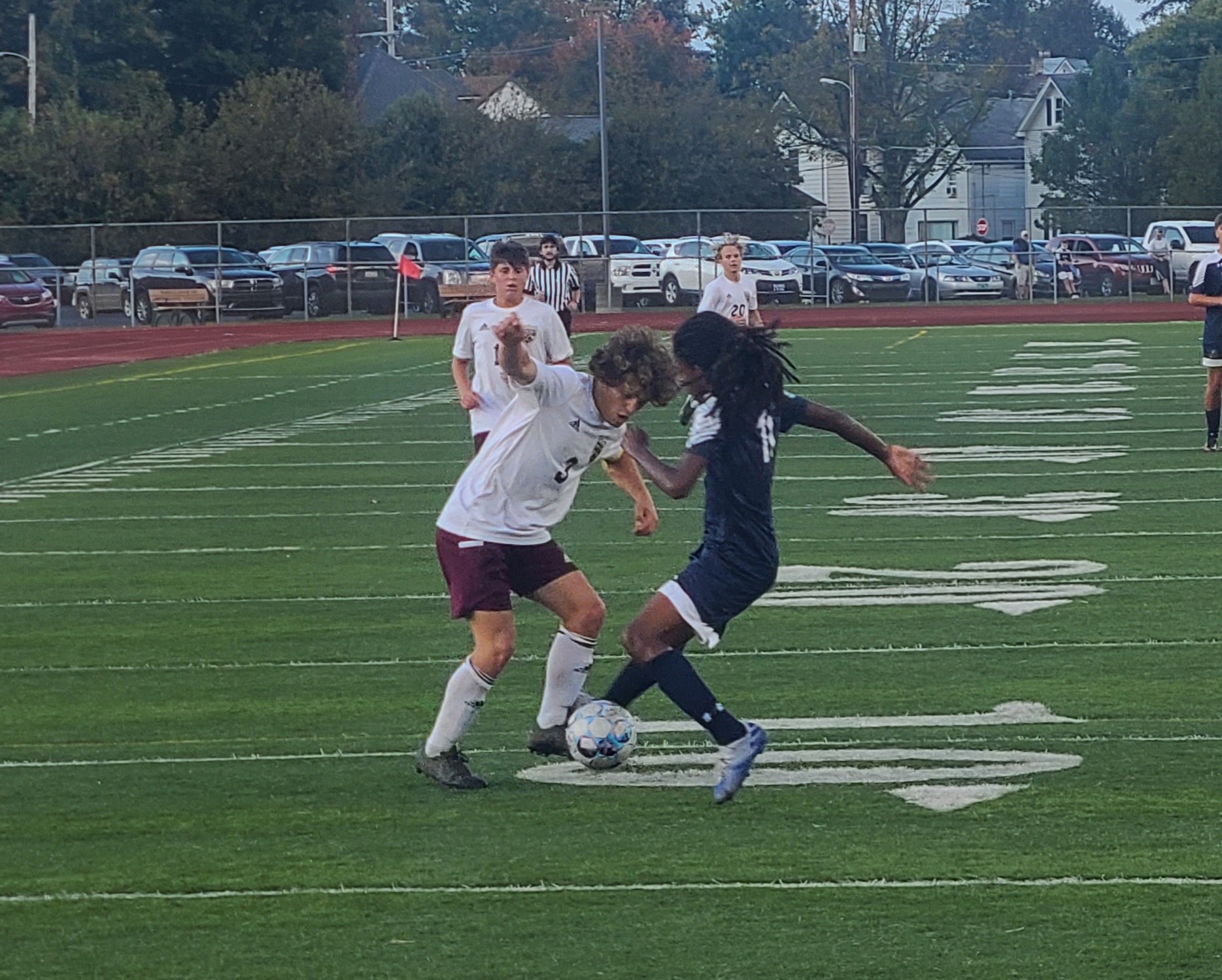 North East's Krew Ksenich (left) and Warrens' Corban Reinard battle for possession during the first half of Tuesday's game.

WARREN, Pa. – For 75-plus minutes, North East and Warren battled to a scoreless stalemate.

With 4:17 to go, the Dragons were called for a foul in the box and North East’s Joel Morey penalty kick was perfect, beating Dragon keeper JT Blum.

The Grapepickers added an insurance goal two minutes later courtesy of Mike McGuigan, with Krew Ksenich tallying the assist to head back home with a big 2-0 Region 4 road win.

Morey talked about the game, including his game-winner afterward:

Out of necessity, Blum made his first appearance in net and was very effective to the tune of seven saves.

The Dragons had several opportunities courtesy of Parks Ordiway and Mark Lynds, but the North East defense was up to the task.

Grant Girts and Ethan Hammer combined on the clean sheet for North East.

The win snapped a 26-game losing streak dating back to a 2-1 victory over North Penn-Liberty on Oct. 8, 2019 and it was Cale Kosa doing the honors for the Panthers, converting on a free kick with 8:30 to go in the second overtime.

Ridgway’s Jack Benninger and Northern Potter’s Wyatt Kibbe each scored three goals, with Benninger’s goal with 20:23 to play in regulation.

The Panthers rallied to tie the game, however, courtesy of Wyatt Bliss, converting off a corner kick from Kosa.

Malachi Lewis was strong in net for the Panthers with 14 saves, while Garrett Lehman made 13 stops for Ridgway.

STRATTANVILLE, Pa. – Clarion-Limestone played a man down for 30 minutes but still managed to pull out a 4-3 win over Redbank Valley.

Cody Whitling scored two goals for the Lions in a game in which teammate Jason Megnin was shown a red card.

Layton Dunn and Wyatt Boyden had C-L’s other goals, while Thomas Uckert and Whitling tallied assists.

River Cramer and Kaleb Green also scored for the Gators.

Ty Guilds had nine stops in net for Port Allegany and Braidyn Rumsey one for Coudy.

Eric Young, Jared Marchiori, Dylan Bash and Noah Adams also scored for the Rovers. Marchiori and Adams had two assists apiece and Swanson and Bennett one each.

Jacob Maze had the clean sheet in net.

TIONESTA, Pa. – Allen Johnston and Ryan Parrett scored three goals each to help Forest Area to a 12-0 win over Keystone.

Sam Kightlinger, Chris Van Doren, Wade Atkins and Cae Espeso also found the back of the net for the Bison

Robbie Umpleby and Joshua Salmon also scored two goals for the Trojans, while Tyler Glasl, Luis Corrales and Edis Alicusic added one each.

Noah Lauria and Luke Trocki had the other goals for the Ramblers.

FAIRVIEW, Pa. – Nathan George scored a pair of goals to help Fairview to a 3-0 win over Mercyhurst Prep.

Zach Scott had the other tally for the Tigers.

CLARION, Pa. – Raegen Beamer and Lilli Barnett both scored in the second half to help Redbank Valley to a 2-0 win over Clarion.

Ember Hetrick and Barnett had assists.

LeighAnn Hetrick had the clean sheet in net.