No. 1 Clarion Dominates No. 2 West Shamokin to Move into PIAA 1A Volleyball Semifinals 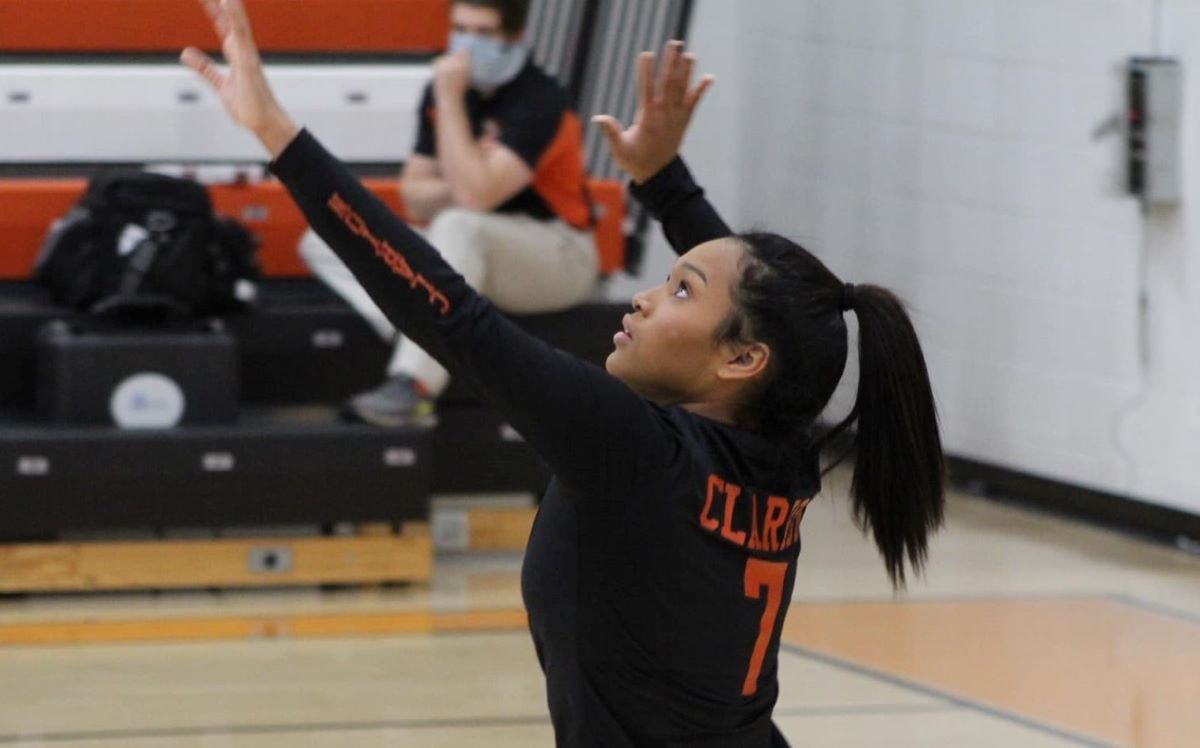 Aryana Girvan had seven kills in the win for Clarion. Here she gets ready to serve during the match Saturday. Photo by Nathan Girvan

“Every step that we make that is forward is a true accomplishment,” Clarion head coach Shari Campbell said. “Every day is a gift. I think that’s a really big lesson for everybody, not just his team. You have to just love what you’re doing, the day that you get to do it. We’re just thankful that we get to do it again.”

Clarion did it with a diversified offense that featured 15 kills from Erica Selfridge, 14 from Korrin Burns, and seven from Aryana Girvan.

“We love to run an offense where we spread the net from antenna to antenna,” Shari Campbell said. “It really makes an opponent’s middles have to work. Then, as we establish that, to come back in and see our middles contribute is really phenomenal.”

Campbell’s daughter, Brenna, is a big reason Clarion is able to go antenna to antenna. The senior setter, who was recently named an AVCA All-Region player as well as the District 9 Class 1A MVP by the Pennsylvania Volleyball Coaches Association, and a first-team all-conference setter, had 30 set assists in the victory.

“It (the diversified attack) is a testament to Brenna being able to do that,” Shari Campbell said. “And to have those hitters who can connect. You have Erica, Korrin, Aryana. That just allows Payton (Simko) to come in a little bit later. I think she is one of the most improved players that we have seen through the playoffs. She’s playing really well.”

Final point of the match

As dominating as the match was for the Lady Cats, they did unquestionably benefit from the absence of one of West Shamokin’s top hitters, Maddie McConnell, and the fact the Lady Wolves top hitter, Lexie Young, was hobbled by an ankle injury she suffered in the Heritage Valley Conference championship game a couple of weeks ago.

“(Young) is a great outside hitter,” Shari Campbell said. “She’s injured. If she was here (100 percent), we would probably be talking about a four- or five-set match. And then I think (McConnell) due to COVID quarantine, she is a formidable outside also. That completely changes the makeup of this match for sure.”

West Shamokin head coach Melinda Osterling wasn’t making any excuses for her team but did acknowledge that being short-handed wasn’t an easy thing to overcome.

“When you lose people last minute, it is tough,” Osterling said. “We tried to overcome it. We didn’t, but we tried. I’m very proud of how the girls fought. They didn’t make excuses. They did their best to try to salvage it and do what they could. I am very proud of them. They showed a lot of character. It wasn’t easy coming out here knowing that your team isn’t where it normally is. That’s hard, especially for kids. But, I was very proud of them. It was a good learning experience.”

Osterling knew even with a full squad it was going to take one of West Shamokin’s best efforts to come out on top let alone shorthanded.

“Clarion is an awesome team, anyway,” Osterling said. “I wish them luck. I hope they bring home the state title.”

After easily winning the first set by 15 points thanks to five kills each from Girvan and Selfridge, Clarion was cruising in the second set, as well, up 19-10.

Erica Selfridge with the volleyball commemorating her 1,000th career kill that she recorded Saturday

But West Shamokin didn’t go down without a fight clawing back to 19-16 thanks to a pair of kills from freshman Lily Jordan and a kill from Young.

Clarion responded with a pair of kills from Selfridge, a block by Burns and Simko, and a kill by Burns to put the set on the brink with a 24-19 lead.

Again the Lady Wolves fought back with a block by Jordan and Abby Osterling and a kill by Kenzie Buzzard before a Burns’ hitting error made it 24-23. But Jordan served long giving the set to Clarion and along with it a commanding 2-0 lead.

“I wasn’t nervous,” Shari Campbell said. “I (was) just kind of demanding that we get out of our own heads and work as a team and connect and talk. I think we had some indecisive moments. As soon as we kind of started working together, started talking, then it was easy to finish that. But they are a great team, so I expected them to play us tough.”

Any hope of gaining momentum from the second-set comeback attempt was dashed when Clarion quickly jumped out to a 10-2 lead in the third set that had more to do with West Shamokin errors than Clarion scoring its own points.

The Lady Wolves struggled in both serve receive and passing throughout the match, a fact Melinda Osterling partially attributed to having players out of position.

“We had people in there passing who don’t normally pass,” Osterling said. “I think other people were trying to overcompensate a little bit. It didn’t work out very well for us. But, their servers, those are the toughest servers we have seen for a while. Both things together, make it kind of tough.”

Jordan paced West Shamokin with four kills and a pair of block assists, while Young and Bailey Conrad each had three kills. But overall, the Wolves managed just 14 kills in the match or less than Selfridge had herself.

Speaking of Selfridge, her 15 kills put her over 1,000 in her career – the majority of it which was spent at Bainbridge-Guilford High School in Bainbridge, N.Y.

“I did know about it, and I am really happy about it,” Selfridge said. “I don’t want to say that I don’t care, but I want to keep playing.”

Selfridge completed a double-double with 10 digs but said the key to her game is just letting it happen.

Clarion will take on WPIAL champion Bishop Canevin, a 3-1 winner over District 10 champion Saegertown, in the PIAA semifinals Tuesday, Nov. 17. That match is believed to be at Bishop Canevin.

“I know in the beginning of the season, we didn’t know what would happen, even if we would have a season,” Selfridge said. “So being able to get this far means so much more. It was questionable that we weren’t (going to get here). I think we are playing really good.”