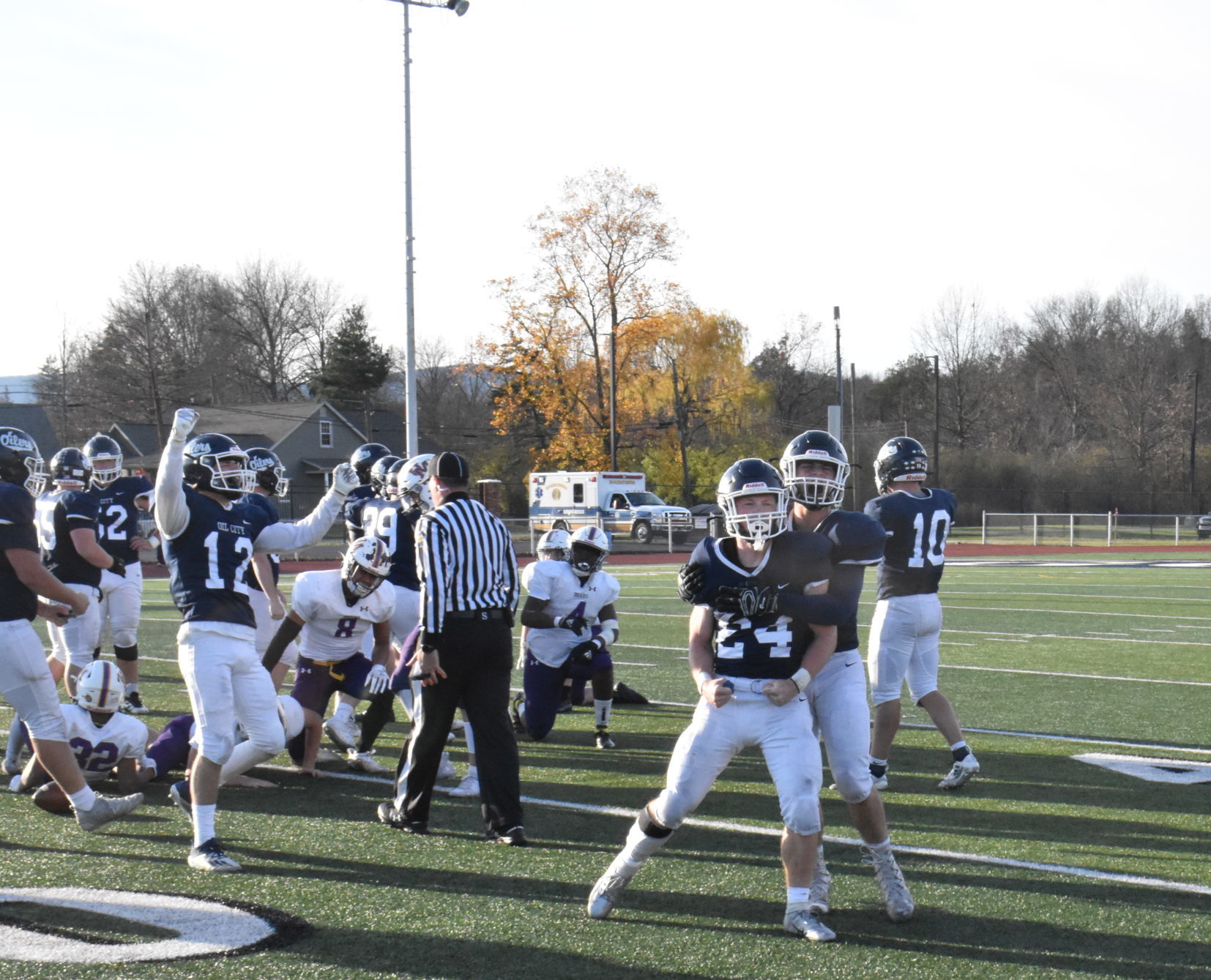 HOLLIDAYSBURG, Pa. – With the outcome of Saturday’s PIAA Class 4A quarterfinal game hanging in the balance, there was no way Oil City wasn’t finishing on its own terms.

Facing a fourth-and-two from their own 43, up 28-27 with two minutes left and Upper Moreland out of timeouts, the Oilers went for it, and Sean Stack ran them straight into the state semifinals, picking up three yards to close it out.

“I asked the kids, I gave it to the kids,” said Oil City coach Dan York. “I asked them do you want to play defense or go for it? They said we wanted to end it now and I said OK, let’s do it.”

The rest, as they say, is history.

It was a fitting end for an Oiler team that has overcome its fair share of adversity, and now has its second 1-point win of the state playoffs.

The lead changed hands three times in the fourth quarter, the last of which came on Holden Stahl’s 5-yard touchdown run with exactly four minutes to go.

It was Stahl’s fourth total touchdown of the game, as he threw a pair to JT Stahlman in the first half and ran for two in the second half.

“You’ve gotta do what you gotta do,” Stahl said simply.

In a way, it’s a fitting mantra for this team that bullied teams through District 10 play and has passed every test with their backs against the wall in the state playoffs.

Cam Jackson’s 40-yard run was the catalyst, and Jackson took it in from six yards out to make it 27-22.

Oil City (10-0) responded, as Stahl and Stahlman connected for a huge 63-yard pitch and catch, setting up Stahl’s go-ahead score.

Dakota Cole’s interception gave the Oilers the ball back, and the Golden Bears took their two remaining timeouts in an attempt to go back on offense.

The Oilers simply weren’t having it, however.

“Sean (Stack) didn’t practice all week and he took a good shot in the first half,” York said. “But he got back up off the ground and just kept going.”

The Oilers methodically moved the ball in the second half, but struck for big plays in the first half.

Stahl and Stahlman were responsible, hooking up on touchdown passes of 29 yards in the first quarter and 58 in the second quarter, that, coupled with a pair of successful two-point conversions, gave OC a 16-14 halftime lead.

“Every week we practice a couple main passing plays we know might work and they worked today,” Stahl said.

Upper Moreland had a connection of its own working in the first half, courtesy of quarterback Byron Hopkins and receiver Jahaire Johnson.

The Golden Bears elected to kick extra points after each score, both of which were successful.

“They have a good team, that quarterback scared me because he’s fast,” York said. “They have a lot of speed on their team.”

The Oilers did intercept Hopkins twice in the first half, courtesy of Stahlman and Stack.

Jackson had 114 yards on the ground for Upper Moreland, while Stack had 87 to lead OC. Stahl finished with 170 yards passing, 150 of which went to Stahlman.

Oil City will meet Thomas Jefferson, a 35-28 overtime winner of Aliquippa in the WPIAL title game, in the semifinals next week at a site and time to be determined.

“Our team has battled so many injuries this year and we just kept fighting through it,” Stahl said. “It was a great team win today.”

Nov. 14, 2020 Playoff Soccer and Volleyball Scores
No. 1 Clarion Dominates No. 2 West Shamokin to Move into PIAA 1A Volleyball Semifinals
We use cookies on our website to give you the most relevant experience by remembering your preferences and repeat visits. By clicking “Accept All”, you consent to the use of ALL the cookies. However, you may visit "Cookie Settings" to provide a controlled consent.
Cookie SettingsAccept All
Manage consent