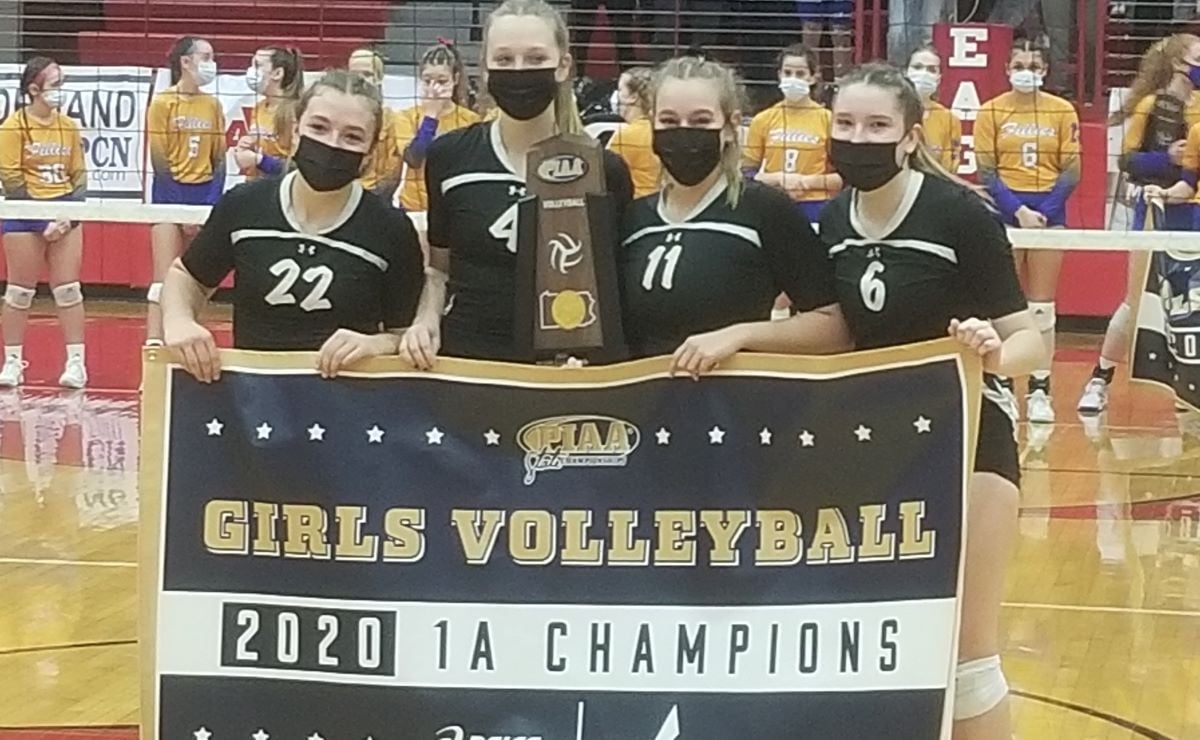 Clarion finished off a perfect season with its ultimate goal, a PIAA Class 1A volleyball title thanks to a 3-0 (25-16, 25-14, 25-15) win over Marian Catholic Saturday morning at Cumberland Valley High School in Mechanicsburg.

“It’s been my dream for so many years,” Clarion senior setter Brenna Campbell, who had 39 set assists (on 44 Lady Cats’ kills), two digs, and a kill, said. “To have this, it’s amazing. It feels so great. It’s is so awesome. It has been my life for 17 years. To finally go out this way is amazing.”

Brenna Campbell won her first state title, but it was the second for her mom, Clarion head coach Shari Campbell, who also took home gold in 2012.

“This means everything,” Shari Campbell said. “It’s just amazing. This whole season has been minute-by-minute, detail-by-detail, managing it making sure that we get here. We have enjoyed every single thing we have accomplished, every ball that we have touched. We have been so full of gratitude for it. But, this is just everything. They have worked for it. It is so special.”

Clarion won the way it has won all season. With a dominating offense, a strong serving game, and a solid defensive effort.

Of the 75 points the Lady Cats scored, 44 (58.7 percent) came off kills with five different players recording at least one kill.

“We challenge,” Shari Campbell said. “Our whole point is to be bold and aggressive. We challenge up high and solve problems up high. We train our setter to be able to deliver up there, just don’t back down. If we can be fundamentally sound and hit into the heart of their court, we can wait for them to make a mistake, too. You can see that when we challenge the blocks and hit hard into it.”

Junior Korrin Burns, after a slow start, led Clarion with 19 kills while hitting .552 She also had seven digs and two aces.

“It is everything,” Burns, who joins mom, Jodi (1984 and 1986 at Norwin) and sister Ellie (2012 at Clarion) as a state volleyball champion, said. “It is everything we hoped for. It is really exciting. We have worked so hard to be here.”

Burns wasn’t alone in leading the offense. Fellow senior Erica Selfridge, in her first season at Clarion after her family moved to Clarion from Bainbridge, N.Y., where she won a pair of state titles as a freshman and senior, added 18 kills while hitting a ridiculous .727 and adding 16 digs and seven aces for perhaps the game of her life.

“Doing it with the team and us being so united, it means so much more to us, at least to me,” Selfridge said.

“We are strong servers, but game serving has been a weakness,” Shari Campbell said. “We have focused on it all through these playoffs. We never relented. Every kid has stood at the line in practice by themselves every day since we started the playoffs. I think you saw that pay off.”

The serving was at its strongest when Clarion needed it the most, in the first set.

The No. 1 ranked team in the state all season, the Lady Cats might have felt the pressure early on falling behind 5-0, 6-1, and 8-2 in the first set.

“Probably all of it,” Brenna Campbell said when asked if nerves played a role in the slow start. “Including me.”

But down 8-2, Selfridge had back-to-back kills to steady the ship on her ay to nine kills in the set.

“I just knew I had to step up,” Selfridge said. “I knew they were all really nervous. (I knew) if I stood up, they would come along eventually, and they did.”

After Selfridge’s kills got Clarion to within four, sophomore Aryana Girvan continued the comeback with back-to-back aces.

“I knew were down by a lot in the first set,” Girvan said. “I realized I had to go back there and serve and do what I know how to do and do my best.”

“She serves 43 miles per hour, and that is too fast,” Campbell said. “So, I always have to dial her back. I give her a short zone. It is somewhere between the short zone and the end line. It has so much float on it. It is super tough to pass. It was a game-changer.”

The Lady Cats tied the first set at 10 on a kill by Burns, who after a slow start got stronger and stronger as the match went on.

“We were a little nervous,” Burns said of the slow start. “It is the state championship game. But there are no excuses for the rough beginning play. I think we felt more comfortable as the play went on, and it just got better.”

Marian Catholic continued to keep the lead or keep the set tied until it was 13-13 following a Selfridge kill for Clarion.

A hitting error by the Fillies Rebecca Dzuranin gave Clarion its first lead of the set, 14-13, and the Lady Cats never relinquished it.

Aces from Best and Selfridge and two kills from Selfridge gave Clarion a 20-15 lead and forced a Marian Catholic timeout.

But the stoppage didn’t stop the Lady Cats’ momentum, as a receiving error following by a kill from Burns and another ace from Selfridge made it 24-15.

A kill from Megan Paisley temporarily stopped the run, but Burns recorded a kill and Payton Simko an ace to seal the first-set win.

In the second set, Clarion found itself trailing 6-4 following back-to-back aces from Alivia Karchner but thins quicking changed with the Lady Cats going on a 9-1 run that featured two kills and an ace from Selfridge, two kills from Burns, and a kill from Simko to take a 13-7 lead.

Marian Catholic was able to get within four, 15-11, on kill by Kelly Sullivan, but two kills apiece from Girvan and Selfridge made it 19-12, and Clarion scored six of the final eight points to put the set away leaving it one set shy of a state title.

The Lady Cats started quickly in the third set jumping ahead 4-1 on a kill and two aces from Burns and a kill from Selfridge.

But the momentum slowly turned towards Marian Catholic, and the Fillies tied things up at eight following a pair of Clarion errors – of Marian Catholic’s 45 points in the match, 25 came off Clarion miscues.

Burns, however, helped Clarion go on a 6-0 run starting the spurt with a pair of kills, and the run, which put the Lady Cats up 14-8, was finished off by an ace from Simko.

The lead quickly became 10-10 thanks to kills by Burns and Girvan and a block by Selfridge and Adia Needham.

One last push by Marian Catholic got the Fillies within six, 20-14, but a service error by Maura Kelly made it 21-14.

Girvan gave the point back with a service error of her own, but Selfridge followed by a kill and an ace, and Burns got a kill to put the Lady Cats on the verge of the state championship, leading 24-15.

Selfridge then served for championship point and a short volley ensued with a serve receive being pushed all the way back to Clarion’s side where senior Ava Kiser passed it to Campbell who gave it to Burns for a tip. But Ashlyn Klitsch dug it for Marian Catholic, which ended up freeballing it over the net.

Jordan Best then dug and passed to Campbell. Simko faked through like she was going to hit it, but the pass went to Burns. And the junior hammered the ball down setting off a wild celebration.

NOTES – Clarion was nearly perfect this year losing one set all season, the first set at Maplewood Sept. 23. The Lady Cats won 57 straight sets to finish the season and went 69-1 in sets this year … Clarion is now 2-2 in PIAA title games winning the last two it has played in 2012 and 2020 after losing in 2010 and 2011 … Marian Catholic falls to 2-5 in PIAA title games and has lost four straight title-match appearances (2014, 2015, 2016, 2017) since winning it all in 2013 … Karchner led the Fillies with nine kills, but as a team, Marian Catholic had just 16 kills mainly because Clarion recorded 44 digs led by the 16 from Selfridge, nine from Girvan, eight from Best, and seven from Bruns.

ALSO SEE A TEAM FOR THE AGES

A Team for the Ages: Clarion Ends One of the Most Dominant Seasons in State History in Style
Grove City Boys Soccer Questioned By District 10; No Girls Basketball at Tidioute Charter This Season
This website or its third-party tools process personal data.In case of sale of your personal information, you may opt out by using the link Do not sell my personal information.
×
Manage consent