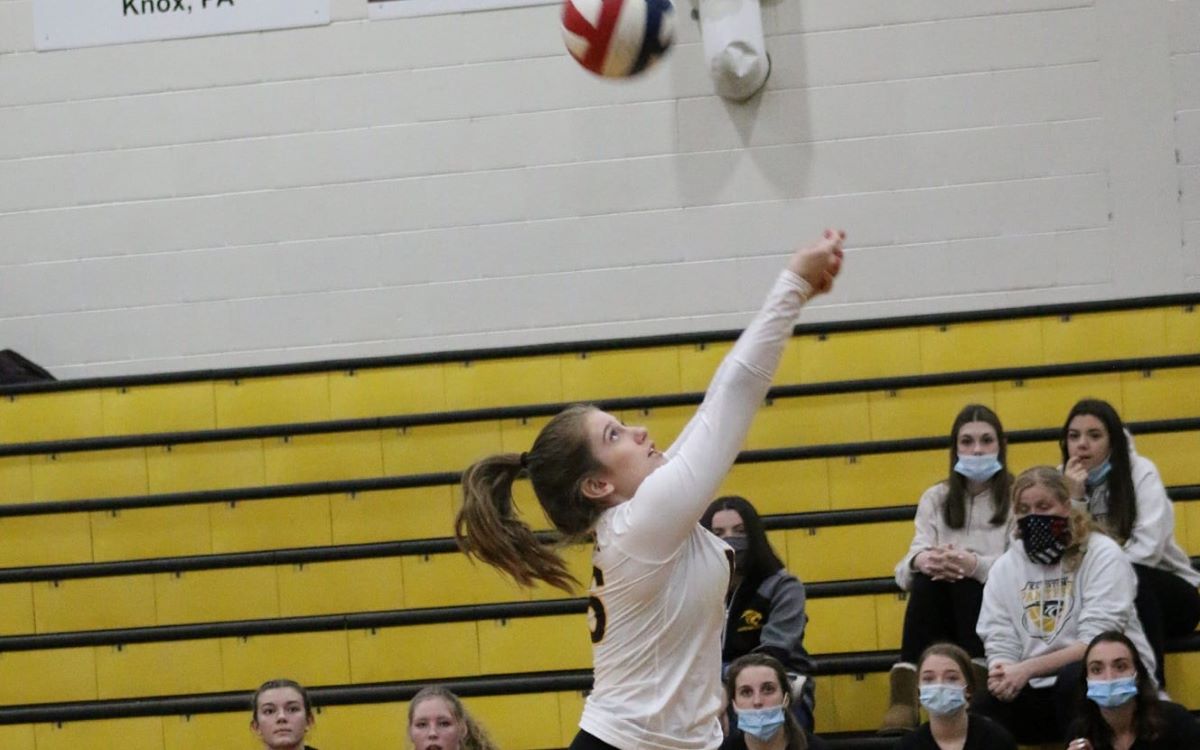 Emma Burrows recorded one of her 18 digs during Keystone's 3-1 win over Punxsutawney in the D9 2A semifinals Monday night. Photo by Jim McConnell

“The girls have worked hard for this,” Keystone head coach Bryan Mong said.

“It (1992) was a long time ago,” Mong said. “It’s all on these girls. With everything that is going on, all the distractions that we’ve had, they focused on one thing. This is probably the most solid team as far as depending on each other and teammates that I’ve seen here under my coaching, at least. I think it is showing when we come together.”

This season has been anything but normal for Keystone. Forget about COVID-19 – every team has had to deal with that in some way or another. The Lady Panthers have had challenges most teams wouldn’t be able to imagine.

Over the last couple of weeks, Keystone lost one of its two setters in a two-setter offense (Alexandria Johnston) to a season-ending injury. Then they had a parent of one of the players pass away, and then, just before beating Moniteau in the District quarterfinals Thursday, Oct. 30, Mong found out his dad had passed away. He coached that game without telling anyone not wanting the focus to be anyone but the players.

And it is still that way. Mong said he hasn’t used the adversity the Lady Panthers have faced in the last couple of weeks as motivation for his team, but he is pretty sure his players have on their own.

“Adversity, when we have it, you count on family,” Mong said. “The girls made the comment in here that we all feel like family. I think I haven’t actually used the adversity, but I think they’ve used it and just felt more tight and coherent together.”

Perhaps it is everything Keystone has gone through this year that allowed it to not be phased by a less-than-stellar first set when Lady Panther errors – seven hitting errors and 14 overall – helped Punxsutawney gain the early momentum with the 25-19 first-set victory.

“When I looked at their faces out there, they just looked tight,” Mong said. “They weren’t playing free.

“Punxsutawney came out with a lot more energy. This is a very momentum game. When we are playing tight, it’s tough.”

In addition to taking advantage of Keystone mistakes, the Lady Chucks also got strong play at the net in the first set with 10 kills led by four from Katelyn Griebel, who had a match-high 15 kills to go with 16 digs, an ace, and a block.

“After we got warmed up, we had some good results.”

Sydney Bell took the lead in the second set for keystone recording four kills on her way to eight in the match.

“Sydney stays after you,” Mong said. “Sometimes, she doesn’t get the attention that Leah (Exley) and Natalie (Bowser) do just because of her lack of height. She’s a shorter right-side (hitter) over there, but she’s got to cover a lot of areas to block. She does a great job with her lateral movement getting out to the block.”

Bell’s hitting teamed with Jozee Weaver’s serving helped Keystone go on an 8-0 run in the second set to erase a 6-5 deficit and give the Lady Panthers a 13-6 lead they never relinquished.

Weaver had four aces during the run and finished the night with five aces, as Keystone recorded 12 on the night.

“I wouldn’t say our serving was as good as it was against Moniteau in the quarterfinals,” Mong said. “But Jozee had a great night serving, and we got a lot of points from her. They were trying to adjust to her, and Jozee was just picking her spots and after it.”

Serving also played a key role in the third set for Keystone, as three straight aces from Bowser finished off a 12-4 run to start the set by the Lady Panthers.

Bowser and Exley also contributed in a big way with the block in the set with the duo combining for three blocks and Bowser adding a fourth solo block as well.

“I told them if we block, we can score points,” Mong said. “They had some height upfront, but this time we matched it. We were aggressive upfront and got a lot of good blocks and touches upfront.”

Between her blocking, her serving, and a pair of kills in the set, Bowser accounted for nine of Keystone’s 25 points in the set.

The fourth set was probably the best of the match with the lead changing hands four times and the set being tied 11 times.

The final tie came at 21-21 following a kill by Punxsutawney’s Elliott Ferrent.

But Exley delivered back-to-back kills to give Keystone a 23-21 lead, and then an error on Punxsutawney made it 24-21.

Another Ferrent kill, she had 10 in the match, got Punxsutawney back within tow, 24-22, but after a lengthy rally, Bowser went cross-court with the match-winning kill.

Ceayra Altman also played a key role in the set for Keystone with a pair of crucial kills – she had four in the set and 11 in the match – when the Lady Panthers trailed 19-18 and then again 20-19.

“She’s my steady senior leader,” Mong said. “I think that kind of showed. She may not be the most powerful hitter or the greatest, quickest mover but she is constantly going. She is constantly a teammate and is constantly picking everybody up and going after it. I just think that attitude brings our team up and together, and they rally around her.”

Punxsutawney also got 18 digs from Madilyn Fye, while Danielle Griebel ran the offense with 26 set assists.

Keystone will take on top-seeded Redbank Valley for the title at 6:30 p.m. Thursday, Nov. 5, at Redbank Valley. District 9 had originally thought of playing the game at a neutral site in St. Marys but later elected to go with the home-site venue of the higher seed.

That puts the Lady Bulldogs (19-1) into Thursday’s D9 Class 2A final against KSAC rival Keystone, which advanced with a four-set win over Punxsutawney. The Lady Bulldogs won the matchup in four sets.

“They’re dangerous for two reasons. One, because they’re a great team and secondly they’re just playing with emotion right now, so we have to match that emotion,” Lady Bulldogs head coach Matt Darr said. “I think that’s the one thing sometimes we struggle with out of the gate. We always pull it off later in the match, but at some point, if we start like that, it’s going to come back to bite us. We have to get to start right off the bat and put it to them.”

Curwensville (10-8) won the opening set with 6-foot-1 junior Alyssa Bakaysa leading the charge at the net. She finished with 11 kills and seven blocks.

But the Lady Bulldogs had a variety of strong net games from Hetrick, Huffman and Pago, who had 16, 14 and eight kills respectively.

D-10 Soccer Semifinals: Hickory Edges Mercyhurst Prep in Penalty Kicks
Three-Peat! Bradford Girls Topple DuBois For Third-Straight D-9 Class 3A Soccer Title
We use cookies on our website to give you the most relevant experience by remembering your preferences and repeat visits. By clicking “Accept All”, you consent to the use of ALL the cookies. However, you may visit "Cookie Settings" to provide a controlled consent.
Cookie SettingsAccept All
Manage consent