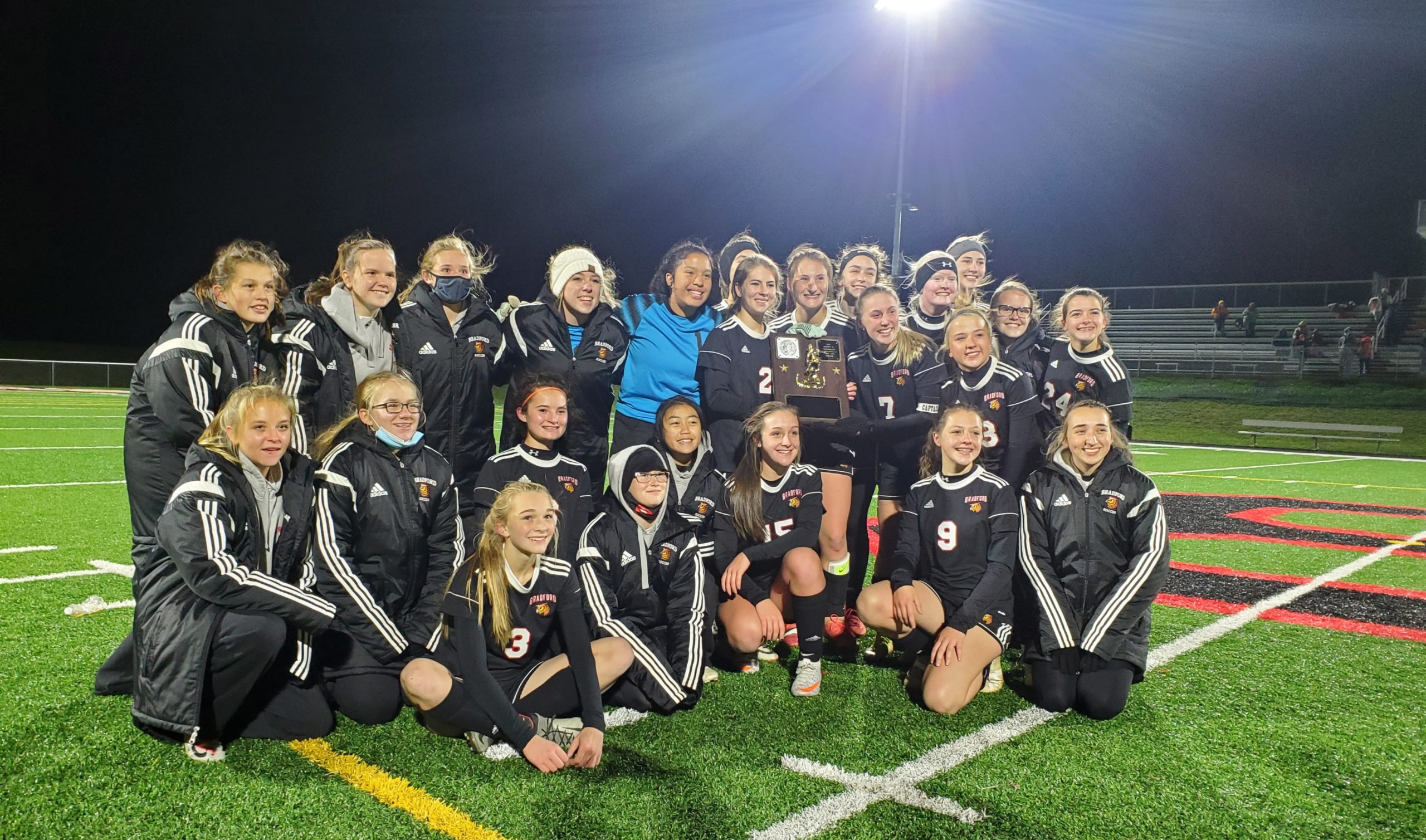 BROCKWAY, Pa. – Three goals for freshman Kelsea Austin and a three-peat for Bradford.

The Lady Owls continued their dominance of District 9 soccer, beating DuBois 5-1 to capture a third-straight D-9 Class 3A title.

“The girls have worked hard all year long,” said Bradford coach Warren Shaw. “They were in it the whole time and wanted to be here. I’ve coached these seniors since they were six years old and it’s such a good group of girls. You can’t say one (championship) is more special than the other. I think it’s awesome we’ve won three in a row. It’s hard to do that. Winning just one is hard.”

The unbeaten Lady Owls (14-0) jumped on DuBois right from the get-go, squelching any thoughts of an upset.

They scored three goals in the first 12 minutes, courtesy of Mackenzie Lucas, Maddie Cowburn and Austin.

In the seventh minute, Lucas took a feed from Chloe Shaw and fired a perfect strike into the back of the net.

Just over a minute later it was Cowburn’s turn. She took a long pass from Abbie Nuzzo, used her speed, and put the ball past DuBois keeper Kara Tilson.

In the 13th minute, Austin took a cross from Marissa Miller and found the back of the net.

It’s a scoring flurry Bradford has been used to all season, but this time it came when it mattered most and against their toughest opponent to date.

“These (DuBois) girls are good. We knew we wanted to press them high, and we pressed them quickly,” Shaw said. “We put the pressure on, and it resulted in goals. Then we knew after a good 20-25 minutes, we couldn’t keep that pressure up all game.

“I think we definitely got tired. You could see we haven’t played full games when the varsity is only getting 30 minutes a game. That’s a tempo you can’t keep. I think they took care of business off the get-go.”

The Lady Owls continued to put on a display of speed and pressure throughout the first half, with DuBois unable to generate much in the way of scoring chances in the first 40 minutes.

That 3-0 lead lasted until mere moments into the second half, 45 seconds to be exact, as Austin connected on her second goal of the game on a pass from Miller.

“When you look at Marissa Miller, Kelsea, Maddi, Bos (Emily Bosworth) and Kenz (Mackenzie Lucas) playing up top for you, that’s a fast group of girls that will get balls,” Shaw said. “That was our game plan; we wanted to start that way. We said come out and put a couple goals on the board, and we did.”

Opportunities came a little more frequently for DuBois in the second half, and Rachel Sickeri converted a deep shot in the 61st minute to make it 4-1.

Other than that, however, keeper Lea Kakolewski and the Bradford defense were suffocating.

Austin put the finishing touches on her evening with 4:47 remaining, completing the hat trick.

“You can’t say enough about someone like Kelsea,” Shaw said of the freshman. “She’s relentless, and it’s not even the goals as much as it is when she’s off the ball. She’s relentless.

“She and Maddi (Cowburn) are both relentless of the ball going to win things. Emily Bosworth is the same way; she’s all over the place. No. 4 (Emily Graeca) was their best player, and Bos was all over her and Chloe (Shaw) was all over her. Kelsea and Maddi in particular do such a good job off the ball. I couldn’t ask for more.”

With the victory, the Lady Owls await the winner of the Warren/Meadville District 10 title game in the PIAA playoffs.