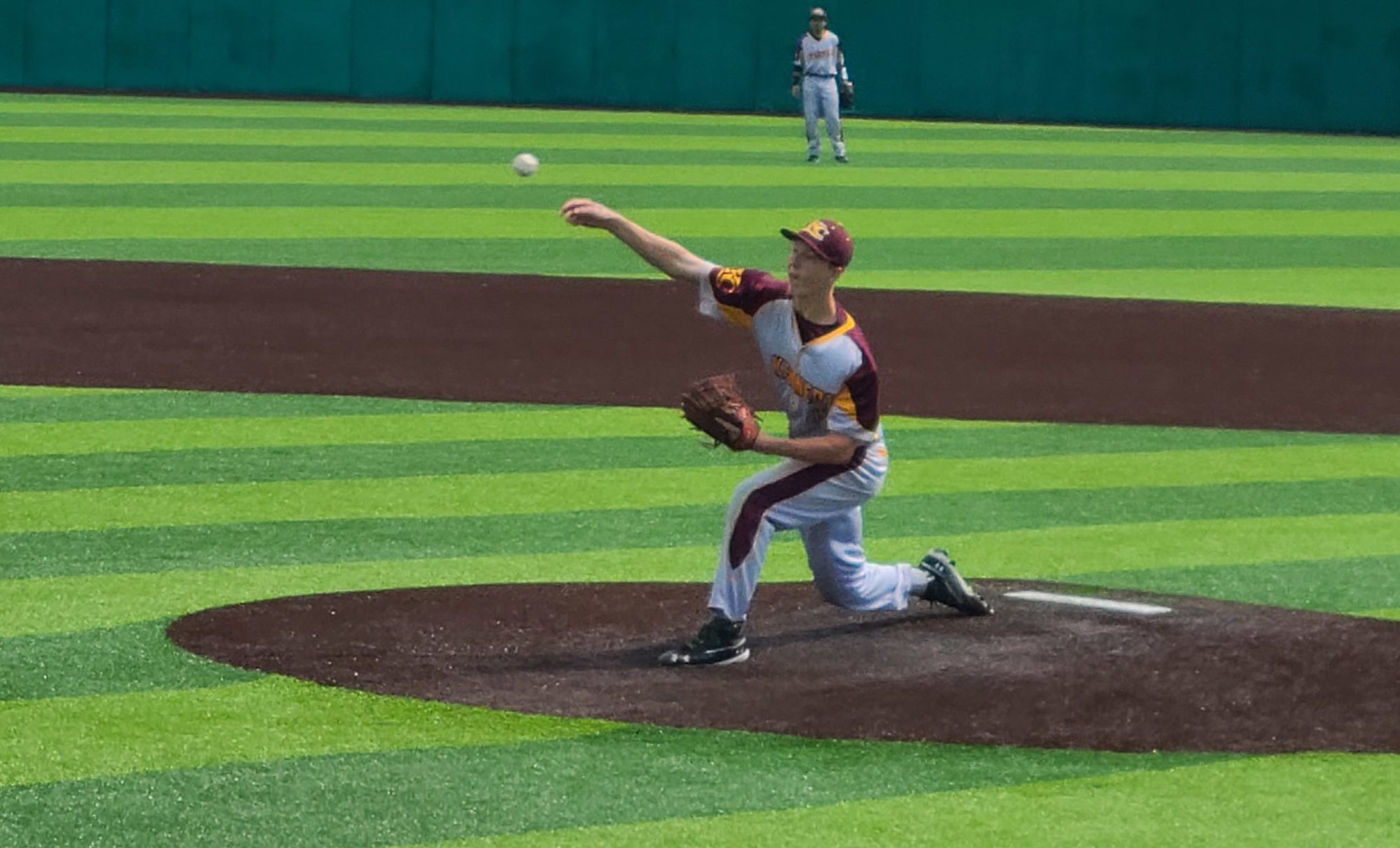 Both of the Rambler runs came in the first inning. With one out Cole Constable drew a walk and moved to second when Luke Costello was hit by a pitch. Jack Malec singled home Constable and a throwing error allowed Costello and Malec to move up an extra 90 feet. Patrick Sullivan notched an RBI groundout to make it 2-0 Cathedral Pre (20-4).

That was all the run support that Engel would need as he gave up just three hits and three walks over six scoreless innings. The Cougars put runners on first and second against Hopkins in the seventh with two outs, but Ryan Jones grounded out to third to close out the contest.

Costello reached base in all three plate appearances adding walk and a single to his first inning hit by pitch.

Talon Mihalinac took the loss on the bump for the Cougars going six innings giving up two runs on three hits, five walks all while striking out seven.

The Ramblers advance to take on Montour (a 6-1 winner over Clearfield) on Thursday at a site and time to be announced.

SLIPPERY ROCK, Pa. – For the second time this postseason, Kennedy Catholic’s Cody May turned in a dominant pitching performance, and his latest masterpiece has the Golden Eagles in the PIAA quarterfinals.

May was masterful in a complete-game, 4-hit effort, as Kennedy beat Riverview 6-1. With the win, the Golden Eagles advance to play Eden Christian (an 8-7 winner over DuBois Central Catholic) in the quarterfinals on Thursday.

May gave up his lone run in the first inning (a Ryan Aber RBI single to score Luke Migley). He struck out nine and walked two. He has now given up just one earned run in 13 postseason innings, after shutting out Cochranton for six frames in the D10 semifinals.

Offensively, the Golden Eagles plated single runs in the first, third, fifth and sixth innings, and tallied a pair in the fourth.

Stargell Fuhr was a catalyst for the KC offense, going 2-for-3 with a double and an RBI. May and Tino Multari had the other RBIs for the Golden Eagles, with Mulatri’s coming on a triple. May and Mulatiri joined Fuhr with two hits. Multari now has six knocks in his past two games and May five.

SLIPPERY ROCK, Pa. – All of Hickory’s runs came in the first two innings as the Hornets advanced to the PIAA quarterfinals with a 4-2 win over McGuffey.

Actually, all of the runs for both teams came in the first two frames, Hickory’s in support of Nick Osborne, was terrific in tossing a 2-hitter.

After an error, McGuffey struck for a pair of runs on Logan Seibert’s 2-run single with two outs.

Trailing 2-0, Hickory responded with a 3-spot of its own. After back-to-back one out singles by Luca Bertolasio and Clay Wiesen, Joey Fazzone ripped a 2-run double to tie the game. Hickory (18-4) wasn’t done, as Fazzone scored on a balk to make it 3-2.

In the second inning, Matt Jordan singled to lead things off, got to second with a stolen base, advanced to third on a passed ball and came home on Bertolasio’s groundout.

That was more than enough for Osborne, who needed just 93 pitches to get through his seven innings of work. Struck out five and walked one. He allowed just the one hit after the first inning.

Wiesen and Osborne both had two hits for the Hornets.

With the win, Hickory moves on to face Central, a 12-8 winner over South Park, in the quarterfinals on Thursday.

ERIE, Pa. — Hempfield scored four times in the sixth to open up the game and held off a late McDowell push to claim a 7-2 victory in the opening round of the PIAA 6A playoffs at Mercyhurst University.

Leading 2-0 in the top of the sixth, Hempfield loaded the bases with one out on a hit by pitch, a Gage Wheaton single and a walk. Michael Hossni forced a run across with another hit by pitch. After a wild pitch scored another run and advanced the runners, Luke Anderson put down a bunt that scored Ryan Firmstone from third. Hossni never stopped rounding third and beat the throw to the plate making it 6-0

The Trojans (14-7) got on the board in the bottom of the frame. Spencer Dietz led off with a single, but was erased on a Chris Juchno fielder’s choice. Jackson Hower worked a walk before Dan Snyder singled home Juchno with both Hower and Snyder moving up a base on the throw. Back-to-back walks forced across a run to trim the lead to 6-2, but a runner picked off first and a strikeout ended the threat.

Brandon Coughlin provided the insurance for Hempfield with a two-out solo home run in the top of the seventh to set the final.

The teams were locked in a pitchers’ duel through four scoreless innings before the Spartans broke through in the top of the fifth. Luke Anderson singled and moved to second on a Jayson Jacob knock. Phil Fox singled home Anderson and a Christian Zilli sacrifice fly scored Jacob and gave the Spartans a 2-0 advantage.

Fox picked up the win on the mound for Hempfield going five scoreless innings allowing three hits with two strikeouts. Jacob paced the offense with three hits and a run scored.

Dietz led the McDowell offense with three hits of his own. Snyder took the loss going 5.1 innings allowing three runs while striking out eight.

Hempfield moves on to play Spring-Ford, a 6-1 winner over Wilson.

NEW CASTLE, Pa. – In a classic pitchers duel, it was Hopewell’s Roman Gill that outlasted Mercyhurst Prep’s Connor Fitzgearld in a 1-0 thriller at Neshannock High School.

The lone run of the game came in the bottom of the fourth on Ty Eberhart’s RBI double.

Fitzgerald, like has has been all season, was terrific for the Lakers (19-5), allowing just one run on five hits. He struck out six and didn’t issue a walk.

Gill was just a little bit better. He allowed just three hits and struck out nine. He did manage to work around six walks as well.

Hayden Zaffino had two of the three hits for the Lakers, while Zach Danias had the other.

The WPIAL champion VIkings will now meet Tyrone, a 6-4 winner over Bedford, in the quarterfinals on Thursday.

SLIPPERY ROCK, Pa. – A dream season for Sharpsville came to an end at the hands of Seton LaSalle on Monday.

Seton LaSalle scored single runs in the first and second innings and that was enough – barely. Both of the runs were unearned. They got their run in the first on a Evan Henke RBI single and a passed ball in the second inning.

Sharpsville (18-2) got its lone run on a wild pitch that scored Zach Ramsey, who was pitnch-running. The Blue Devils had two runners on with no outs in the sixth, but were unable to bring a run across.

Brett Wagner went 6 ⅔ innings to get the win, allowing six hits, striking out five and walking three. Sam Georgiana came on to get the final out and earn the save.

Jackson Doyle went the first two innings before giving way to Brock Lenzi, who tossed five shutout inning for the Blue Devils, allowing four hits and two walks while striking out a pair.

Seton LaSalle moves on to play Serra Catholic, a 13-11 winner over Southern Huntingdon.

Anthony Miller got the win, allowing two earned runs in his 4 ⅔ innings of work. Donny Cade got the offense going with a 3-run home run in the first inning, and New Castle never looked back.

Dom Fornataro and Dante Micaletti each drove in a pair of runs for the Hurricanes.

New Castle moves on to play Eastern York, a 14-1 winner over Bellefonte.

Craig Butler contributed to this report

June 7, 2021 PIAA Playoff Baseball/Softball Scores Powered by BHL Sports Person of the Year Award
Tingley Nearly Perfect for Union City Softball as Lady Bears, Cambridge Springs roll to PIAA Wins Powered by North Washington Rodeo
This website or its third-party tools process personal data.In case of sale of your personal information, you may opt out by using the link Do not sell my personal information.
×
Manage consent