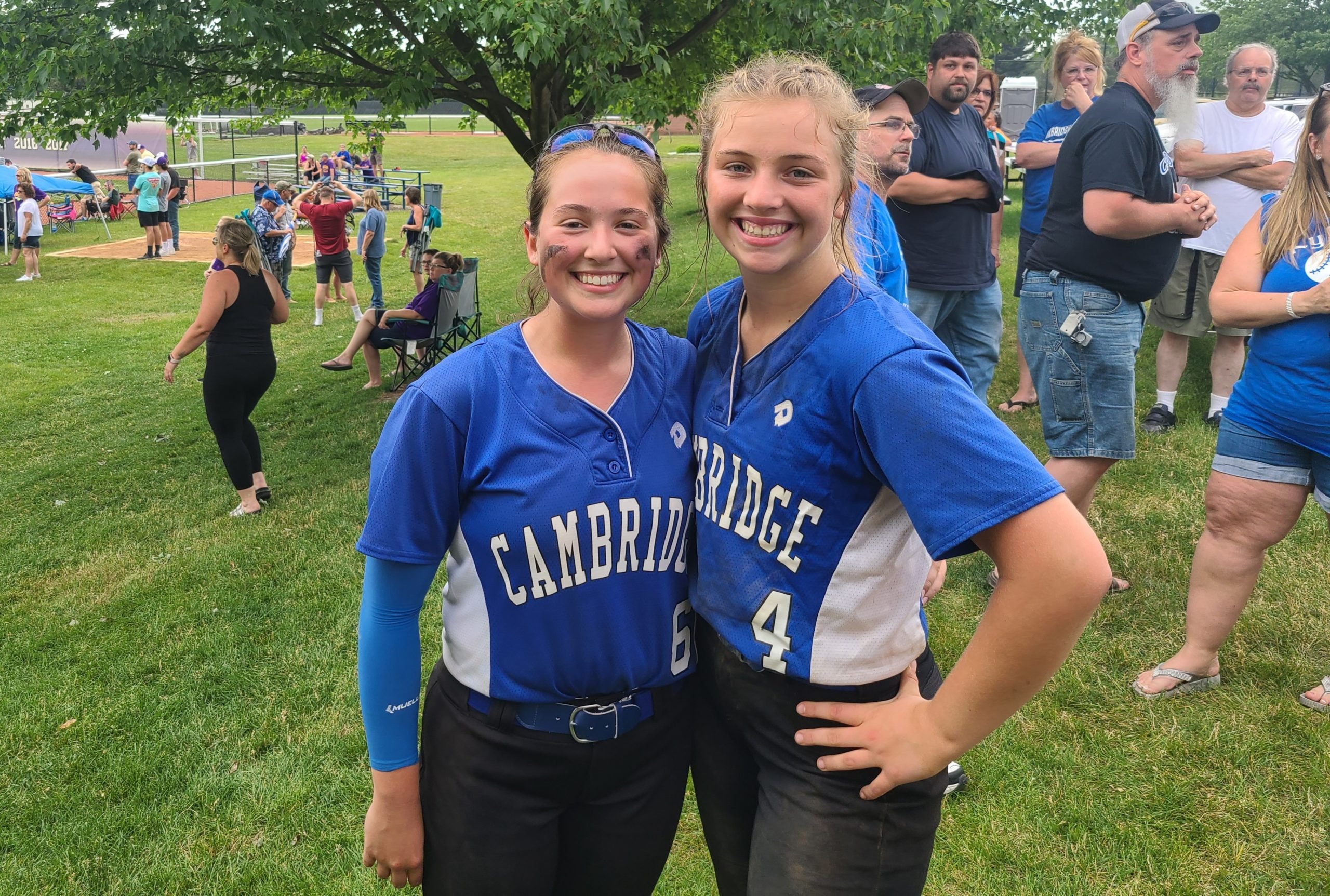 STRATTANVILLE, Pa. – Abby Tingley came one out from a perfect game before settling for a one-hitter, as Union City rolled past Moniteau, 9-0, in the opening round of the PIAA Class 2A softball playoffs Monday afternoon at the Clarion-Limestone Sports Complex.

“Not really,” Tingley said when asked if she knew she had a perfect game going on. “I don’t really focus on it. I am more focused on every batter that’s coming up. Not the entire game. But, it’s awesome.”

The only blemish against Tingley was a five-hooper up the middle with two outs in the seventh by Abby Rottman.

Before then, the Union City ace had let her defense do most of the work with Moniteau grounding into nine of their 21 outs while Tingley struck out three.

“My curve was working pretty well, and so was my screwball,” Tingley said. “We used them a lot”

Union City gave Tingley a 3-0 lead before she ever reache the circle, as Cyaira Zielinski had a two-run single and Lucy Higley followed with an RBI triple in the top of the first after Courtney Stewart of Moniteau had walked two of the first three batters she faced.

“Yeah,” Tingley said when asked if having the lead early helped her relax. “It definitely helps to have my teammates out there battling for me.”

The Bears then added three runs in the fifth thanks to some sloppy Moniteau defense.

Emylee Zielinski led off the inning by reaching on an error, and after Cathryn Reynolds walked, two more errors – on the same play helped a pair of runs score and then a fielder’s choice brought in a third run to make it 6-0.

Union City continued to add on in the sixth with three more runs thanks to an RBI single by Cathryn Reyndols, a double by her sister, Eliza Reynolds, and a single by Sydney Gilbert that made it 9-0.

The win was the second straight for the Bears (23-1) after a 1-0 loss to Sharpsville in the District 10 title game, which broke a 21-game win streak to start the season.

“When we lost, that just gave us more motivation,” Tingley said. “We were so ready. We know what we can accomplish. We are just super excited for everything that takes place.”

What takes place next is a matchup with WPIAL champion Laurel, a 6-0 winner over Frazier, in the PIAA quarterfinals Thursday, June 10, at a site and time to be announced.

“It’s amazing,” Tingley said. “I love my team. I couldn’t have done it without them. Getting this far is just crazy to think about already. I am super excited about what we can accomplish.”

ERIE, Pa. – An extra-base hit parade in the fourth and fifth inning was the recipe for Cambridge Springs to pull away from Clarion-Limestone in their PIAA Class 1A first-round softball game Monday at Penn State Behrend.

The Blue Devils (17-2) had five of them over the course of the 2-inning surge that saw a 1-1 game become a 7-1 advantage in what was ultimately a 9-5 win, sending the Blue Devils into Thursday’s quarterfinal round, where they will meet West Greene.

Taylor Smith had one of those, an RBI triple in the fifth inning, and for good measure, she did the same exact thing in the sixth.

“We were just really content and hit the ball when we needed to hit the ball,” Smith said.

After a tough first inning, Clarion-Limestone (9-8) starter Cassidy Makray had calmed things down in the circle before the Blue Devils’ bats went to work in the middle innings.

What appeared to be a critical juncture of the game actually came in the top of the third with Cambridge Springs leading 1-0 on a Chloe Schultz RBI groundout in the first With two outs in the third. Abby Himes singled and came around to score on Kendall Dunn’s RBI triple. Dunn sprinted home, slid home to try and avoid the tag by catcher Kenzie Lewis and was originally called safe. After a brief conference, the umpires reversed course and called Dunn out at the plate to end the inning and keep the game tied at 1-1.

The bottom of the fourth got going with two outs, as Myranda Findlay reached on an error. That proved to be very costly, as Kenzie Lewis and Maddie Dragosavac came up and belted back-to-back RBI doubles. Dragosavac ultimately came around to score on an error to make it 4-1.

The fifth inning was much the same, except this time, the rally started with one out. Chloe Schultz doubled, Smith hit the first of her two RBI triples and Hailee Rodgers hit an RBI double. Rodgers was also responsible for the ninth Blue Devil run, an RBI single in the sixth.

“We knew we had to win every inning,” Rodgers said. “We knew going into this that every inning was going to count and we couldn’t stop until the final out was called.

Yes, the Blue Devils did take advantage of six Clarion-Limestone errors, but they also came up with the big hits when they needed to.

“The dugout is always super loud when everybody’s hitting,” Rodgers said. “It’s so much fun. We love every single person.”

Other than Dunn’s big hit, Rodgers was strong in the circle, keeping the potent C-L offense at bay.

The Lady Lions showed no quit, however, scoring four runs in the seventh, all with two outs. Regan Husted had a 2-run single and Alyssa Wiant an RBI double before Rodgers got a strikeout to end the game.

“I felt pretty good,” Rodgers said. “Coach (Angie) Mumford, Kenzie (Lewis) and I always talk about how we’re going to attack each game. This game was a little harder because we’ve never played them. So we didn’t know exactly what to expect. But I thought we did really well.”

Only one of Rodgers’ five runs was earned. She struck out five, allowed 10 hits and walked three.

Makray took the loss, allowing seven runs (three earned) in her 4 ⅔ innings on six hits. She struck out two and walked one. Husted pitched the final 1 ⅓ innings of relief.

Smith and Rodgers both went 2-for-4 with a pair of RBIs each, while Schultz was 1-of-4 with two runs and an RBI as well for the Blue Devils.

Dunn, Himes, Husted and Knapp all had two hits for CL, with Husted driving in a pair.

Kailey Johntson’s 2-run single in the third inning got Ligonier Valley going, and they added what proved to be an all-important third run in the top of the fourth on Madison Griffin’s fielder’s choice RBI.

Sharpsville (14-7) scored single runs in both the fourth (Raegen Knicely RBI single) and sixth innings, with a Paige Yarian RBI groundout getting them within one in the sixth.

Griffith, who got the complete-game victory, retired the side in order in the seventh. Griffith allowed just three hits and struck out nine.

Breanna Hanley was the tough-luck loser for the District 10 champion Blue Devils, allowing five hits and three unearned runs. She struck out 11 and walked one.

Erika Grandy had two doubles for Sharpsville and scored a run, two of the three hits for the Blue Devils, with the other coming from Knicely.

Ligonier Valley moves on to play Chestnut Ridge in the quarterfinals.

ERIE, Pa. – Avonworth scored six runs in the second inning which proved to be more than enough in ousting District 10 champ Jamestown from the PIAA playoffs.

The 8-0 defeat didn’t put a damper on what was a historic season for the Muskies, however.

“They were just better than us today,” said Jamestown coach Rodney Callahan. “Still a great experience. Got to make it here and see what it was all about. Still District 10 champs. For these kids, it’s been a heck of a good season.”

Abby Stanley had the big blow in the second inning, a 3-run home run.

It was a tough day for Jamestown (16-7) starting pitcher Dani Ficeti, who was lifted in the second inning after 1 ⅓ innings. She gave way to Savannah Thurber, who pitched 5 ⅔ innings, allowing just two runs.

Up next for Avonworth is WPIAL champion Mt. Pleasant in the quarterfinals.

Larcinese struck out six and walked one, allowing Rilee Hanna’s single in the second inning.

Offensively, Larcinese went 4-for-4 with seven RBIs, including a grand slam in the fifth inning.

June 7, 2021 D10 PIAA BB: Cathedral Prep, Kennedy Catholic, Hickory Get Dominant Pitching to Advance Powered by North Washington Rodeo
June 7, 2021 PIAA SB: Punxsutawney Ties Game in 7th, Wins in 10th; DCC Offense Leads the Way; Clearfield Falls Powered by North Washington Rodeo
We use cookies on our website to give you the most relevant experience by remembering your preferences and repeat visits. By clicking “Accept All”, you consent to the use of ALL the cookies. However, you may visit "Cookie Settings" to provide a controlled consent.
Cookie SettingsAccept All
Manage consent