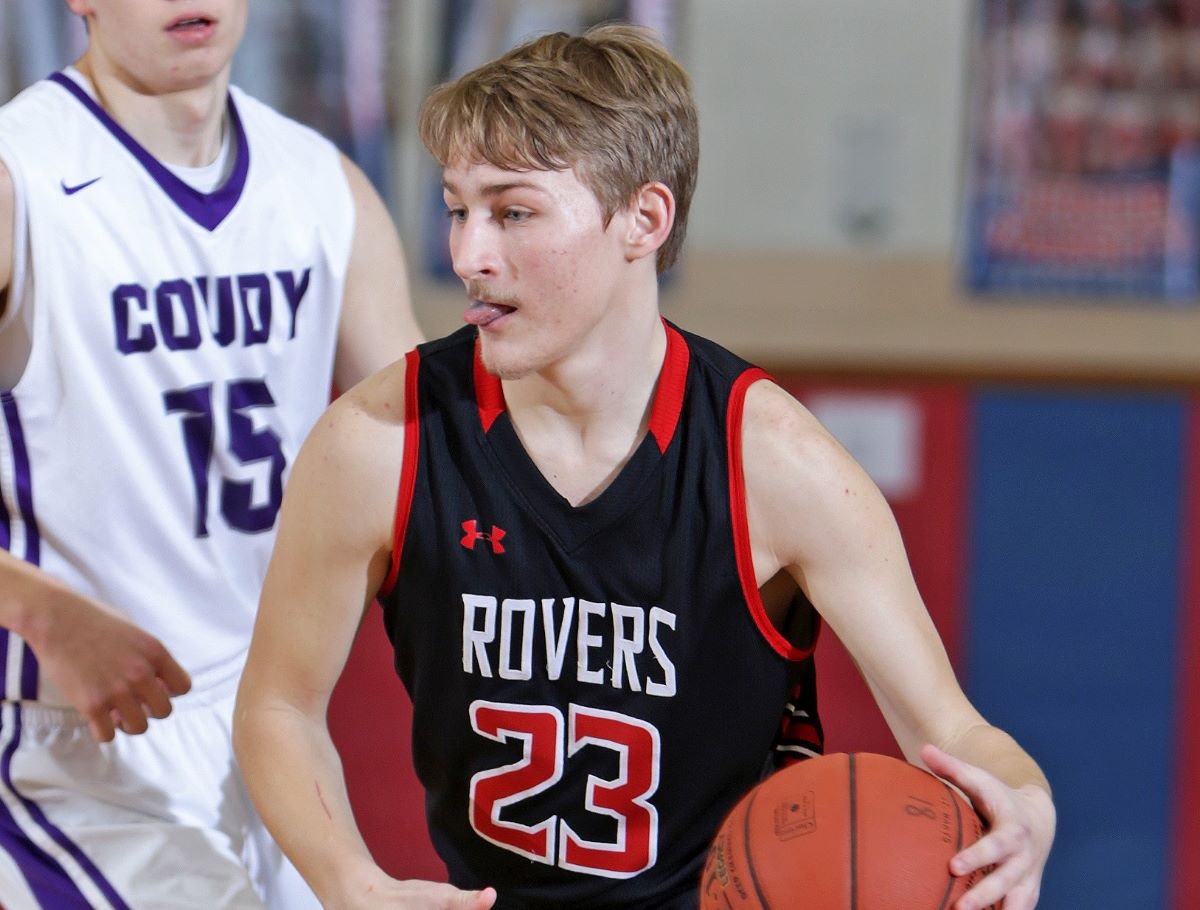 BROCKWAY, Pa. – Noah Adams capped a frantic final 25 seconds with a runner in the lane with about eight seconds to play to lift Brockway to a 52-51 win over visiting Bradford.

The Owls had one last chance, but Cam Austin’s shot after he gathered a loose ball was a bit short.

Bradford grabbed a 51-50 lead when Isaiah Finton drilled 3-pointer with 25 seconds to play before Adams was able to split the defense on an inbound play and go the length of the floor to put Brockway back in front.

Jerid Wilmoth then had the ball knocked out of his hands inside the 3-point arch where Austin gathered it. He stepped back and got a clean but contested look off that would have won the game.

Adams led a trio of Rovers in double digits with 16 points with Dylen Coder adding 13 and Alex Carlson 11.

Austin had a monster game for Bradford with 26 points but was the only Owls player with more than six.

The game-winning sequence capped a solid night for Thomas who scored 11 points, including five in the fourth quarter, while grabbing six rebounds and coming away with a steal.

Landon Francis led the Terrors with 14 points with Gavin Jimerson chipping in nine.

Manning Splain didn’t score for O-E but did dish out four assists, come up with four rebounds, and get two steals.

The Terrors limited Hayden Brown to just 10 points for Cameron County. Brown had scored 211 points in his last seven games (30.1 ppg), including a District 9-record 60 points Monday at Galeton.

Josh Beer also had 10 tallies for the Red Raiders.

Punxsutawney led 34-28 going to the fourth quarter but scored just two fourth-quarter points yet still held a 36-34 lead before Foradora saved the Beavers.

It was Foradora’s five 3-pointer of the night giving him a game-high 15 points.

ECC trailed 27-26 going to the fourth quarter before Breindel hit a 3-pointer and made 4 of 6 free throws to help secure the win.

Breindel and Luke Jansen, who had the other two fourth-quarter points for the Crusaders, led ECC with 10 points each. Adam Straub added eight and Jordan Wasko seven.

BROOKVILLE, Pa. – Withstanding a hot night from the 3-point line by visiting St. Marys, Brookville held on to keep its perfect record intact with a 52-48 win.

St. Marys drilled 10 threes on 17 attempts as Quin Gavazzi hit five and Zack Thorwart drilled four to lead the Dutch’s upset bid that fell just short. Gavazzi missed a 3-pointer that would’ve tied it with 32.2 seconds remaining with the score at 47-44.

St. Marys got it to within 50-48 on Thorwart’s final three with 4.9 seconds left but ran out of time as Lauer sank two more freebies with just 0.3 seconds on the clock to set the final.

Lauer, one of 10 Raiders who scored, was the lone double-figure scorer with 10 points. Noah Peterson finished with eight points, Ian Pete seven, and Garner McMaster and Jack Pete each with six.

The Raiders shot it well from three with less frequency, 6-for-13, as McMaster and Lauer and each hit two. While just scoring one point, Cook finished with seven rebounds and four blocked shots, blocking a rebounded the carom on a Dutch shot that could’ve tied it at 46-46 with 1:32 remaining.

Gavazzi and Thorwart scored 15 and 12 points respectively for the Dutch.

Glendale led 27-24 after 24 minutes of play, but Terry hit a pair of fourth-quarter 3-pointers and scored seven points in the quarter to help rally the troops.

Terry had been held in check prior to the final eight minutes but finished with nine points to lead Curwensville, while Chandler English added eight and Parker Wood and McGarry six each.

Mason Peterson had a game-high 18 points for Glendale while hitting four 3-pointers while Landon McGarvey hit three triples on his way to nine points. Logan Cree chipped in seven points.

RIDGWAY, Pa. – Up by two going to the fourth quarter, Ridgway pulled away to beat visiting DuBois Central Catholic, 38-30, in AML South action.

The Elkers led 26-24 after the third quarter.

AUSTIN, Pa. – Behind 21 points and 11 rebounds from Jacob Hooftallen, Austin picked up a 43-34 home NTL victory over Galeton.

SENECA, Pa. – Venango Catholic made the short trip over the Christian Life Academy in Seneca and beat the hosts, 54-39, behind 34 combined points from Jake Liederbach and Logan Rakow.

Landen DeHaas led the Eagles with a team-high 24 points with Ross Gampe adding 11 and Corlyn Rhoades and Keegan Gwinn 10 each.

Cole Miller had a game-high 28 points while hitting five 3-pointer for Clearfield, which has lost three in a row, four of five, and six of nine since starting 6-0.

Ryan Gearhart chipped in 13 points for the Bison.

Jan. 28, 2022 D9 Girls Hoops: Jacob’s Steal/Layup Lifts DCC Past Ridgway; Redbank Pulls Away from Clarion; KC Upsets Union
Seven District 9/10 Teams Advance at PIAA Competitive Spirit Championships
We use cookies on our website to give you the most relevant experience by remembering your preferences and repeat visits. By clicking “Accept All”, you consent to the use of ALL the cookies. However, you may visit "Cookie Settings" to provide a controlled consent.
Cookie SettingsAccept All
Manage consent