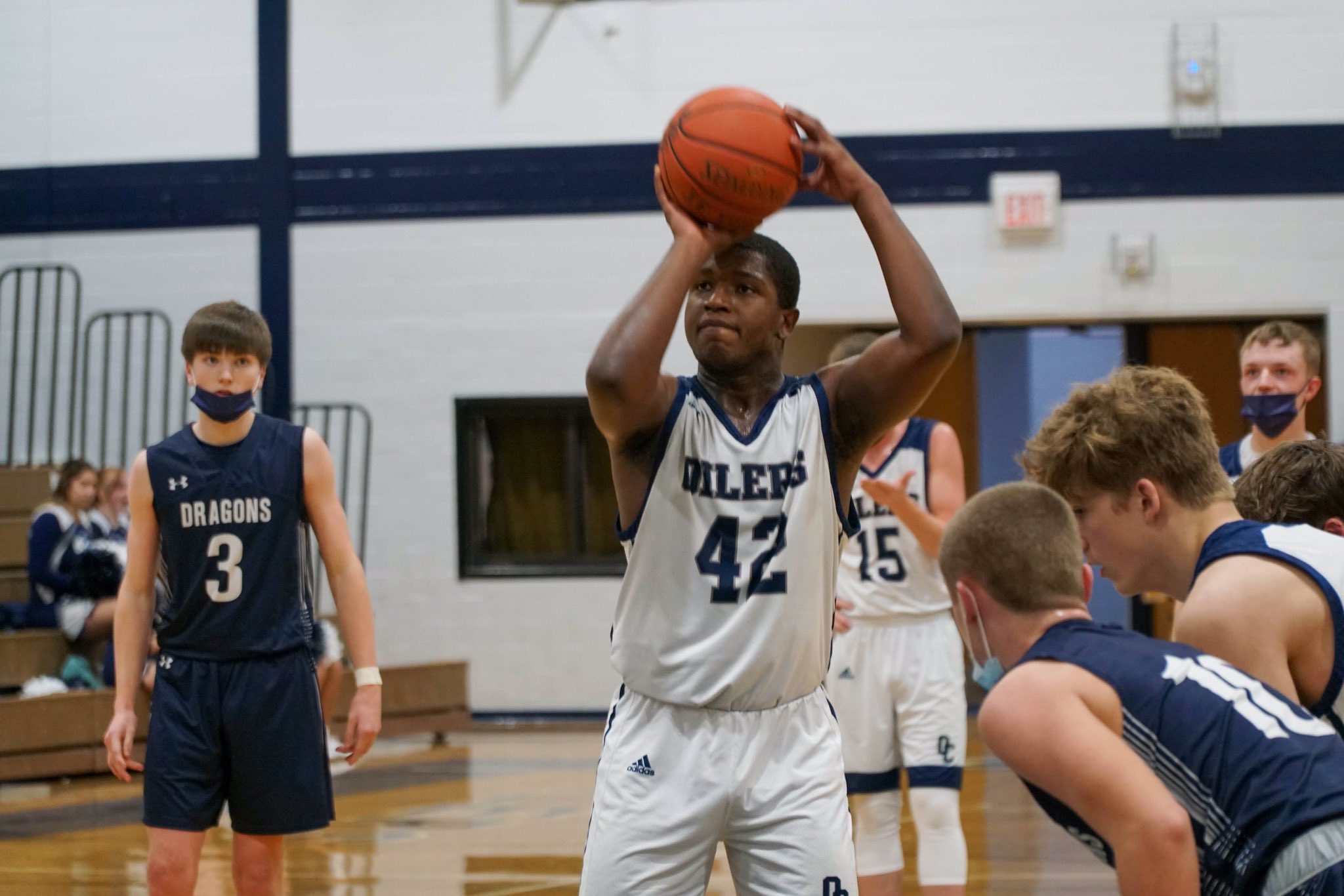 OIL CITY, Pa. – Oil City knocked Fairview from the ranks of the unbeaten on Friday, earning a hard-fought 35-30 Region 5 win over the Tigers.

Fairview came into the game at 12-0 and was the last unbeaten boys’ team in District 10.

Oil City’s Connor Highfield hit a 3-pointer to put the Oilers up 29-28 in the fourth quarter, a lead they didn’t relinquish.

The Oilers were able to force a late Tiger turnover and Highfield, Judias Johnson, and Sayyid Donald hit free throws down the stretch to seal the deal for OC, which was coming off an overtime loss to Warren.

Cole DeSimone drilled three triples in the third-quarter surge and finished with 16 points. Matt Bennett scored a team-high 18 points for UC, including six in the third.

Wyatt Post, Kyler Shaffer and Bryce Drayer all had eight points for the Bears.

Chase Miller scored 18 points for Cochranton, including 8-of-10 from the free-throw line, while Dawson Carroll added 14 points and Landon Homa nine.

SAEGERTOWN, Pa. – Leading by one at halftime, Saegertown outscored Eisenhower 43-13 in the second half in a big 71-42 Region 2 road win.

Brady Greco led the way for Saegertown, draining four threes on his way to a game-high 26 points.

LINESVILLE, Pa. – Parks Ordiway scored a game-high 17 points as Warren powered to a 57-39 win over Conneaut.

Ordiway scored 10 of his 17 points, one of three Dragons in double figures. Warren outscored Conneaut 25-13 in the second half.

Owen Becker got off to a hot start for Warren, scoring eight of his 14 points in the first quarter, while J.T. Blum also had 14 points.

SHARPSVILLE, Pa. – Damon Curry led four Franklin players in double figures with 21 points, including 11 in the third quarter of a 72-38 Region 4 win over Conneaut.

The Knights outscored the Blue Devils 34-15 in the second half.

FARRELL, Pa. – Omar Stewart hit the go-ahead bucket with 20 seconds to go and Lamont Samuels sealed it at the free-throw line in Farrell’s 48-44 win over Rocky Grove.

Stewart and Wilson both finished with 19 points in the win.

Isaac Clayton had a big game for Rocky Grove, pouring in a game-high 20 points, while Quinn Ritchey added eight.

The Ramblers led 22-13 at halftime en route to the win.

The Trojans pulled away in the fourth quarter, outscoring the Greyhounds 21-7.

Tuff McConahy had 14 points and Collin Hill 11 for Wilmington.

Rylan Smith added 15 points for the Beavers, who jumped out to a 14-point first-quarter lead.

The Sailors had the ball with a chance to win late, but Cameron Pence’s shot was just off the mark.

Dom Pugh and Daemyn Mattocks had seven points each for the Mustangs.

Lane Smith had 15 points and Gavin Grantham 14 for the Sailors.

EDINBORO, Pa. – General McLane nearly rallied from a 10-point deficit going into the fourth quarter, but Erie held them off for a 58-55 Region 6 victory.

Andreas McCullum poured in 22 points for Erie, one of three Royals in double figures. Layveon Gore netted 15 points for the Royals and Kre Thompson 10.

John Sabo led the way for the Rockets with 15 points, while Shane Thompson netted 13.

The Rockets jumped out to a 15-2 lead after the first quarter en route to the win.

Mister Ham and Garrett Hoffman had six points each for Sharon.

HERMITAGE, Pa. – It was another strong offensive game for Kennedy Catholic, as they rolled to an 87-34 win over Reynolds.

Elijah Harden led the way with 26 points, while Gio Magesto had 20, Remington Hart 13 and Malik Lampkins-Rudolph 12.

Cam Keyser added a double-double for the Muskies in the win with 17 points and 15 rebounds. Jamestown went on a 16-5 run in the second quarter to take a seven-point lead into halftime.

HERMITAGE, Pa. – Joey Fazzone scored 14 points for Hickory, but it was Grand River Academy that came away with a 61-38 victory.

The Bobcats outscored the Wildcats 36-21 in the second half on their way to the win.

Bobby Yost and Jacob Young were also in double figures for Seneca with 13 and 12 points, respectively.

Eric Steinle had 14 points and Ryan Tewell 10 for Northwestern.

The Golden Eagles scored 52 points in the first half en route to the win.

Jan. 21, 2022 D9 Boys Hoops: Cameron County Holds off Kane in Double OT; Karns City Squeaks by ACV
Simko, Clarion Beat Rival C-L in Double Overtime Thriller
We use cookies on our website to give you the most relevant experience by remembering your preferences and repeat visits. By clicking “Accept All”, you consent to the use of ALL the cookies. However, you may visit "Cookie Settings" to provide a controlled consent.
Cookie SettingsAccept All
Manage consent