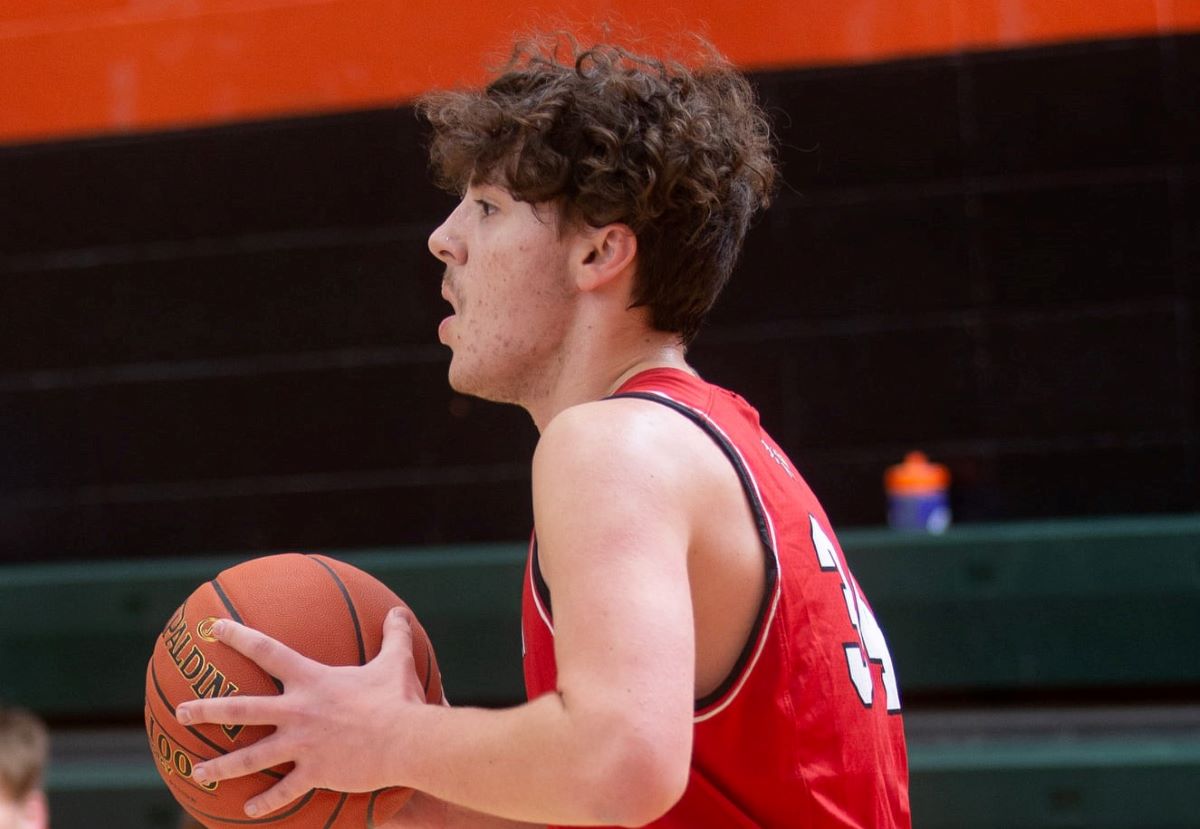 The Red Raiders trailed 41-39 in the second overtime after a runner by Sam Lundeen for Kane.

But Cameron County and Brown were the beneficiaries of some good luck at the other end, as Lundeen blocked an Alan Erickson shot right into the hands of Brown, who scored and was fouled.

The Wolves had a couple of chances with under 10 seconds to play but first lost the ball out of bounds under the hoop with 5.5 seconds left.

They got the ball back following a pair of Brown free throws, but Cameron County fouled Lundeen with 2.4 to play. He missed the first shot, and when he tried to miss the second on purpose he missed everything giving the ball back to the Red Raiders.

Kane led by three, 37-34, with under 30 seconds to play in the first overtime and was trying to run out the clock when Brown stole a Josh Greville pass into the corner with 22 seconds left.

Brown was then fouled bringing the foul across the timeline and hit the first free throw to make it 37-35.

The second charity shot was no good, but Camdyn Allison made a great rebound getting the ball in midair and calling timeout with 13.7 seconds to play.

Allison was then fouled inside by Andy Jekielek when he rebounded a Brown miss with 3.6 left and hit both free throws to tie the game at 37.

Greville almost won the game at the horn, but his foul-line jumper, which went in, came just after the horn sounded setting up the second overtime.

Kane had to rally from a 34-29 deficit late in regulation to extend the game.

A Landon Darr 3-pointer with just over a minute left got the Wolves to within three, 34-32.

After Brevin Lewis and Brown both missed free throws for Cameron County, Jekielek tied the game with a 7-foot shot in the lane with 1.4 seconds to play to send the game to overtime.

Brown had a monster game for Cameron County with a career-high 32 points, while Allison added eight.

Jekielek scored 12 to lead Kane before fouling out with Lundeen adding seven.

Justin Mishic chipped in seven rebounds, three assists, and three points for the Wolves, while Greville had three points, all in the overtimes, and six rebounds.

Enhanced details for this game came from watching the Kane High School Vimeo stream of the contest.

Rewatch the game via Kane’s Vimeo

KARNS CITY, Pa. – Still playing without the injured Luke Cramer, its leading scorer, Karns City held off a fourth-quarter comeback attempt from A-C Valley to pick up a 36-33 win at home.

The Gremlins led 25-9 at halftime and 31-22 at the end of the third quarter before the Falcons made a fourth-quarter charge behind the play of Jay Clover, who scored eight of his 15 points in the final eight minutes.

Clover finished off a double-double with 10 rebounds.

Taite Beighley led Karns City with 16 points, while Micah Rupp added six. Hobie Bartoe had a key 3-pointer in the fourth quarter, his only points of the game, for the Gremlins as well.

Cramer, the leading scorer for Karns City at 14.3 ppg, has an ankle injury and hasn’t played since Jan. 14 vs. Clarion. The Gremlins haven’t had a full complement of players on the court at the same time since beating Moniteau Jan. 7, as Beighley missed two games, including the Clarion game in which Cramer got hurt.

HYDE, Pa. – Cole Miller hit a pair of fourth-quarter 3-pointers and scored eight points in the quarter to help Clearfield pull away from Hollidaysburg, 62-54, for a home Mountain League victory.

Miller hit five 3-pointers in the game while scoring a game-high 28 points for the Bison, who led by four, 44-40, going to the fourth quarter. He finished off a double-double with 10 rebounds.

Isakk Way also had a double-double for the Bison with 12 points and 12 rebounds, while Ryan Gearhart chipped in eight points.

Cole Walters hit four 3-pointers on his way to a team-best 12 points for Hollidaysburg, while Jake Hymen and Mason Goodman each scored 10 with eight of Goodman’s coming in the fourth quarter.

Cole Henery added nine points for the Panthers with Zander McHenry chipping in with eight.

Alex Ognen, fresh off a 40-point performance in a win over Coudersport Thursday, picked off where he left off netting 13 first-quarter points on his way to a game-high 22 for the Hubbers, while Alex Cole chipped in 10 points.

Gardlock led the way with 17 points while Marshall scored 14 points, all 31 of those coming in the first three quarters. Clouse finished with 11 points. Bryson Bain added nine points.

The Bulldogs led 32-14 at halftime, the outscored the Wolves 23-5 in the third quarter to take a 36-point lead into the fourth quarter.

BROOKVILLE, Pa. – Jumping out to a 15-0 lead after one quarter and spreading the wealth in the scoring column, Brookville rolled to a 60-21 win at home over Brockway.

The Raiders led 36-7 at halftime and set the PIAA Mercy Rule running clock into motion with a 41-9 lead at the 5:54 mark of the third quarter.

Dylen Coder scored eight of his team-high 10 points in the fourth quarter to lead the Rovers.

JOHNSONBURG, Pa. – Thanks to 16 points from Kole Asti, Johnsonburg picked up a 53-36 home win over Port Allegany.

Isaiah Jackson added 13 points for the Rams with Luke Zimmerman chipping in with nine, all on 3-pointers.

Neese scored 10 points and grabbed 12 rebounds in the win for the Chucks.

Gabe Kengersky led Punxsutawney with 13 points while dishing out five assists, and Noah Weaver had 12 points and three assists.

CURWENSVILLE, Pa. – Devin Delo exploded for 26 points to lead Mount Union to a 66-40 win at Curwensville in ICC North action.

The Golden Tide were without Parker Wood in the game.

ECC’s Straub Secures 900th Boys Win – For Real This Time – in Double OT Thriller Against Ridgway
Jan. 21, 2022 D10 Hoops: Oil City Boys Knock Fairview From Ranks of the Unbeaten; Union City, Saegertown Among Region 2 Winners
We use cookies on our website to give you the most relevant experience by remembering your preferences and repeat visits. By clicking “Accept All”, you consent to the use of ALL the cookies. However, you may visit "Cookie Settings" to provide a controlled consent.
Cookie SettingsAccept All
Manage consent