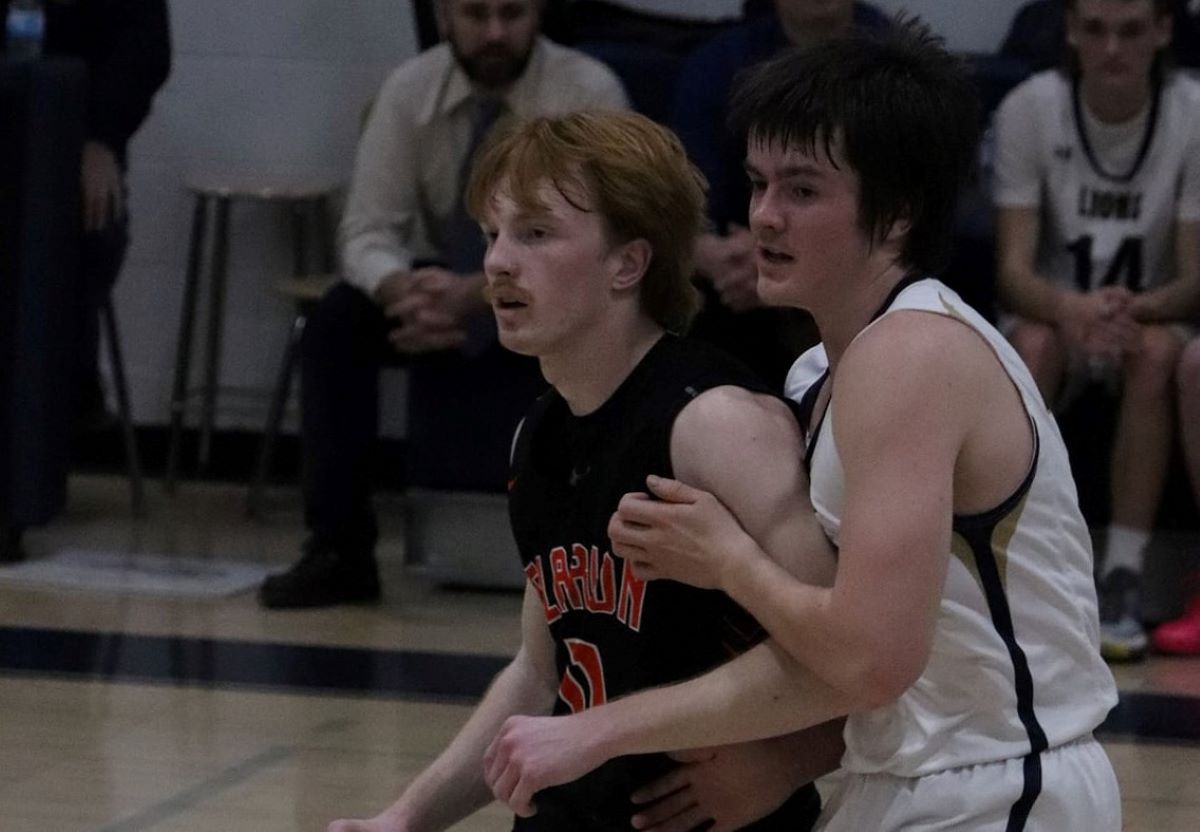 Clarion's Christian Simko is guarded by C-L's Bryson Huwar in the first half of the Bobcats double OT win Friday. Simko had a game-high 25 points for Clarion with Huwar scoring 12 for C-L. Photo by Diane Lutz

STRATTANVILLE, Pa. – Clarion outscored Clarion-Limestone 9-0 in the second overtime to pick up a 65-56 win over its rival Friday night at C-L.

After Christian Simko gave the Bobcats the lead for good, 58-56, with two free throws halfway through the second extra session, Devon Lauer hit a dagger three from the left elbow with 1:26 to go to make it a five-point game.

Two more Simko free throws and a fast-break basket by Dawson Smail put the capper on the win.

C-L’s Rylie Klingensmith takes a shot during the second half Friday. Photo by Diane Lutz

Both teams had a chance in the final 10 seconds of the first overtime to win the game.

After C-L, which was playing without point guard Jordan Hesdon (sprained ankle) had scored the first four points of the first overtime, Clarion responded with the next four including tying the game on two Simko free throws with 1:29 to play. Simko had grabbed an offensive rebound off a Smail miss.

With the game tied, Clarion sat back in a 2-3 zone and let C-L wind the clock down under 10 seconds. That’s when the Lions took a timeout with 9.4 seconds to play.

Out of a second timeout, this one by Clarion, Tommy Smith threw a nice pass to Ryan Hummell cutting towards the basket.

Hummell looked open for a moment, but three Clarion defenders swarmed to him forcing Hummell to pivot away from the basket.

His intended pass ended up as a backcourt violation with 2.7 seconds to play.

Out of another timeout, Clarion got the ball to Gabe Simko. But his shot was short. His older brother, Christian, grabbed the rebound and attempted a putback, but it too wouldn’t go sending the game to a second overtime.

C-L, which trailed 50-44 midway through the fourth quarter, led 52-51 when Bryson Huwar scored off a Hummell pass with 1:47 to go in regulation.

The Lions still led by that score when Jase Ferguson was fouled with 16.4 seconds left.

Ferguson, though, missed the front end of a one-and-one, and Christian Simko wrestled the rebound lose and went coast-to-coast where he was fouled by Huwar with 10.5 seconds to play.

Simko hit the first shot to tie the game at 52 but missed the second.

On the rebound, Smail appeared to get the offensive rebound but Hummell was ruled to have tied the ball up with 6.9 to play.

That gave the Lions two chances to win the game in regulation.

First, Smith missed a 3-pointer. Hummell, though, grabbed the rebound but was wide with his putback.

Christian Simko led all players with 25 points and was named the Allegheny Grille of Foxburg Player of the Game.

He talked about the victory

Lauer added 13 points for the Bobcats while hitting four 3-pointers, Gave Simko chipped in 11 points and Aidan Quinn had eight.

Jan. 21, 2022 D10 Hoops: Oil City Boys Knock Fairview From Ranks of the Unbeaten; Union City, Saegertown Among Region 2 Winners
Jan. 22, 2022 District 9 and District 10 Basketball Schedules Powered by Hunter’s Station Golf Club
We use cookies on our website to give you the most relevant experience by remembering your preferences and repeat visits. By clicking “Accept All”, you consent to the use of ALL the cookies. However, you may visit "Cookie Settings" to provide a controlled consent.
Cookie SettingsAccept All
Manage consent