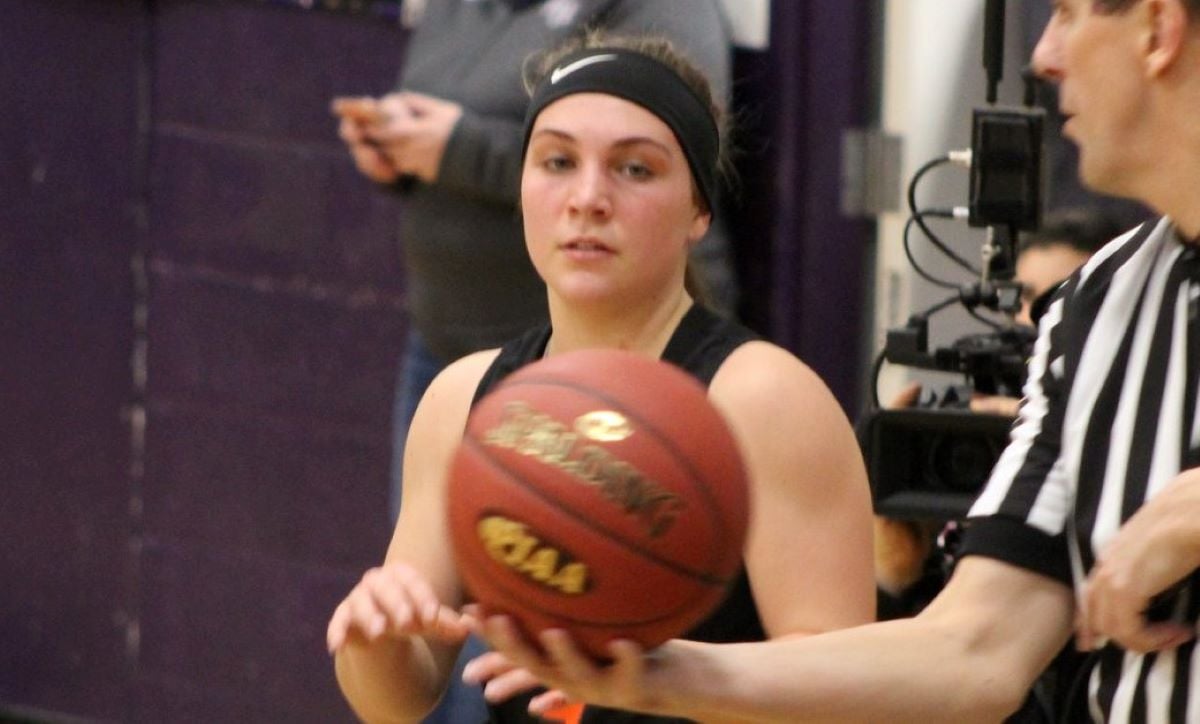 The Lady Cats trailed 34-31 following five straight points from Alex Leadbetter around the seven-minute mark of the fourth quarter – a 3-pointer and then a layup off a Frances Milliron steal.

But a Jordan Best runner from the right corner with 5:03 to play got Clarion back within one, and a Simko jumper at the 4:44 mark put the Lady Cats in front, 35-34.

After Rebeka Ketner made it 36-35 with a free throw, Kendall Dunn tied the game at 36 when she rebounded a missed free throw by Leadbetter and scored with 1:47 left.

That led to Simko’s go-ahead shot and following a miss by Lexi Coull on the other end with 37 seconds to go, Best hit two free throws to make it a 40-36 lead with 29.6 seconds to play.

Leadbetter then missed a 3-pointer, and Alston sealed the win with a pair of charity shots with 12.6 to go.

The fourth-quarter comeback capped a rally from a slow start for Clarion.

The Lady Cats didn’t score a point until there were just over 36 seconds left in the first quarter and trailed 11-2 with under three minutes to play in the first half.

Noel Anthony then gave Clarion its first lead of the game, 15-14, early in the second half before the teams ended the third quarter tied at 29.

Best led Clarion with 16 points and was named the Allegheny Grille of Foxburg Player of the Game. She talked about the win.

Dunn had a double-double for C-L with 19 points and 13 rebounds.

Clarion, though, effectively used a box-and-1 on Milliron to hold the Lady Lions’ leading scorer (14.8 ppg coming in) to a season-low four points, the first time she failed to reach double figures this year and the first time since being held to eight by Keystone Feb. 23, 2021, ending a 15-game streak of double-digit performances.

The She-Wolves mucked up the game going slow and led 24-18 going to the fourth quarter.

But Redbank Valley turned to Madison Foringer inside to avoid the loss.

Foringer scored nine of her team-high 13 points in the final eight minutes including an old-fashion three that gave Redbank Valley the lead – North Clarion took it back one last time at 28-27 – and then started the game-ending sequence with a basket that put the Lady Bulldogs in the lead for good.

Gwen Siegel scored a game-high 18 points for North Clarion, including all 12 of the She-Wolves’ third-quarter points.

North Clarion outscored Redbank Valley 12-6 in the third quarter to take the 24-18 lead after the teams were tied at 12 at halftime.

Both players hit a basket and a free throw in the final eight minutes after the teams went to the fourth quarter tied at 18.

Jenna Kasmierski had a game-high 13 points to go with nine rebounds, two assists, and a blocked shot for Ridgway.

JOHNSONBURG, Pa. – Missing two of its top-five scorers, DuBois Central Catholic got a career game from Rose Whipple and a double-double from Faith Jacob to beat homestanding Johnsonburg, 46-32.

Whipple had a career-high 12 points – she entered the game with 11 tallies on the season – to go with eight rebounds and seven assists, while Jacob had a game-high 19 points to go with 10 rebounds.

FOXBURG, Pa. – One of nine players to score for Karns City, Emma Johns had a game-high 11 points to help the Lady Gremlins roll to a 55-15 road win over A-C Valley.

Rossi McMillen and Emma Dailey each added eight points for the Lady Gremlins.

RIMERBSURG, Pa. – Leading 41-2 at halftime, Union cruised to a 53-13 win over visiting Cranberry.

RURAL VALLEY, Pa. – Falling behind by 11 at halftime, Moniteau’s second-half rally came up short in a 45-41 loss at West Shamokin.

The Lady Warriors trailed 27-16 at the break and 34-22 going to the fourth quarter before making it a game thanks to six fourth-quarter points from Catherine Kelly and five from Abbey Jewart.

Lily Jordan had a game-high 15 points for West Shamokin with Lexie Young adding 11.

The Tigers led 26-8 at the end of eight minutes.

Jan. 20, 2022 D10 Hoops: Villa Tops Warren in Region 6 Showdown; Fairview Girls Keep Perfect Record Intact
Jan. 20, 2022 D9 Boys’ Recaps: Ognen Drops 40 as Smethport Tops Coudersport; Cameron Co. Goes Double OT to Beat St. Marys
We use cookies on our website to give you the most relevant experience by remembering your preferences and repeat visits. By clicking “Accept All”, you consent to the use of ALL the cookies. However, you may visit "Cookie Settings" to provide a controlled consent.
Cookie SettingsAccept All
Manage consent