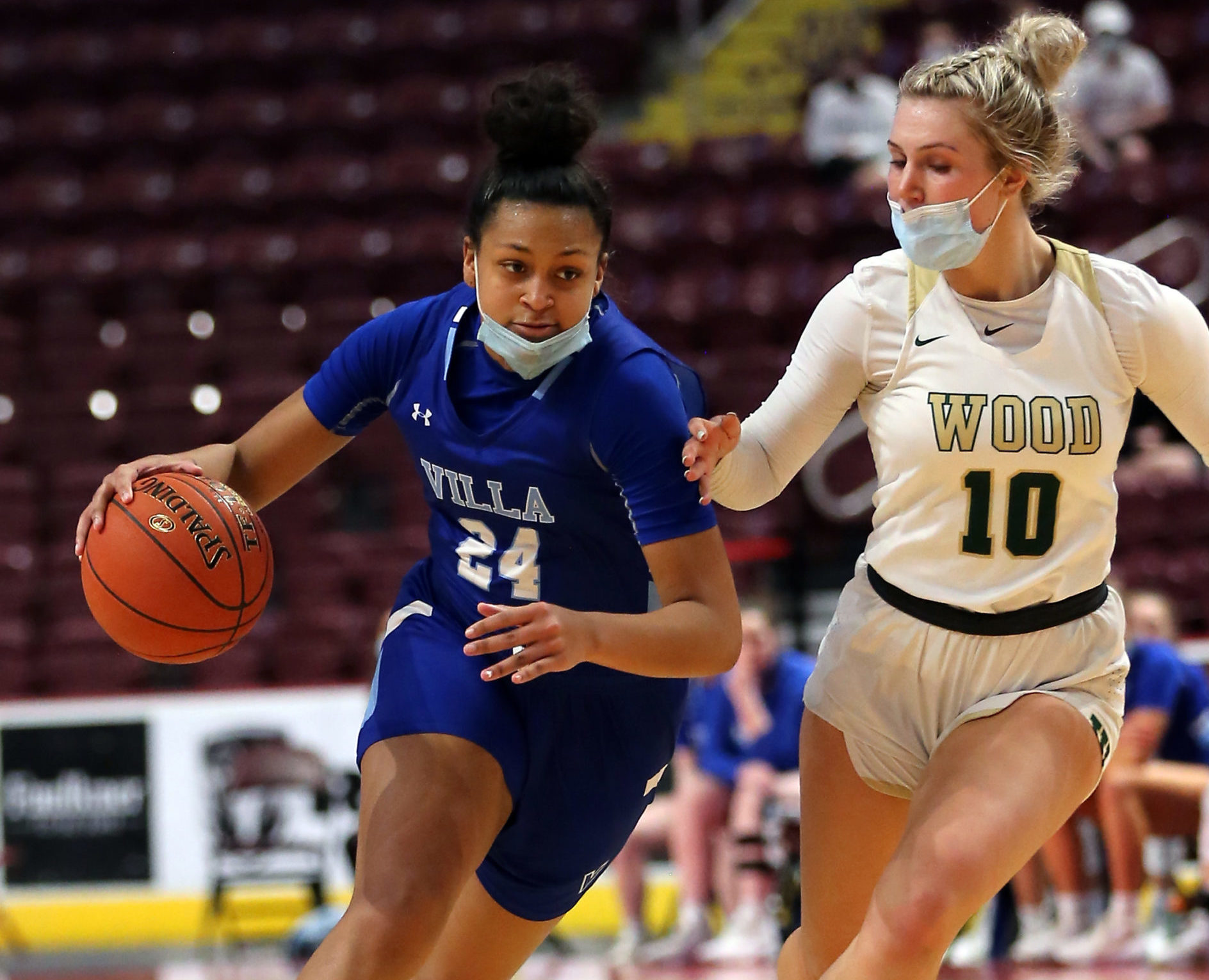 Villa's Jayden McBride went 8-of-8 from the free-throw line in the fourth quarter of Thursday's win over Warren. File photo by Paul Burdick.

WARREN, Pa. – Villa Maria jumped out to a 19-3 lead and withstood a second-half rally to beat Warren 50-35 in a battle of the top two teams in the Region 6 standings.

Villa, which improved to 9-2 overall and 5-0 in the region, got 17 points from Daniela Shaughnessy, who scored nine of her points in the fourth quarter.

Shaugnessy was named Allegheny Grille of Foxburg Player of the Game and talked about the win afterward:

The Victors went 12-of-14 at the free-throw line in the fourth quarter to put the game away, including an 8-of-8 effort from Jayden McBride, the Victors second-leading scorer who was held without a point until the fourth.

Warren trailed 20-14 at halftime and got back-to-back buckets from Gracie Ruhlman to cut the lead to two, 20-18.

Villa responded with a 7-0 run, and the lead hovered around between five to nine points for most of the second half.

Carissa Dunham scored 10 of her 12 points during the first half run for Villa, while Lena Walz came off the bench and was also in double figures with 11 points, including a key triple after the two buckets from Ruhlman to begin the second half.

Emma Ruhlman scored nine of her team-high 12 points in the second half for Warren (10-3, 3-1), while Riley Childress finished with nine points.

Freshman Alana Stuart came off the bench and scored eight points for the Dragons, who suffered their first loss to a Pennsylvania team this season (their other two losses came in Florida).

NORTH EAST, Pa. – Fairview outscored North East by 14 in the first half in a 55-41 Region 3 win, keeping their perfect record intact in the process.

Bre Heidt led the way for Fairview, scoring 16 points, including six in the fourth quarter.

Hope Garrity and Sara Gennuso were also in double figures for the Tigers with 13 and 10 points respectively.

Grace Sanfilippo led North East with 16 points, 14 of which came in the fourth quarter, while Alex Cozzzens added 11.

Four Blue Devils were in double figures, as Maddie Yanc connected for a game-high 14 points, Makenzie Yanc 13 and Finley Rauscher 11, and Hailee Rodgers 11 each.

Julia Patterson had 10 points for Seneca, while Lauren Konkol and Baylee Dernar added nine each.

SHARPSVILLE, Pa. – Lakeview scored 44 points in the second half in a 63-43 Region 4 win over Sharpsville.

Reese Gadsby led the way for Lakeview, pouting in 22 points, 17 of which came in the second half.

Kelsey Seddon was also in double figures scoring for the Sailors with 15 points, while Alaina Peltonen added eight.

Breanna Hanley had 15 points and 16 rebounds for Sharpsville, while Alli Davis added 12 points.

LINESVILLE, Pa. – Jaelyn Blood had 12 points to go along with six rebounds, four assists and three blocks in Conneaut’s 58-26 win over Meadville.

Avery Phillips had 11 points and Phoebe Templin nine for Meadville.

FRANKLIN, Pa. – Camdon Bashor had 12 points and 10 rebounds as Franklin powered to a 42-28 Region 5 win over Hickory.

Franklin led 19-9 at halftime en route to the win.

Anthony also dished out seven assists in the win.

Carlie Beatty had 26 points and 10 boards for the Big Reds, while Caitlin Stephens added 14 points.

Maplewood outscored Saegertown 15-4 in the third quarter, extending their lead to 17 points.

Eimer had 21 points, including three triples, while Thomas had 20 points. Liliane Moorhead was also in double figures scoring for Maplewood with 11 points.

Gianna Bedel led the way for Slippery Rock with a game-high 16 points, while Katie Book added 10.

Bronwyn McCoy and Ella McDermott added seven points each for the Rockets.

Skylar Riedel and Miranda Nickerson had seven points each for Corry.

Brooke Przybylski had 14 points and Samantha Zank 10 for the Huskies.

Jan. 20, 2022 Wrestling: Brookville Powers to Win Over Curwensville; Redbank Valley Bests Franklin
Jan. 20, 2022 D9 Girls: Clarion Rallies Past C-L; Redbank Valley Come from Behind to Beat N. Clarion; ECC Edges Ridgway
This website or its third-party tools process personal data.In case of sale of your personal information, you may opt out by using the link Do not sell my personal information.
×
Manage consent