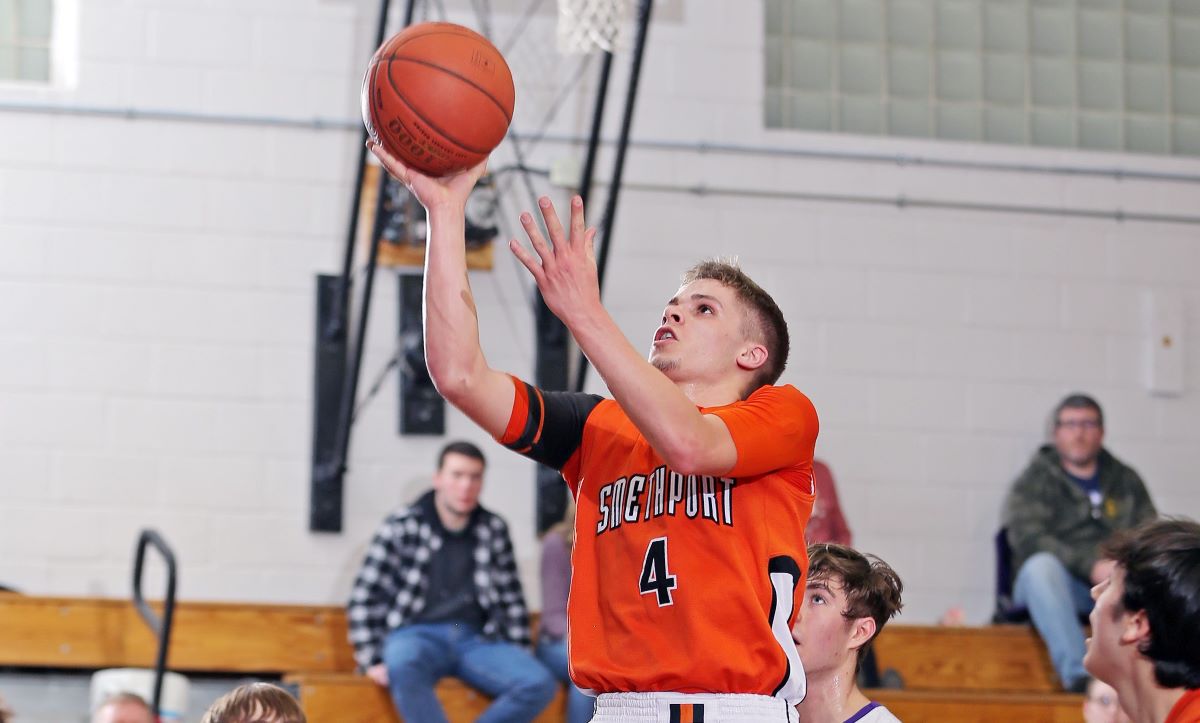 Alex Ognen of Smethport floats in to score two of his career-high 40 points in the Hubbers win at Coudersport Thursday. Photo by Paul Burdick. Check out more of Burdick's work here

COUDERSPORT, Pa. – Alex Ognen may be the first Smethport player to score 40 points in over 50 years, as he exploded for 40 in a 73-50 NTL win at Coudersport.

Ognen hit 13 shots in the game, including five 3-pointers, while going 9 of 11 from the free-throw line.

He finished four points shy of the school record set by Bert Clark on March 3, 1971, in a game against Austin. Clark made 16 field goals and was 12 of 13 from the line in that game. Clark is the last Smethport player available in records to score at least 40 points in a game, although others may have done so.

Ognen is the second District 9 player to top 40 points this year joining Curwensville’s Ty Terry, who netted 44 in a win over Glendale Dec. 20.

Preston Alfieri added 18 points for Hubbers in the win.

ST. MARYS, Pa. – Hayden Brown scored the lone basket of the second overtime, as Cameron outscored host St. Marys 3-0 in the second extra session to pick up a 37-34 win.

The game was tied at 27 at the end of regulation and then both teams scored eight points in the first overtime, including a buzzer-beater by the Dutch to send the game to a second extra four-minute period.

Brown had a huge came for Cameron County with 22 points with Alan Erickson adding seven for the Red Raiders.

The Gators trailed by three, 58-55, with five seconds left but missed a 3-pointer before Manning Splain hit two free throws to seal the win.

Landon Francis scored a career-high 30 points, including 16 first-half points when he hit five of his seven 3-pointers. He added five assists.

ULYSSES, Pa. – Dawson Hooftallen and Jacob Hooftallen combined for 29 points to lead visiting Austin to a 45-26 win at Northern Potter in NTL action.

Jan. 20, 2022 D9 Girls: Clarion Rallies Past C-L; Redbank Valley Come from Behind to Beat N. Clarion; ECC Edges Ridgway
Jan. 21, 2022 District 9 and District 10 Basketball Schedules Powered by Hunter’s Station Golf Club
This website or its third-party tools process personal data.In case of sale of your personal information, you may opt out by using the link Do not sell my personal information.
×
Manage consent