Instant Classic: Emma Ruhlman Sinks Three Free Throws with No Time to Give Warren the D-10 5A Title 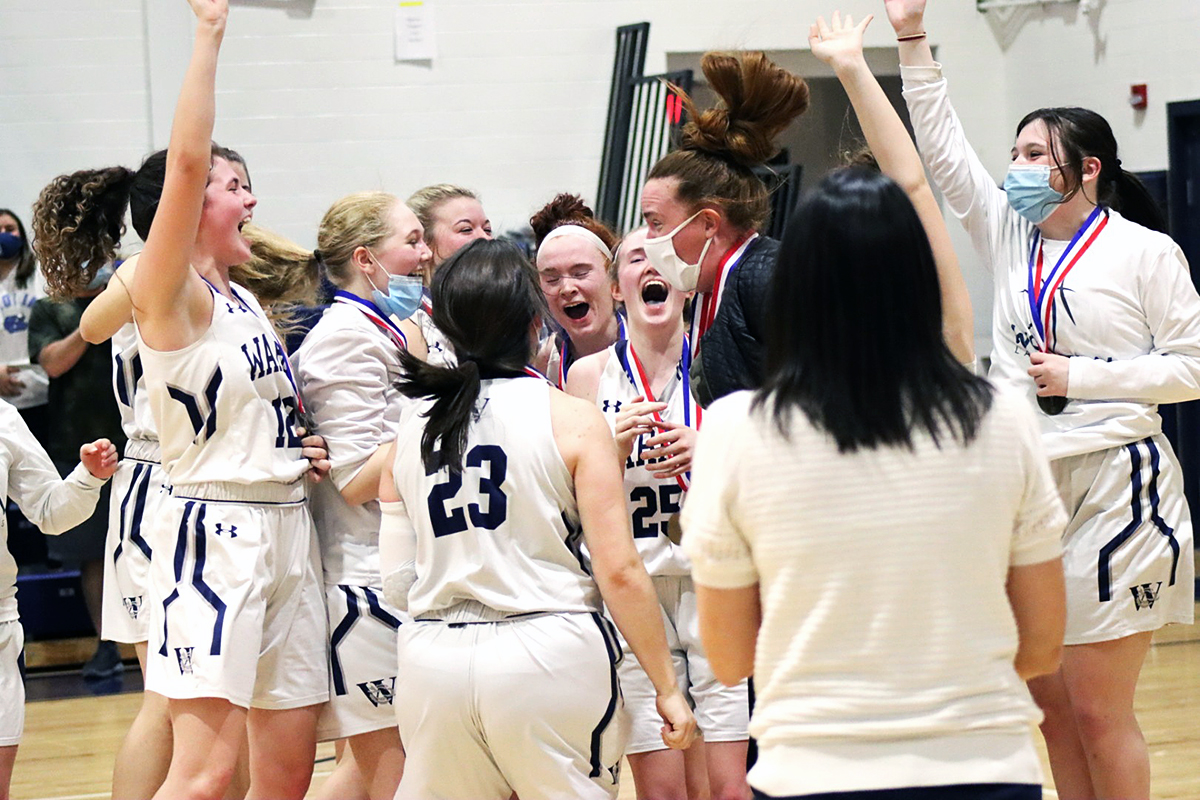 WARREN, Pa. – It’s the moment athletes dream of, a chance to win a championship in walk-off fashion. In fact, some of the Warren girls’ basketball players even talked about this exact scenario following Friday’s practice.

“What if we get the chance to win it at the free-throw line?”

Trailing Slippery Rock, 39-37, with five seconds to play in the District 10 Class 5A title game, junior Emma Ruhlman came away with a rebound and headed up the court. Her buzzer-beating 3-pointer didn’t go in, but she was fouled on the shot and headed to the free-throw line with a chance to tie or win the game.

She hit the first, then buried the second. Finally, she hit nothing but net on the third and had just enough time to take a seat on the court before being mobbed by her teammates in celebration of the program’s third D-10 championship, a thrilling 40-39 victory.

“Me, Kelsey and Riley were just talking about that last night about that exact situation, going to the line knowing you need to make them all to win it,” Ruhlman said.  “After the first one went in, I was like, ‘Emma, you got this.’ I am just very proud of my team.”

On the ensuing possession, Gracie Ruhlman hit a 3-pointer, her third of the game, to put Warren back on top, 35-33. The Rockets’ Anna Kadlubek tied the game at 35-35 with less than six minutes left.

With 4:39 to play, Slippery Rock’s Maryann Ackerman was assessed a technical foul after a battle for a loose ball. Emma Ruhlman hit both free throws to give the Dragons a 37-35 advantage.

Bronwyn McCoy’s layup with 1:58 left tied it at 37-37. It looked like Riley Childress had given the Dragons the lead with 25 seconds left, but her layup was waved off as she was called for a charge on the play. Slippery Rock went quickly down the floor and Hallie Raabe found Kelly Benson open underneath for an easy layin and a 39-37 lead.

“We talked about upping the tempo,” Warren coach Lisa LaVan said. “We knew being a tie game they were going to want to hold for last shot. They did a nice job and scored off of it then we had to come down the other end and get that last shot.”

Emma Ruhlman missed on a floater at the other end and fouled Benson on the rebound. With the Rockets in the bonus, Benson headed to the line for a one-and-one. Benson missed on the front end and Emma Ruhlman collected the rebound to set up the final sequence.

“It was such a slugfest. It was just a great game,” LaVan said.

Those shots capped a 10-10 day from the line for the Dragons. The Rockets finished 5-13 from the stripe, and never went more than 1-2 on any trip.

“I thought my kids fought really really hard,” Slippery Rock coach Amber Osborn said. “I know that everyone’s gonna remember the moment the shot went up, she got fouled and hit the free throws. We did a lot to ourselves before that point to get to be in that point. If we make some free throws, (if) we don’t get a technical foul, you know, all those little things hurt us throughout the game.”

The game-winning free throws were just the third, fourth and fifth points of the game for Warren’s leading scorer (15.2 ppg). In fact, Warren’s top two scorers, Emma Ruhlman and Childress, were held without a field goal in the game. They combined for seven total points, all coming from the free throw line.

“We knew Slippery Rock was going to come in and slow down Emma and Riley,” LaVan said. “They did a fantastic job of it too. We knew the other three needed to step up, we’ve been talking about it the last two days. They were ready. Two great seniors that have been with this program for so long. Amazing kids, I’m so happy for them. They stepped up, I’m proud of them.”

“We definitely knew that they were going to key in on Riley and Emma,” Stuart said.  “So we had a game plan of Lisa just telling us that we had to step up. We knew that this was going to be our last game on this floor so we just put it all out there.”

Watch the full postgame interview with Stuart and Paris

“I knew what (Stuart, Paris and Gracie Ruhlman) were capable of,” Osborn said. “You’d rather them have to make shots than the two that are averaging in the teens. I wouldn’t change that part of our game because that’s what kept us in the game.”

Paris (3.9 ppg) and Gracie Ruhlman (3.2 ppg) both finished in double figures with 13 and 11 points, respectively, while Stuart (6.2 ppg) had nine points and five assists. Emma Ruhlman pulled down 14 rebounds.

“The game would not have been as close as it was if Teagan and Kelsey and Gracie didn’t step up like they did,” Emma Ruhlman said.

Gracie Ruhlman got things going immediately for Warren by hitting a 3-pointer on the opening possession. Slippery Rock’s Anna Kadlubek picked up the first of her game-high 21 points on a free throw and Benson’s field goal tied the game at 3-3, the first of five ties in the contest. Paris and Kadlubek each scored consecutive field goals to make it 7-7, and Stuart knocked down a pair of free throws to send Warren to the second with a 9-7 advantage.

Paris scored five of the seven points, including a traditional 3-point play, as Warren used a 7-2 run midway through the second to grab an 18-10 lead. The Rockets responded with a 10-2 run of their own, Kadlubek had both a 3-pointer and a traditional 3-point play during the run, to tie the game at 20-20. Gracie Ruhlman knocked down her second 3-pointer of the game with six seconds left in the half to give the Dragons a 23-20 lead.

For the third time this postseason, the Rockets trailed at the half. In their previous two games, they came out and exploded offensively in the third quarter to take control of the game.

McCoy, who scored nine of her 11 points in the second half, hit a pair of shots in the first 90 seconds of the quarter to give Slippery Rock its first lead of the game, 24-23. The lead was short-lived as Stuart buried a 3-pointer on the next possession to put Warren back on top, 26-24. That three started a 9-2 run for the Dragons that gave them a 32-26 advantage heading to the fourth.

Warren will face the WPIAL champion (either Trinity or Chartiers Valley, championship game is Monday at 8 p.m.) on Saturday, March 20, at a time and location to be announced.