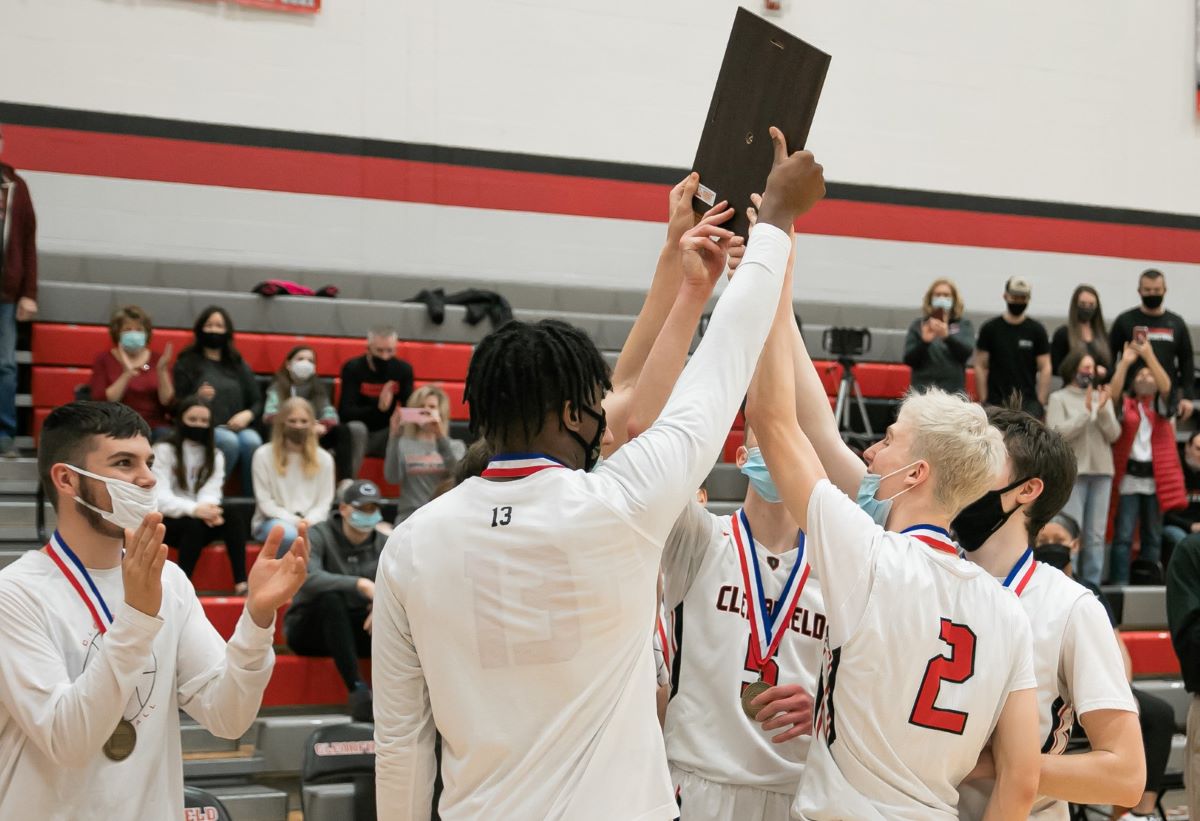 Having won six straight District 9 titles dating back to the 2014 season, Clearfield added another title with a 48-39 victory over St. Marys in the District 9 Class 4A boys’ championship game Saturday at Clearfield High School.

“It’s nice to keep the streak alive,” Clearfield senior Luke Winters said. “Six is good but you know you gotta keep it going.”

Three-point shooting was key for the Bison as they knocked down nine 3-pointers in the game with Cole Miller leading the way with six.

Miller finished with a game-high 20 points while Karson Rumsky contributed 19.

“Having players like that on your team makes it easier to play,” Clearfield senior Nick Ryan said. “They take a lot of the scoring toll away and you kind of just play your game and you know your role.”

With the Bison leading by nine heading into the fourth quarter, a pair of 3-pointers from Holden Houser and Drake Caskey got the Dutch within six, 36-30.

However, a 3-pointer by Miller and a Rumsky field goal extended the Bison lead back to 11 less than a minute later.

Offensively, St. Marys knocked down four 3-pointers in the fourth quarter but the deficit and strong free-throw shooting from Clearfield was too much to overcome.

The Bison closed out the game with Winters going 3-for-4 and Rumsky going 4-for-6.

“Those are really important,” Winters said. “Coach Glunt makes us practice those like three times a practice. We focus on them a lot in practice. It really paid off in the end”

Watch Winters and Ryan talk about the victory

A pair of 3-pointers from Cole Miller and Karson Rumsky helped the Bison jump out to a 16-9 lead at the end of one.

The Dutch were held to only three field goals in the second quarter and a Miller three as time expired gave the Bison a halftime lead of 26-15.

Clearfield continued to extend their lead with a 7-2 run to start the quarter to make it 35-17 halfway through the third.

However, free throws and a 3-pointer from Caskey helped fuel a 7-0 run for the Dutch in the final two minutes of the third to cut it to 33-24 heading into the fourth.

“They didn’t quit,” Clearfield head coach Nate Glunt said. “Give St. Marys a lot of credit for keeping the game interesting and they kept fighting back. So to win like we did today was really special.”

Clearfield, though, locked down and didn’t allow the Dutch to continue the comeback.

“We practice defense a lot,” Ryan said on the Bison not allowing St. Marys to get any closer after their late run in the third. “Coach Glunt told us to be lower on defense during a timeout.”

Along with the 39 combined points from Miller and Rumsky, Winters chipped in six points and Ryan Gearhart had a 3-pointer in the first quarter.

Houser paced the Dutch with a team-high 15 points while Caskey knocked down three 3-pointers on his way to nine points.

“Every year is different,” Glunt said of his championship teams. “It’s one in a row with this group. You have new players every year but our kids have just been fantastic the whole season.”

Instant Classic: Emma Ruhlman Sinks Three Free Throws with No Time to Give Warren the D-10 5A Title
Warren’s Madigan Leads D9/10 Contingent at PIAA Diving Championships
We use cookies on our website to give you the most relevant experience by remembering your preferences and repeat visits. By clicking “Accept All”, you consent to the use of ALL the cookies. However, you may visit "Cookie Settings" to provide a controlled consent.
Cookie SettingsAccept All
Manage consent