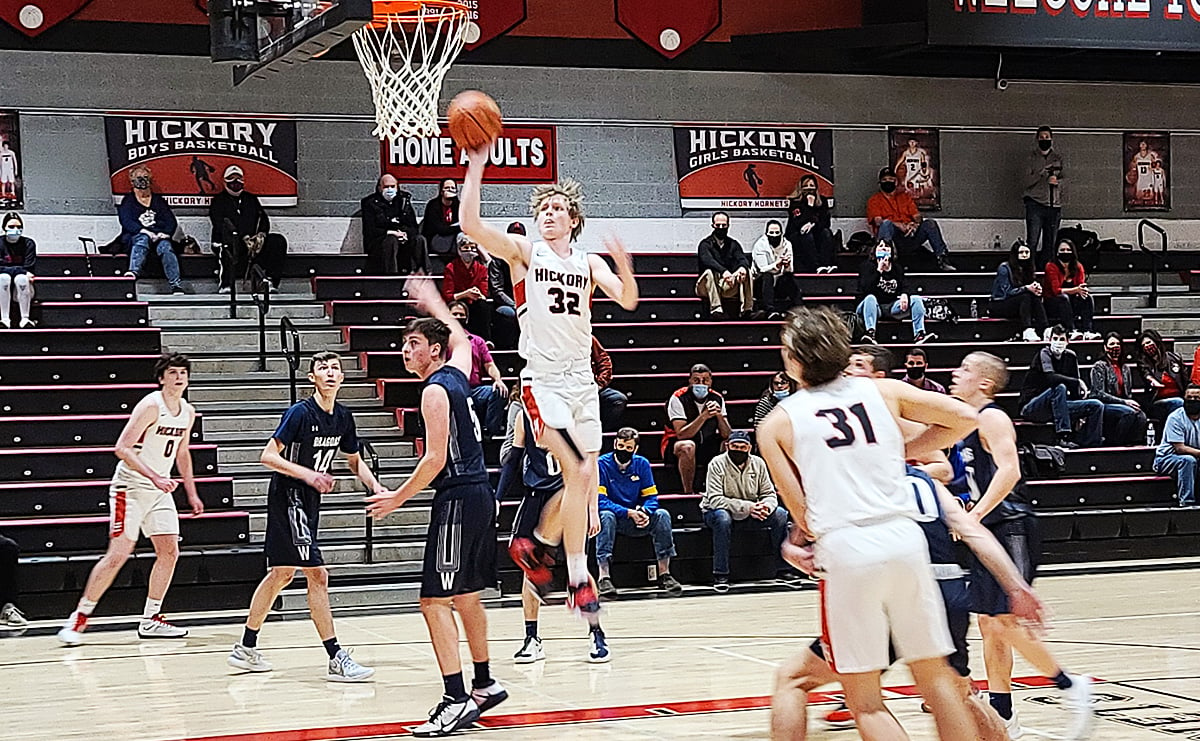 HERMITAGE, Pa. – Hickory held off Warren’s fourth-quarter rally to advance to the District 10 Class 5A championship with a 45-34 victory Tuesday.

(Hickory’s Connor Evans goes up for a shot during the first half of a District 10 Class 4A semifinal game against Warren Tuesday. Evans had a game-high 16 points as the Hornets advanced to the D-10 title game Friday.)

The Hornets (20-3) had a 9-point advantage after the third quarter but the Dragons (17-6) were able to get within three twice in the final frame. Despite struggles at the free throw line early in the stanza, Hickory was able to knock down enough late to pull away for the win.

Parks Ordiway’s 3-pointer early in the fourth cut the deficit to six and the Dragons slowly chipped away at the lead. There was some confusion on the court following a Warren field goal. Dragons head coach Jeff Berdine tried to call a timeout, but the official didn’t see it until after handing the ball to Hickory for the inbound. Both teams started walking toward their respective sideline, but with no timeout officially called, it resulted in a violation on the inbound and a Hickory turnover. Peyton Barnes knocked down a 3-pointer on the ensuing Warren possession to cut the lead to three, 31-28, at the 4-minute mark.

Both teams had opportunities to take control of the game, but Hickory’s Joey Fazzone went just 2-6 from the free throw line and Warren didn’t hit another field goal until there was 1:48 left to play. The Hornets’ fortunes at the line changed when Peyton Mele, Connor Evans, Matthew Cannone and Jackson Pryts went a combined 12-15 down the stretch. Hickory allowed just two more Warren field goals the rest of the way to seal the win and a trip to the D-10 title game Friday.

Pryts talked about the win following the game.

Evans had a game-high 16 points, including seven in each of the first and fourth quarters. Mele had 11 and Pryts 10 in the win.

Barnes was the only Dragon in double figures with 11 points. Ordiway and Berdine had eight each.

The game started as a fast-paced offensive contest with both teams trading buckets through the first quarter. Mele and Ordiway each showed their 3-point shooting stroke early as they each knocked one down in the game’s first three minutes. They would make just one more combined, Ordiway in the fourth, for the remainder of the game.

The defenses showed out in the second quarter as the Hornets and Dragons combined for just three field goals in the period. Hickory led 19-13 at the half.

Hickory opened the third quarter with a 6-2 run to push the lead to 10, 25-15. The Dragons got a Ben Berdine field goal and a JT Blum free throw to pull within nine, 27-18, heading to the fourth.