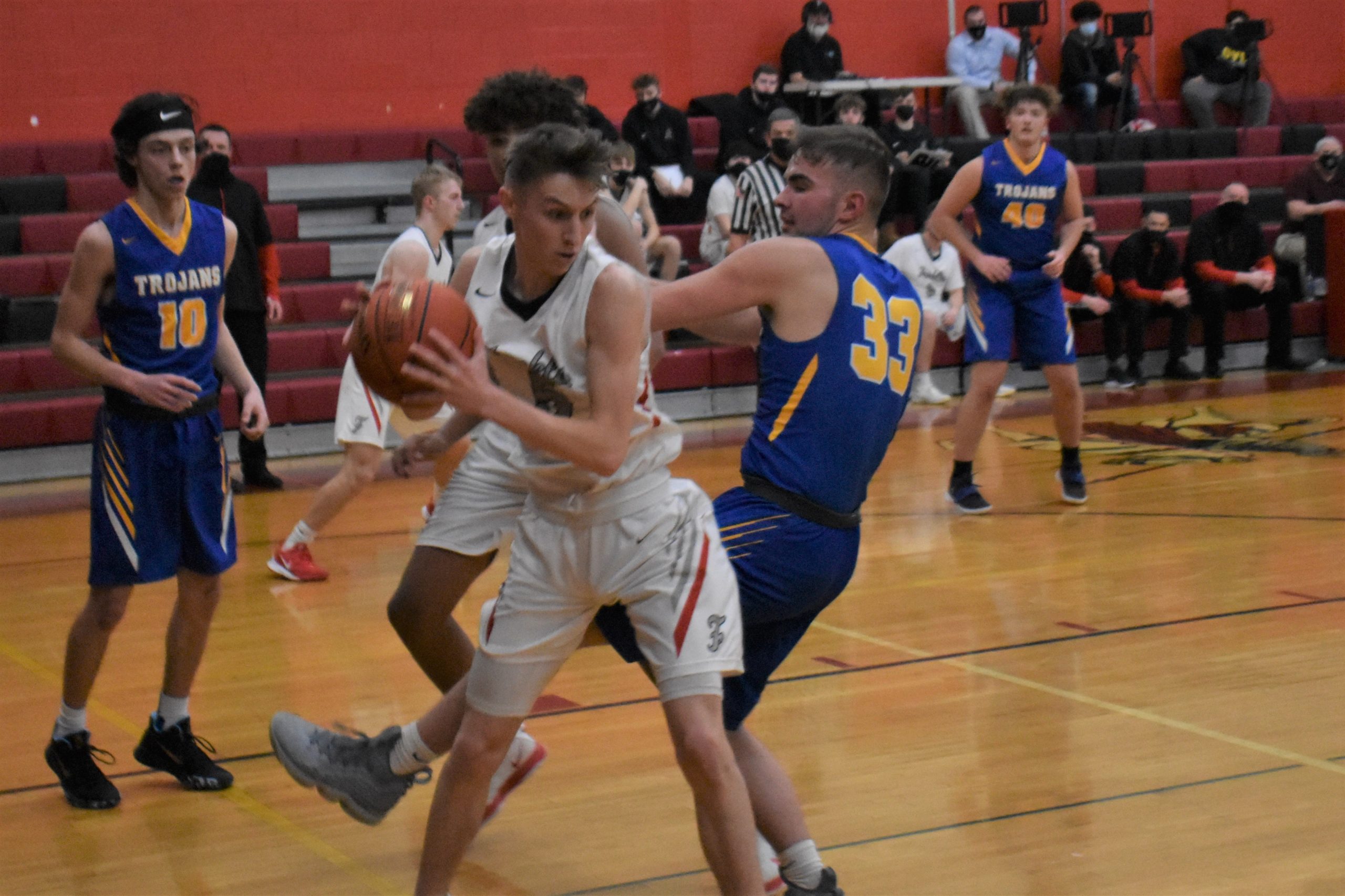 The result was a 77-58 win for the host Knights that propelled them into the D10 title game.

In the process, they also put to bed that old adage that it’s tough to beat a good team three times in a season.

“Great start, obviously,” said Franklin coach Jason Fulmer. “There’s been a lot of buzz, a lot of noise; Greenville has been playing really well, obviously. They played us really well over there, but I thought that the difference was, we played them early in the year, and we’re a different team right now.”

Greenville’s Ben Cano drives to the bucket while being defended by Franklin’s Damon Curry.

The Knights, after getting off to a slow start in their quarterfinal game against No. 8 Seneca, had no such problems this time around.

Easton Fulmer scored 18 of his 20 points in the first half, Luke Guth had 15 of his 20 in the second and a total of five Franklin players made multiple 3s.

Guth and Fulmer talked about the win afterward:

“I feel like we’re a five, six-headed monster now,” coach Fulmer said. “You can’t just take Easton away, you can’t just take Hayden (Adams) away. There are other guys. Luke had an incredible night tonight. I don’t know what his efficiency was, but it was through the roof.”

The Knights (18-6) led wire-to-wire, but Greenville pushed them, much like they did twice in the regular season.

Franklin’s execution offensively just proved to be too much, especially to start and end quarters.

Greenville tied the game at 13 late in the first on a Jonah Lentz jumper, but Franklin followed with a Damon Curry deuce and an emphatic dunk from Guth to close out the period.

The Knights ran 1:30 off the clock to start the third quarter, a possession which ended in an open 3 from Zak Smith, which he buried.

“We talked about the Sharon game last year (a 52-50 semifinal loss),” coach Fulmer noted. “Same situation, semifinals, we’re up 8 or 10 and we shot ourselves in the foot. I talked to the guys about how much we’ve matured. Look, we can run a buck and a half off the clock, shorten the game down and we’re going to get a great look. I think that means a lot. That showed maturity. I think we’ve gotten much better at that, our basketball IQ.”

Franklin led by double digits the rest of the way

Brady Kincaid and Jalen Ritzert knocked down 3s in the third quarter to keep Greenville within arm’s length, but Franklin had an answer each and every time.

The lead grew to as many as 17 in the third.

Guth, Adams and Curry put the finishing touches on the win in the fourth, combining to score 16 points in the final eight minutes.

Kinkaid was brilliant in the second half for Greenville, scoring all 12 of his points, while senior 1,000-point scorer Ben Cano ended his brilliant career, battling all night on the interior and finishing with 11 points.

“I give credit to Greenville, they did a heck of a job,” coach Fulmer said. “They hit some 3s – very uncharacteristic of Greenville to hit that many 3s, I don’t know what it is, but you might as well get out the peach basket when they’re playing us … but they battled. They kept us around. We kept them at bay, but they didn’t pack it in by any means.”

With the win, Franklin meets Sharpsville, a winner over Mercyhurst Prep, for the D10 title on Friday.

The two teams are very familiar with one another, having met three times last season, including a Franklin win in the third-place game, as well as twice this year, both wins by the Knights.

“In all reality, we’ve created a pretty good rivalry with those guys,” noted Fulmer. “We played them three times last year, went and battled with them two times this year. I think that everybody for the most part, had us projected on a crash course. I’m glad we got there. That’s always the concern when you’re picked that early. Sharpsville’s a great team and it’s going to be a great game. We’re excited about it.”

Hickory Holds Off Late Warren Push to Advance to D10 4A Title Game
Miller’s, Rumsky’s Hot Shooting Lifts Clearfield Back to D9 4A Title Game
We use cookies on our website to give you the most relevant experience by remembering your preferences and repeat visits. By clicking “Accept All”, you consent to the use of ALL the cookies. However, you may visit "Cookie Settings" to provide a controlled consent.
Cookie SettingsAccept All
Manage consent