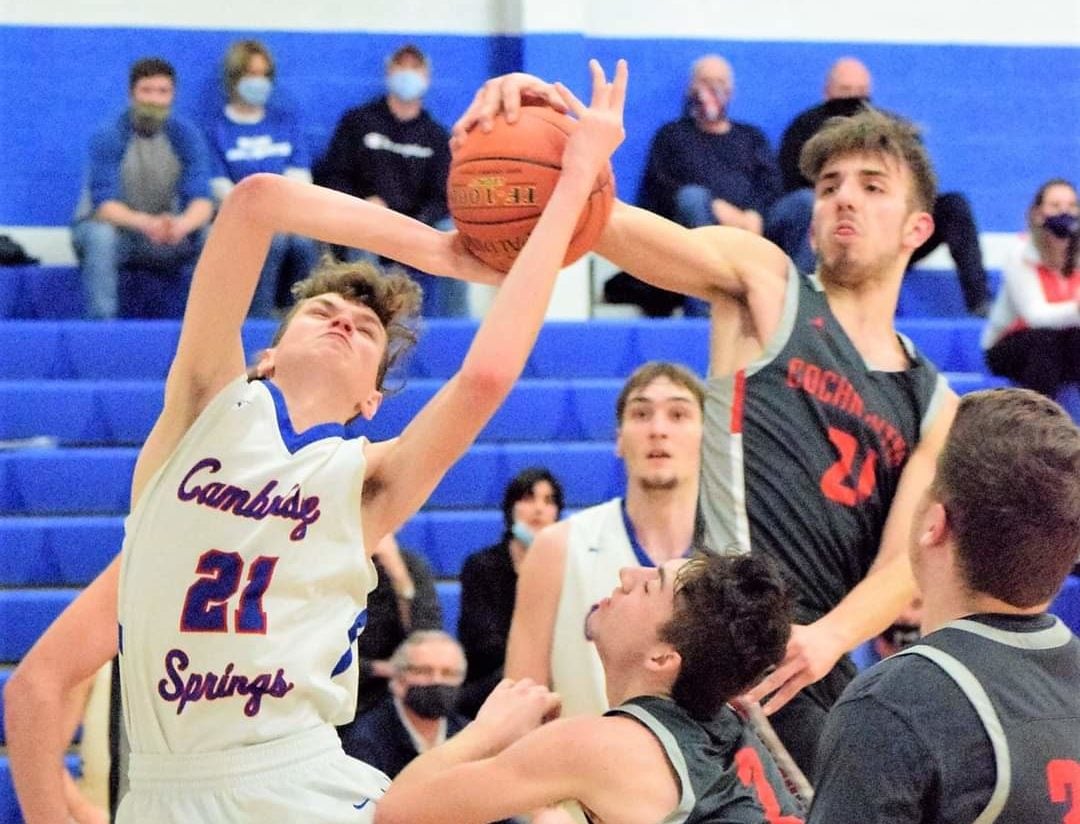 CAMBRIDGE SPRINGS, Pa. – Cambridge Springs rallied from an 11-point halftime deficit to beat Cochranton 52-47 and advance to the Class 2A title game on Friday.

In doing so, they avenged a loss to Lakeview in the semifinal round a year ago.

It’s also the third time they beat Cochranton this season, this one the toughest of them all.

Jayden Shinksy, Hunter Spaid and Nathan Held led the comeback, finishing with 15, 14 and 13 points respectively, as the Blue Devils trailed by as many as 15.

Cochranton came out of the gates red hot, scoring 20 points in the first quarter to take a 9-point lead, which swelled to double digits at the half.

Cochranton ends its season with a record of 14-8.

HERMITAGE, Pa. – Kennedy Catholic led from start to finish in a 67-37 semifinal win over Lakeview.

The Golden Eagles (21-2) had a 9-point advantage at the end of the first quarter and went on a 24-7 run in the second to take a 26-point halftime lead.

Dajaun Young led Kennedy with 24 points, while Elijah Harden knocked down five 3s on his way to a 17-point performance.

Sky’Ler Thomas was also in double figures with 11 points as the Golden Eagles, moving to Class 2A this season, advanced to the title game against Cambridge Springs.

The win was the 10th straight for KC.

Lakeview, which finishes with a record of 12-8, had three players in double figures, got 11 points from Isaac Lightcap, while Lane Smith and Cameron Pence added 10 each.

The Blue Devils (15-9) also got it done without second-leading scorer Ryan Ladjevich, who missed the game due to injury.

Jackson Doyle, coming off a 45-point performance in a quarterfinal win over Erie First Christian, was terrific once again, pouring in 23 points.

The Blue Devils led by six after three quarters and were able to pull away in the fourth.

The win was a measure of revenge for the Huskies, who lost to the Eagles, 39-37 in last season’s semifinal round.

Sam Howell scored nine points in the first half and finished with a game-high 17 for the Huskies (22-2).

Jaden Rocco scored 11 of his 13 points in the second half, while Cody Smith finished with 12.

March 9, 2021 District 9 and District 10 Playoff Basketball Scores
Hickory Holds Off Late Warren Push to Advance to D10 4A Title Game
We use cookies on our website to give you the most relevant experience by remembering your preferences and repeat visits. By clicking “Accept All”, you consent to the use of ALL the cookies. However, you may visit "Cookie Settings" to provide a controlled consent.
Cookie SettingsAccept All
Manage consent