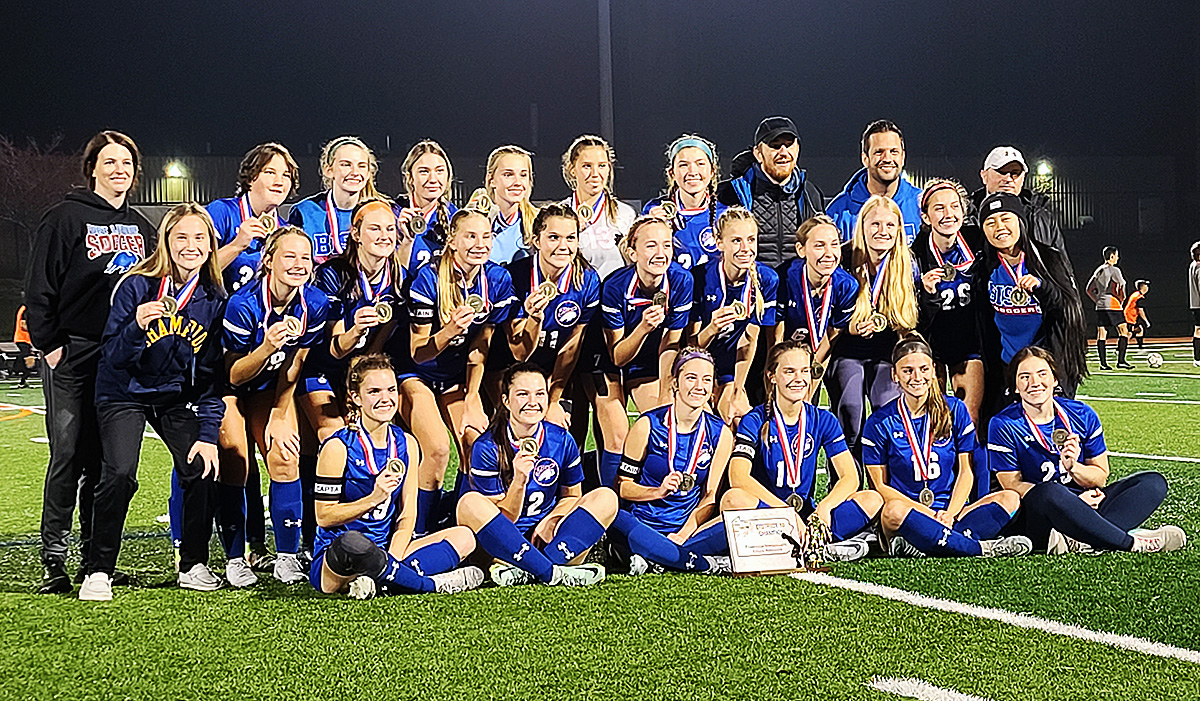 ERIE – It took just 3:29 for Fort LeBoeuf to score a goal in the District 10 Class 2A championship against General McLane. The Bison spent most of the remaining 76:31 making that goal hold up in a 1-0 win over the Lancers.

Fort Leboeuf keeper Gabby Green was busy during those final 76 minutes, and came up with some big saves when the Bison needed them most.

“They’re a great team, I expected nothing less,” Green said. “All of us together helped stop them.”

Early on, it looked like the Bison might be the one’s getting all the chances. They were able to spring Elise Cacchione on a breakaway and Cacchione was able to go far side past Bella Dibble for the lone goal of the match.

Just 3:29 in and @FLBGirlsSoccer is on the board thanks to this Elise Cacchione goal pic.twitter.com/VckMJlGezt

The Bison sprung Cacchione again about a minute later, but this time Dibble was up to the task and the Lancers were able to flip the field.

Not only was Green up to the challenge, but the Bison defenders limited the Lancers’ ability to generate quality scoring chances, beyond the set plays.

Lancers have applied pressure, but so far Gabriella Green has had the answers pic.twitter.com/N1WXPwm6e7

“They were amazing,” Green said of the Bison defense. “They all supported each other. I couldn’t have done it without them.”

Green just got a hand on one of the Lancers’ best chances of the second half. With about 13 minutes to play, General McLane had a throw from the 10-yard-line. The ball bounced past one set of players and right to GM’s Sydney Rotko. Rotko took the ball turned and fired toward the far post. Green made a diving stop to preserve the lead.

Green with a huge stop with just over 13 mins to play pic.twitter.com/mLHxVh5349

The Lancers had a pair of free kicks with under a minute to play. The first set up the second, but the second bounced off a Bison and back down the field as time ran out.

Both teams have advanced to the PIAA tournament and will play in first round games on Tuesday at sites and times to be determined. Fort LeBoeuf will take on WPIAL No. 3 team North Catholic, while General McLane faces the WPIAL champion (either Mt. Pleasant or Avonworth).

Gamboa scored the Lakers’ first goal, off a header from Ganger, then drew a penalty late in the match to set up Ganger’s PK goal to seal it.

“We feel great, guys are screaming, there’s a lot of energy right now and it feels great for the boys,” Ganger said.

Right from the start, it seemed the field was tilted in Mercyhurst Prep’s favor. The Lakers were able to get sustained pressure in the offensive zone and created multiple scoring chances. Gamboa cashed in one of those chances 13 minutes into the match.

The Lakers got a throw deep in Huskies’ territory. Ganger headed the ball right to Gamboa’s foot and Gamboa ripped in inside the near post for a 1-0 lead.

Despite having control for most of the half, the Lakers were unable to find the back of the net and took the 1-0 lead into halftime.

Gamboa nearly had his second of the game early in the second half. He shot one far post that trickled past a diving Ryan Humphreys in net, but Caiden Taft was able to clear it to keep it a 1-goal game.

Moments later, Kenny Zacks got behind the defense and ripped a shot that went high and off the football crossbar.

Midway through the half, Harbor Creek had a pair of quality chances.

This time, the ball wound up in a scrum in front of the net and Spero was able to pounce on it to maintain the Lakers’ lead.

Somehow, Landon Spero kept this out to keep @MPSLakersSoccer ahead 1-0 pic.twitter.com/dgJl3xHEox

“We got on the back foot in the middle of the second half and it really felt like they were going to switch the tide,” Ganger said. “But we kept fighting. We stopped them and we found that second one.”

With just over 90 seconds to play, the Lakers got the ball in transition and Gamboa sprung free down the left side. He was tripped as he tried to weave his way through traffic and the Lakers elected to have Ganger take the PK.

“It doesn’t really matter who takes it in the end,” Ganger said. “I stood up, I’ve been here. I’m a 4-year starter and the captain and we felt I should take it. But someone passed it to Eric, and Eric drew the foul. It’s a team effort. Every goal is a team goal.”

The Lakers will take on the No. 3 team out of the WPIAL (either South Park or Quaker Valley), while the Huskies will play WPIAL champion Deer Lakes in the first round of the PIAA tournament on Tuesday at sites and times to be determined.

Karns City Girls Add to Trophy Case With D9 Title Game Win Over Brockway
Warren, Conneaut Set Up Showdown for D10 Class 3A VB Title After 3-0 Semifinal Victories
This website or its third-party tools process personal data.In case of sale of your personal information, you may opt out by using the link Do not sell my personal information.
×
Manage consent