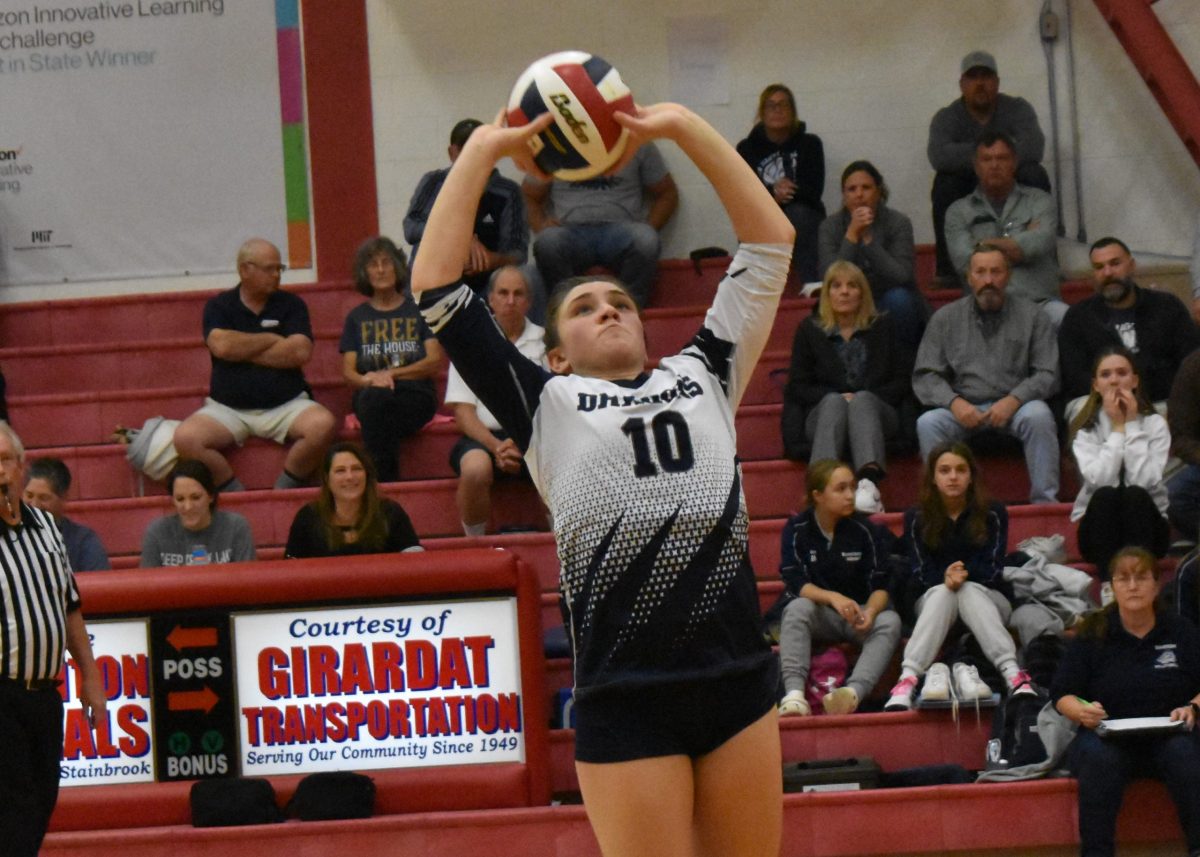 With the win, the Dragons advance to their first D10 final since 2018.

“It feels awesome,” said sophomore setter Lindsay Madigan. “We recently lost to Meadville, so to come back and beat them in three sets, it’s really good and it felt really good.”

Warren coach Mike Dolan knew defending Meadville’s high-powered attack, led by Emma Parks, would be a key to the match.

“In practice, we really talked about how we’re gonna defend them,” Dolan said. “I feel like it was really working in the beginning. That gave us confidence. Anything we could do to stop her (Parks), just make some digs, slow her down a little bit and keep them out of system as much as possible. That was the plan.”

It was actually a kill by Madigan that gave Warren its biggest lead of the first set, 18-14. Meadville twice got within one, including at 20-19, but a Maddy Jones ace helped Warren close out the first set.

“We didn’t want to get overconfident,” Dolan said. “I’ve seen it happen a million times where you win the first one and then come out a little flat. Maddy Jones with her serving, Summer Lucks with her defense, Alexia’s hitting, Carly’s hitting, too – it was just an all-around effort.”

The second set was all Warren, as they jumped out to a 12-5 lead and never looked back. Jones, Fehlman, and Bowers all had multiple kills in the set.

The third set was back and forth with huge momentum swings. Meadville claimed a 9-3 lead, prompting a Warren timeout. Warren went on a 12-1 run at one point and led 17-13, but Meadville came storming back, ultimately taking a 24-22 lead after a Chae Kennedy ace.

Warren didn’t relent, however, getting a kill from Beers and an ace from Jones to keep the set alive. Back-and-forth they went until a Beers kill gave the Dragons a 28-27 advantage, and they were able to close it out on a kill by Fehlman.

Lucks finished with a team-high 24 digs for Warren, while Madigan also had seven digs and Jones three aces.

Now, it’s on to the D10 final against top-seed Conneaut, and these two teams have some history in the postseason. Warren was the last team to beat Conneaut in the D10 playoffs, 3-1 in the D10 title game in 2018.

That year, Warren went all the way to the Class 3A state final.

COCHRANTON, Pa. – Ho-hum, just another berth in the D10 Class 3A finals for Conneaut.

“I was a little nervous because we came in after having a two-week break,” said CASH senior Sylvia Prebor. “But I feel like we came out very strong and worked together really well.”

Conneaut looked every bit the part of the three-time defending D10 champs, jumping out to an early 12-3 lead in the first set and never looking back.

“We came out with a lot of energy, which is what we wanted them to do,” said Conneaut coach Christine Krankota. “We’ve had a long layoff. It’s been about two weeks since we played a meaningful match and it’s really hard to tell how teams are going to come out after that long layoff. We challenged them to not start slow, to keep their energy and play together, and we thought they did that tonight.”

Hickory hung around for a little while in the second set thanks to a pair of early kills from Adalyn Duncan, but Conneaut’s offense was just too much.

Kaylee Mattera had 15 kills, while Prebor had nine and Lainie Harrington six.

They were set up all match long by junior setter Payten Karastury, who finished with 29 set assists.

Krankota if proud of how Karastury has developed and gotten better throughout the season.

“Payten’s had a difficult job coming into the season,” Krankota said. “She was transitioning from JV to varsity, on one of the most scrutinized positions, if not the most scrutinized position on the floor in setter. The girl is as mentally tough as they come. She’s got a great work ethic and she puts a lot of pressure on herself to excel. And you saw that tonight. I’m sure she had some jitters, but you couldn’t tell. She played very well.”

“Every girl played their role tonight and played very well,” Krankota said. “And it was a complete team effort. Kaylee, Lainie, Syliva, Mackenzie, Ginger (Woods), all had great opportunities and they all capitalized. We were very consistent with our passing we made Payton’s life easy. We weren’t out of system too often tonight, and it’s easy to run a good offense when you’re passing well.”

Conneaut’s Kaylee Mattera goes up for a kill attempt against Hickory’s Adalyn Duncan during their D10 Class 3A semifinal match. Photo by Andy Close.

“Warren’s a great team,” Krankota said. “They’re stout. Defensively, they serve tough. They’re going to be a whole different beast going into Saturday. Obviously, we’re going to enjoy this victory tonight. But we get back to work tomorrow because we’ve got a lot of preparation to do to get us ready to go to battle with Warren. They have a lot of energy. They’re very scrappy and they’re athletic.”