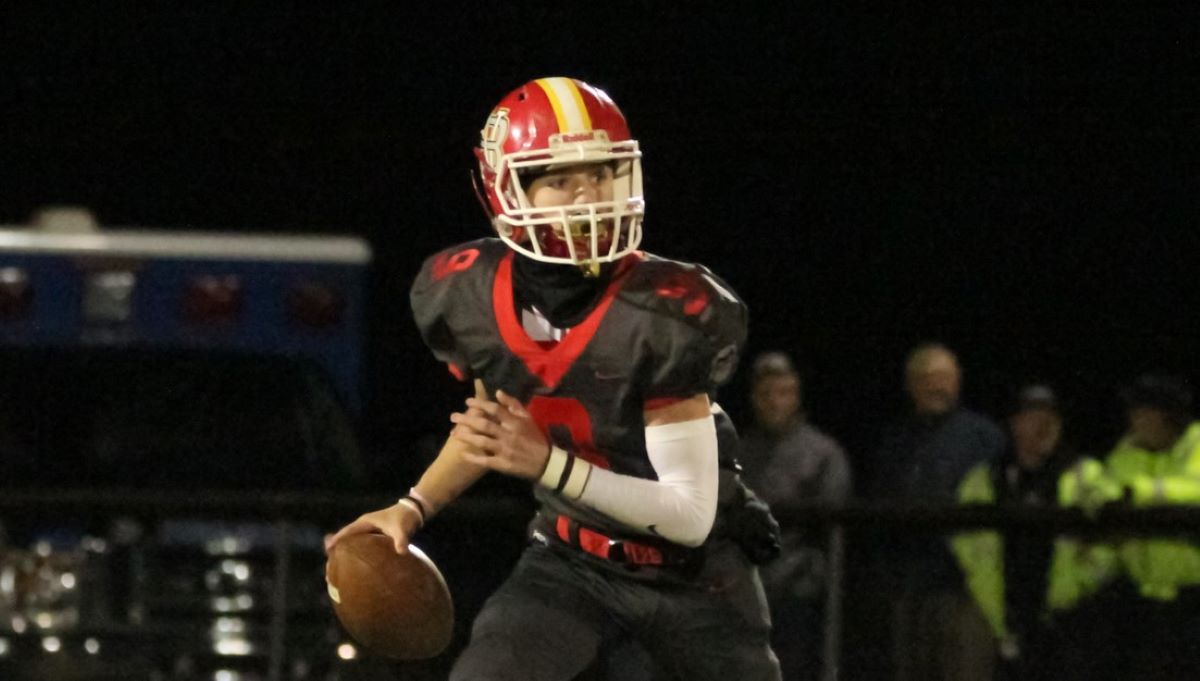 Listen to the game:

Wagner threw for 273 yards and five touchdowns to lead Redbank Valley to a 47-38 win over previously unbeaten Central Clarion County in the season finale on Friday.

“The first week I was thrown into it so I was kind of a little nervous, but now that the weeks have gone on, it’s gotten a lot better for me,” Wagner said.

It was a wild game in which Central Clarion (9-1) looked as if it was going to take a 23-20 lead into halftime, only to watch as Brandon Ross intercepted a Jase Ferguson pass and took a 27-23 lead at halftime.

And after Central Clarion had cut the lead to 41-38 in the fourth quarter, Mason Clouse made sure all three phases of the game scored, returning an onside kick attempt 51 yards for a touchdown with 3:09 to play to seal the win for the Bulldogs (9-1).

“All phases of the game,” said Redbank Valley coach Blane Gold. “We practice our special teams so much. Even on Thursday night, it seems so monotonous, but we line up our hands’ team, and we practice catching, covering up, and returning. It’s good to see that stuff pay off.”

He threw touchdown passes of 17 yards to Clouse and 24 yards to Aiden Ortz to stake Redbank Valley to a lead.

And he didn’t get rattled after Central Clarion’s Ryan Hummell tackled Ortz in the end zone for a safety and Ferguson connected with Dawson Smail on a 52-yard score with 2:19 to go in the half, instead directing a touchdown drive that was capped by a 19-yard touchdown strike to Tate Minich.

“I can’t say enough about Braylon Wagner, he just continues to get better and better,” Gold said. “Cam (Wagner) had earned the right to start, but we knew starting in the summertime that Braylon was really, really special. We haven’t been surprised because we see it all the time in practice.”

Rylan Rupp was on the receiving end of an 11-yard touchdown pass from Wagner in the third quarter and Wagner and Minich connected again in the fourth quarter, a 52-yard scoring strike that made it 41-31 with 10:32 to play.

That helped offset a big night from Ferguson and Ashton Rex. Ferguson threw for 293 yards and three touchdowns, including an 85-yarder to Rex (who finished with 209 yards receiving), but Redbank Valley also forced him into three interceptions.

Ferguson also had 71 yards rushing and two shorting scoring runs in the second half.

Ortz finished with 85 yards receiving for Redbank, while Minich had 81 and Clouse 75.

“Obviously we’ve gone through a lot of adversity the last two weeks,” Gold said. “We were down a starter on defense tonight. The way they came out and played fought and scratched and clawed and found a way to win, it was special.”

Backup QB Martin Uses Legs to Help Karns City Knock off Clearfield
Karns City Names Press Box After Long-Time PA Announcer Sam Swick
This website or its third-party tools process personal data.In case of sale of your personal information, you may opt out by using the link Do not sell my personal information.
×
Manage consent