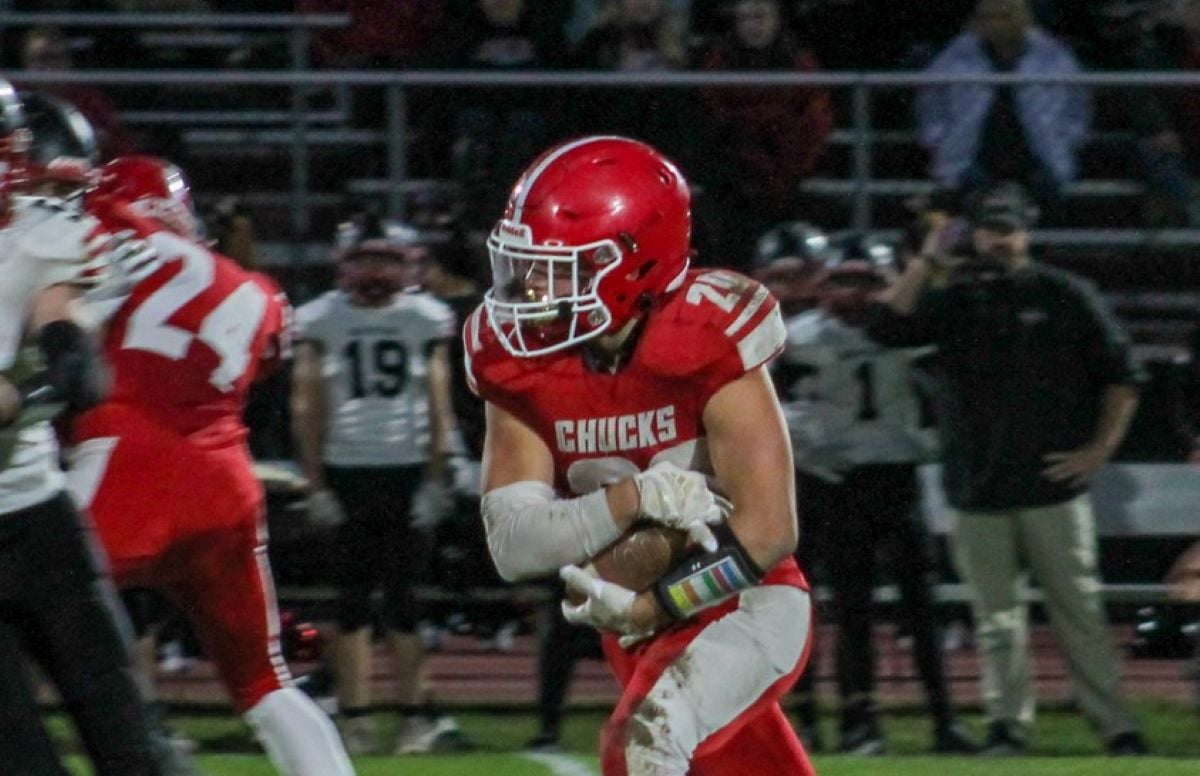 PUNXSUTAWNEY, Pa. – For the first time in eight years, Punxsutawney has secured a winning season.

Zeke Bennett had another big night for Punxsutawney (6-4) rushing for 30 carries for 194 yards and two touchdowns scoring on runs of 3 and 2 yards, while Seth Moore was 6-for-10 for 111 yards, a touchdown, and two interceptions. His scoring pass was a 53-yard bomb to Noah Weaver to start the scoring midway through the second quarter. Weaver finished with six catches for 90 yards.

Bennett’s first touchdown of the game came with just 10 seconds to play in the first half and gave Punxsutawney a 13-0 halftime lead.

Brody Dittman got Union/A-C Valley (5-5) back within six when he scored on a 31-yard run midway through the third quarter, but Landon Martz and Bennett each scored to put the game away for Punxsutawney.

Mikey Card led Union/A-C Valley with 14 carries for 48 yards while also going 1-for-1 passing for 35 yards. Skyler Roxbury had 18 tackles for the Falcon Knights while Ryan Cooper added eight tackles and an interception.

Both teams are headed to postseason play with Union/A-C Valley in 1A and Punxsutawney in 3A.

The Gators (9-1) scored 22 points in each of the first two quarters while tuning up for the District 9 Class 1A playoffs.

Moses ran 13 times for 100 yards and three scores while Archer had five carries for 70 yards and a touchdown while catching two passes for 69 yards and a score.

Drew Evens also ran for a touchdown and threw for a score in the win. He was 2 of 2 passing for 69 yards and ran twice for 22 yards.

Andrew Schenfeld threw a pair of touchdowns for Otto-Eldred while going 19 of 37 for 170 yards with two interceptions.

Moses had another strong defensive game for Port Allegany with seven tackles.

While Port Allegany will most likely be the top seed in the District 9 1A playoffs, it is not known if Otto-Eldred will choose to enter the postseason.

KANE, Pa. – Ricky Zampogna ran 28 times for 239 yards and three touchdowns and also went 5 of 8 passing for 97 yards and a score, as Kane finished the season strong with a 35-27 win over visiting and winless Bradford.

The highlight of the game was Zampogna’s 98-yard touchdown run with 4:46 left in the first quarter that gave Kane a 13-7 lead.

The Wolves (3-7) got the lead to 21-7 when Zampogna threw a 37-yard touchdown pass to Landon Darr before Bradford (0-10) scored the next two touchdowns tying the game on a 7-yard Talan Reese to Isaiah Fitton pass midway through the third quarter.

But Zampogna scored on a 27-yard touchdown run with 7:59 to play to put Kane back ahead, 29-21 following the Zampogna to Darr pass.

It took Bradford just 42 seconds to answer back with a 1-yard Nate Girdleston touchdown run to get within two. The Owls got a nice kickoff return to around midfield and then got some help with a roughing the passer penalty against Kane.followed by a long pass from Reese to Fitton that put the ball at the one.

But the 2-point conversion pass was incomplete, and Kane was able to put the game away with just 20 seconds left when Zampogna scored from a yard out.

Addison Plants added 12 carries for 73 yards and a touchdown for Kane with Darr catching four passes for 54 yards.

Girdleston carried 11 times for 71 yards and a touchdown.

The loss was Bradford’s 28th in a row and marked the third consecutive winless season for the Owls who were 0-7 in 2020 and 0-9 last season.

BROCKWAY, Pa. – Jendy Cuello had another big game on the ground for Brockway to help the Rovers end Cameron County’s four-game win streak with a 35-0 victory at Varischetti Field in Brockway.

Cuello broke the 1,000-yard mark on the season (1,019 yards) with his first 200-yard performance as he carried the ball 30 times for 207 yards and three scores. It was the third straight 100-yard game for Cuello and his fifth of the season.

Brayden Fox also threw for a pair of touchdowns going 15 of 32 for 197 yards with an interception for Brockway (6-4).

Andrew Brubaker and Dylan Hanna each caught touchdown passes with Brubaker hauling in two passes for 37 yards and Hanna three for 72.

Cameron County fell to 4-6 with the loss. The Red Raiders’ playoff decision was unknown at the time of the writing of this story.

BELLEFONTE, Pa. – Noah Peterson threw for two touchdowns, ran for one, and intercepted two passes while Brayden Kunselman scored three times to lead Brookville to a 41-3 rout at Bellefonte.

The Raiders (5-5) trailed 3-0 in the early moments of the game, but scored the rest of the points and set the PIAA Mercy Rule running clock into motion in the third quarter.

Peterson completed 12 of 20 passes for 168 yards while throwing an interception. He hooked up with Kunselman on back-to-back offensive plays from scrimmage for TDs covering 45 and 51 yards. Peterson also ran 28 yards for a touchdown, putting the Raiders up 27-3 by halftime.

Kunselman caught six passes for 116 yards and also returned a fumble he caused 23 yards for a touchdown in the second half. Jackson Zimmerman ran for 64 yards on 13 carries, scoring twice on runs of 14 and 18 yards.

The Raiders outgained the Red Raiders (1-9), 332-114. Bellefonte’s field goal came from 25 yards out off the foot of Logan Proctor with 8:06 left in the first quarter.

Peterson’s two pickoffs hiked his season total to seven, putting him a tie for the team lead with Kunselman. Truman Sharp also had an interception for the Raiders, who will likely play Karns City next week in the District 9 Class 2A semifinals.

WEST SUNBURY, Pa. – Kyle Nellis broke the 1,000-yard mark on the season by rushing 13 times for 170 yards and three touchdowns to help visiting Keystone to a 57-12 win at Moniteau.

Nellis has 1,005 yards and 16 touchdowns on the season despite missing two games with an injury.

Drew Keth was 5 of 6 passing for 68 yards and the three scores, while Aidan Sell also went over 100 yards on the ground with 11 carries for 113 yards.

Josh Beal continued his great kicking with a 34-yard field goal, his third field goal of the season.

It was DeLattre’s third touchdown catch of the game and his second in the final 9:32, as he helped the Tigers rally from a 35-24 fourth-quarter deficit.

DuBois took the 11-point lead on the first play of the fourth quarter when Dalton Yale scored to make it 35-24.

But DeLattre caught a 2-yard scoring pass with 9:32 left to make it 35-30 before Hollidaysburg’s winning drive was set up when DuBois failed on a fourth-and-3 play from the Tigers’ 45-yard line with 4:11 to play.

A big pass to Brady Steiner set Hollidaysburg up at the DuBois 27-yard line, and a pass interference call on the Beavers moved the ball inside the 20-yard line.

But a bad snap on a shotgun snap to Rossman found Rossman covering the ball at the 20-yard line bringing up fourth-and-18. But Rossman found an open DeLattre in the front right corner of the end zone.

DeLattre also caught a 21-yard touchdown pass late in the first half during a run that saw the two teams combine for three touchdowns in the final 3:27 of the first half, including two by Hollidaysburg, to go to halftime tied at 21/

Trey Wingard threw a pair of first-half touchdowns for DuBois, including a 43-yard pass to Cam-Ron Hays and a 3-yard toss to Kaden Calrk. Austin Henery also had a 1-yard touchdown run.

Hollidaysburg (2-8) started the game quickly when Jack Steiner returned the opening kickoff 87 yards for a score. Christian White added a 15-yard touchdown catch in the half as well.

Wingard had the best game of his young career going 18 of 25 passing for 301 yards and three touchdowns with Cam-Ron Hays catching eight passes for 211 yards and a score.

Aiden Zimmerman and Luke Zimmerman each scored a pair of touchdowns for Ridgway (2-8).

FLINTON, Pa. – Zeke Dubler ran 24 times for 319 yards and five touchdowns to lead Glendale to a 49-23 win over visiting Curwensville.

Playing in his final game, McGarry accounted for 396 yards of total offense going 18 of 34 for 250 yards and two touchdowns while rushing 12 times for 112 yards and a score and catching one pass for 34 yards.

The loss brought an end to a once-promising season for Curwensville (3-7), who started the year 2-0 before losing its final five games.