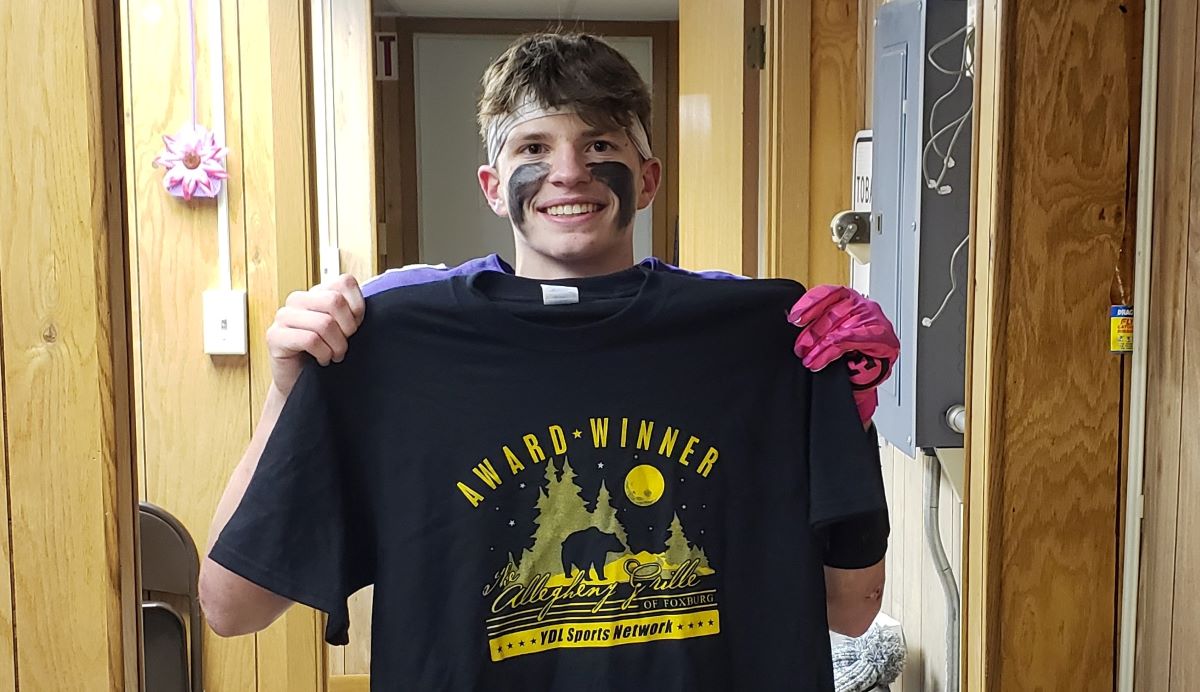 With starting QB Eric Booher on the sideline with his foot in a boot after being injured in the first half, Martin came on and ran for scores of 45 and 15 yards in the second half while carrying the ball four times for 62 yards.

“Honestly, I didn’t even see (Booher) go down,” Martin said. “I just remember my coaches yelling, ‘Mason, you are in at QB.’ Then, we go into the locker room at halftime, and they are like, ‘alright Mason, you are starting at QB.’ I was like, alright.”

“It’s a lot easier as a QB running the ball than as a running back running the ball because I have an extra blocker for me,” Martin said. “I knew that, so I ran outside the numbers. I saw a cutback lane, and I kept cutting back until I found open space.”

After Clearfield scored on a 2-yard run by Carter Chamberlain, his second of three scores to make it 28-20, Karns City and Martin answered with another score. This time it was Martin going in from 15 yards out following a Gremlins’ timeout.

“It was the same play, just flipped to the other side,” Martin said.

The big play of the four-play, 70-yard drive, was a 54-yard Carter Freeland run to the Karns City 16-yard line.

It was a big night for Freeland, who was forced into seeing action at both wide receiver and running back after starting running back Brady Collins left the game early in the third quarter with an ankle injury.

He ran 16 times for 121 yards and caught six passes for 122 yards and a touchdown. His 12-yard TD catch from backup QB Jacob Samsel with five seconds left in the first half gave the Bison (7-3) the halftime lead.

Samsel, forced into action when starter Will Domico injured an ankle in the first half, tried to rally Clearfield late in the game when the Bison took over at their own 37-yard line with 2:48 to play after the Clearfield defense forced a three-and-out following the third Chamberlain TD run.

That capped a strong night for the Gremlins’ defense despite giving up the 37 points.

“Clearfield’s a great team,” Martin, who was named the Allegheny Grille of Foxburg Player of the Game, said. “Coaches were talking all week about how they don’t make mistakes. The fact that we made them make mistakes today is really what helped us win this game.”

The game really turned in the first 4:31 of the third quarter when Karns City scored twice to turn the seven-point halftime deficit into a seven-point lead.

Braden Slater tied the game with a 36-yard touchdown run 1:33 into the half.

Karns City then recovered a Freeland fumble at the Clearfield 28-yard line, and five plays later Nathan Hess scored on a 1-yard run to give KC its second lead of the game, 21-14.

Martin’s first touchdown run then capped off a 21-point third quarter for the Gremlins before the fourth quarter became a back-and-forth affair.

Levi Hawk opened the scoring for Karns City on a 19-yard run on the Gremlins’ first possession ofthe game following a Domico fumbled snapped at the Karns City 47-yard line.

Clearfield tied the game late in the first half when Chamberlain scored on a 1-yard run with 1:26 to play before the break ending a 12-play, 75-yard drive that took up over half the quarter (6:02).

Karns City then went three-and-out using just 28 seconds off the clock giving Clearfield the ball back at its own 34-yard line following the punt.

After a 15-yard Collins’ run on first down, Samsel hit Freeland with a 28-yard pass to the Karns City 22-yard line with Freeland making a highlight-reel catch.

Collins then ran for 11 yards to the 12, and Samsel followed with the touchdown pass to Freeland.

Slater led Karns City with four carries for 77 yards with Hawk adding 11 for 64.

Samsel was 5 of 8 passing for 89 yards and the score, while Chamberlain ran 14 times for 65 yards.

Both teams are headed to the D9 playoffs with Karns City in 2A and Clearfield in 3A.