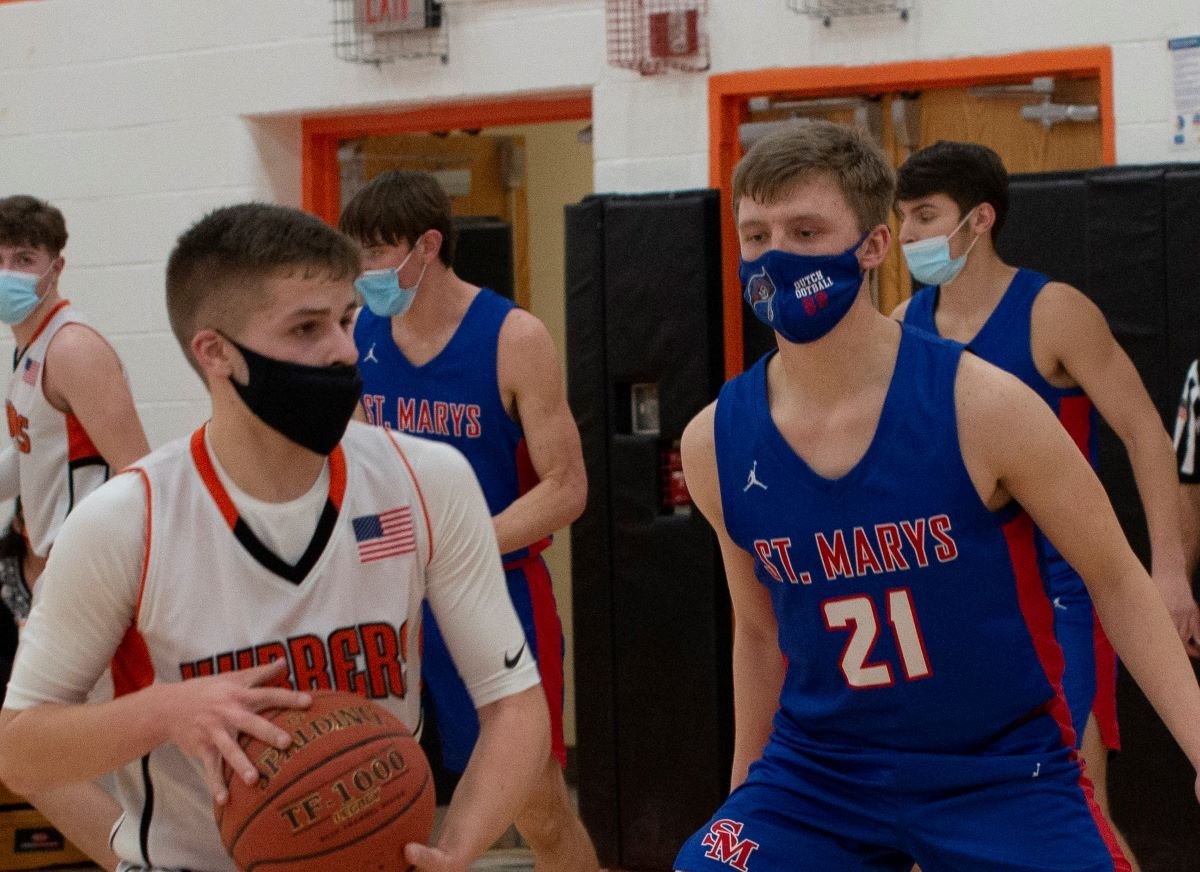 Alex Ognen of Smethport handles the ball during Monday's game as St. Marys' Mitchell Reiter looks on. Ognen played a key role in the comeback for the Hubbers. Photo by Barb Davis. See more of Davis' work here

Watch the basket and the free throw via Smethport’s Vimeo Livestream (the play occurs at the 2:24:12 mark of the video)

After the Hubbers took the lead, St. Marys had a chance for the win at the horn but a 3-pointer from Luke Lasko, following three times outs with 4.2 seconds left, was off the mark (watch the final play via the above video at 2:31:18)

Alex Ognen started the Hubbers comeback, though, when he scored on a layup with 2:53 to play following a steal by Richie McDowell.

A strange sequence then occurred about 40 seconds later.

St. Marys’ Bryce Walker was called for a questionable offensive foul following an inbounds play, and then the Dutch bench was whistled for a technical foul with 2:18 left.

But as Ognen readied at the free-throw line to shoot the technical free throws, the technical foul was rescinded leaving Smethport bwith the fall out of bounds.

Shall then scored and was fouled with 2:06 to play hitting the free throw to get Smethport within three, 45-42.

Both teams then missed the front end of one-and-ones before Lasko hit one of two charity shot to put St. Marys ahead 46-42.

Following a timeout, John Admoski came away with a loose ball steal for Smethport, but McDowell missed a shot with the Dutch getting the rebound.

Lasko then hit one of two charity shots with 45.8 seconds left setting up the final sequence.

Ognen led Smethport with 19 points with Shall adding 18 and McDowell eight.

Lasko had a team-high 16 points for St. Marys with Drake Caskey scoring 12 and Mitchell Reiter adding 11

The Bulldogs trailed 21-14 at the break but used charity stripe and some timely shooting from Bryson Bain and Chris Marshall to rally for the win.

Bain scored 18 of his game-high 21 points in the second half while going 9 of 11 from the free-throw line in the half, while Marshall added 11 of his 13 after the break.

The duo combined to score all 17 of the Bulldogs third-quarter points helping them climb back within three, 34-31, going to the fourth quarter.

Marshall then scored seven fourth-quarter points, Marquese Gardlock, who ended with 12 points, hit 6 of 8 free throws, and Bain hit 3 of 4 while scoring five points in the quarter to complete the comeback.

Kane led 40-34 going to the fourth quarter before Austin got hot.

The Panthers trailed 41-32 going to the fourth quarter before outscoring the Tigers 20-6 in the quarter to get the win.

In addition to Brown, Michael Moore helped lead the rally scoring seven of his eight points in the fourth quarter while hitting a key 3-pointer.

Tre Slawson and Ryan Langworthy each added 11 points in the win for Northern Potter with Nolen Smith contributing seven points.

Hartle scored eight first-quarter points to help the Wolves to an 18-7 lead at the end of eight minutes.

RIDGWAY, Pa. – Visiting Johnsonburg outscored rival Ridgway by 11 points in the second half to gain a 28-17 win.

The teams were tied at nine at halftime before Johnsonburg netted 19 second-half points to just eight for the Elkers, including 11-2 in the fourth quarter.

BROOKVILLE, Pa. – Riding out to a 27-4 start, Brookville cruised to a 71-45 win over visiting Sheffield.

Four Raiders reached double figures in scoring, led by Robert Keth who was perfect from the field with three 3-pointers and 13 points. Griffin Ruhlman had 12 points and eight rebounds while Hunter Geer and Jace Miner each scored 10 points.

The Raiders led 40-19 by halftime and started the PIAA’s Mercy Rule running clock by the 1:39 mark of the third quarter after a Keth 3-pointer made it 56-26.

Scriven and 10 points and 13 rebounds for the Warriors who also got 10 points from Ryan Jewart and nine on three 3-pointers from Kyle Pry.