Featured Game: ECC Pulls Away From Cameron County in Second Half 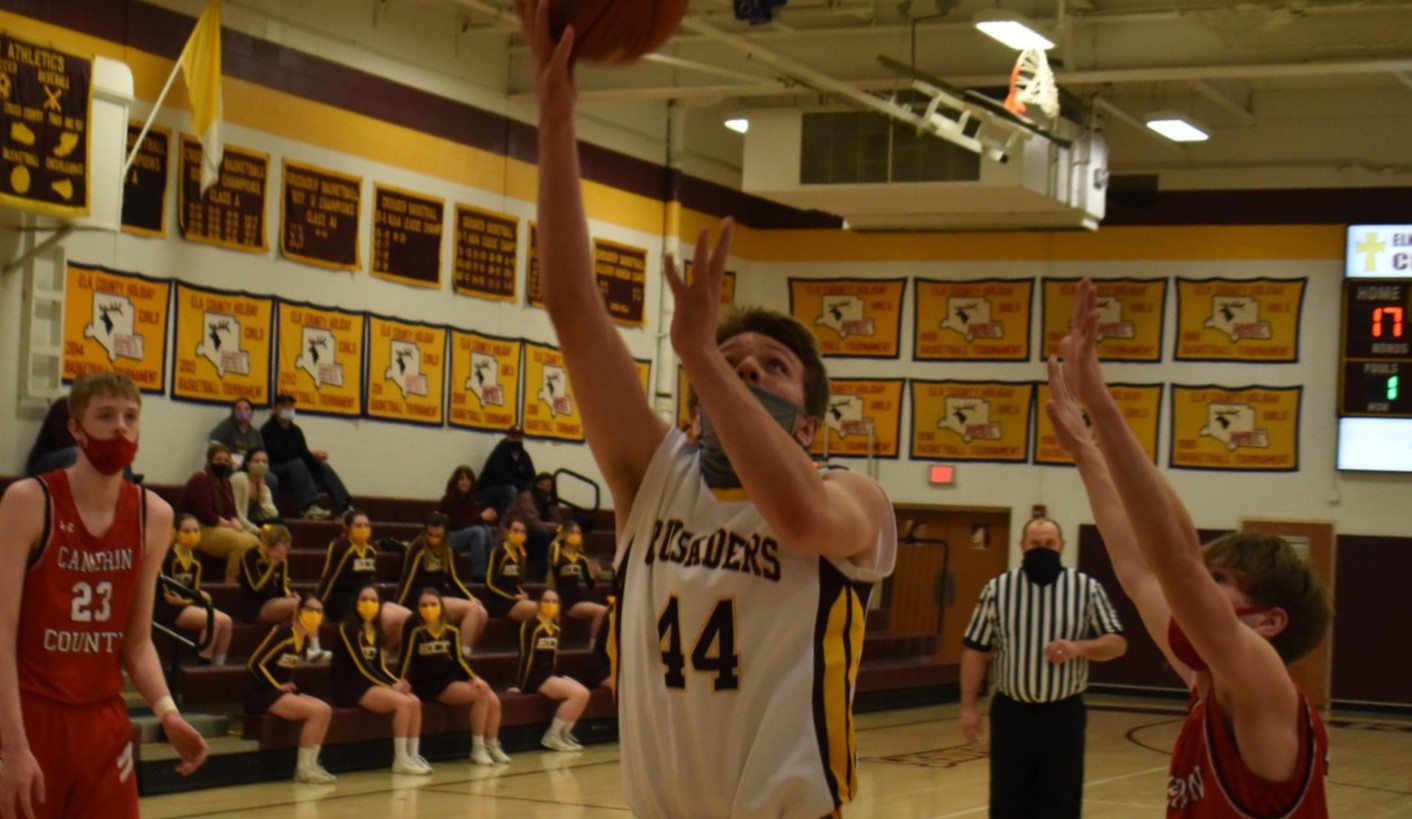 As it turned out, it was no problem for the Crusaders to overcome.

Luke Jansen scored 14 of his game-high 17 points in the second half as ECC rallied from an 11-2 deficit en route to a 54-39 win over the visiting Red Raiders.

“We needed a game like this where we found ourselves looking up from a pretty deep hole,” said Elk County Catholic coach Aaron Straub. “We did a nice job of battling back.”

The Crusaders (10-1) certainly did that, tying the score by halftime thanks to the strong play of  Mark Kraus and Charlie Breindel, who scored five points each in the second quarter.

The third quarter was where ECC really took control, as Jansen hit back-to-back 3’s and Kraus made another from distance, quickly making it an 8-point game.

Jansen talked about the win afterward:

“It’s easier to play defense when your shots are going in,” Straub said. “When we started making shots we got a bounce in our step. I thought we took the ball strong to the hoop. I thought a couple of Luke’s finishes were really good in traffic. Mason (McAllister) did a nice job battling as well.”

Cameron County’ Caden Beldin started off the game hot, scoring 11 points in the first half, but the Crusader defense put the clamps on in the second half as the lead swelled to double-digits.

Jansen put the finishing touches on his performance with eight points in the fourth quarter, as the Crusaders went 8-of-10 from the free-throw line over the final eight minutes to put the game on ice.

It was the second win of the season for the Crusaders over the Red Raiders, the first one a 52-51 overtime decision back on Jan. 9

“Cameron is a very good team,” noted Straub. “They put really skilled players on the floor. Let’s face it, we shot the ball pretty well from the end of the first quarter on, and that was a big part of why we were able to be successful tonight.”

It was all Red Raiders (10-2) in the first eight minutes, as Hayden Brown knocked down a 3 and Beldin drilled another with under 10 seconds remaining in the first quarter to give Cameron its 8-point cushion.

“I thought our intensity was okay from the start,” Straub said. “They made some shots and we didn’t.”

Kraus, Breindel, and Jansen all made 3’s in the second quarter to get ECC right back in the game.

Guisto made a pair of second-half triples as well for Cameron County.

Kraus finished with 12 points for ECC and McAllister and Breindel 10 each.

Beldin had 15 points for Cameron County, with Guisto adding 11 and Brown 10.

“We have a situation in our schedule now where we’re playing three games a week for four weeks,” noted Straub. “It’s up to us to bring the energy every night. We have some really challenging games ahead of us. We’re looking forward to that opportunity.”