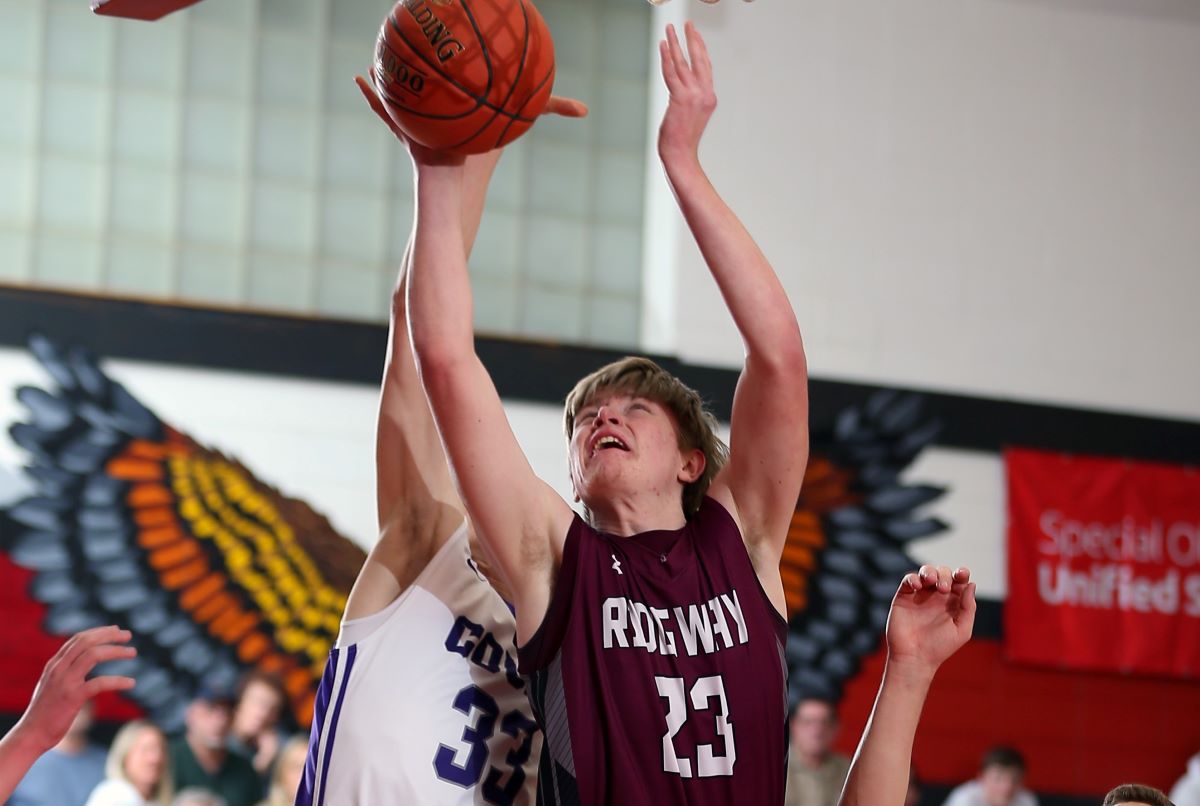 Watch the game-winning sequence on the Cameron County Facebook Live Video feed. The play starts at around the 2:42:22 mark of the video

The last-second shot was the exact opposite of what happened when the teams met in Ridgway Feb. 2 when Cameron County won on a buzzer-beating shot, 26-25.

This time around, the Red Raiders led by five, 30-25, after Caden Beldin hit one of two free throws with 4:22 left. The charity shots came after Cameron County held the ball for the first 3:38 of the fourth quarter with Ridgway not even making a move to challenge the Red Raiders until 3:07 had passed.

Allegretto, though, got the Elkers back in the game when he drilled a 3-pointer from the corner at the 3:50 mark to make it 30-28.

Then after an over-and-back call on Cameron County, Park tied the game when he took a pass from Alex Bon on a backdoor cut with 3:17 left.

After Beldin missed a shot, Ridgway took the lead, 32-30 on another backdoor cut, this time from Allegretto, pass from Bon on an inbounds pass with 1:01 to play. (The play can be watched at the 2:39:59 mark of the above video).

Beldin tied the game back up at 32 when he grabbed an offensive rebound off a missed shot by Hayden Brown and laid it in with 41.2 seconds left. (The play can be watched at the 2:40:23 mark of the above video).

But Beldin’s desperation 3-pointer was well off the mark.

BROOKVILLE, Pa. – Brookville outscored visiting DuBois by 11 in the second half to defeat the Beavers, 58-51.

The Raiders trailed 25-21 at halftime but used an 18-10 third-quarter advantage to take the lead.

WEST SUNBURY, Pa. – Logan Sell scored 14 of his game-high 21 points in the second quarter to help Keystone overcome a slow start and get a 59-50 road win over Moniteau.

The Panthers trailed 14-11 at the end of the first quarter before outscoring Moniteau 22-9 in the second quarter to take a 33-23 halftime lead.

Sell was on fire in the quarter hitting six shots, including a pair of 3-pointers.

Named the Allegheny Grille of Foxburg Player of the Game, Sell talked about his performance and the win.

Bret Wingard added 12 points for the Panthers with Colin Say chipping in 10.

JOHNSONBURG, Pa. – Cam Stelene and Eric Christoff each scored 10 points to help Johnsonburg to a 39-28 home win over St. Marys.

Josh Daum scored a game-high 19 points to lead the scoring for the Wolves with Dylan Walters chipping in nine.

Cameron Austin had a double-double with 11 points and 12 rebounds for Bradford. Gavin Pisctielli added four points and nine rebounds in the win.

RIMERSBURG, Pa. – Led by 18 points from Caden Rainey, Union had four players score in double digits in a 57-50 win over visiting A-C Valley.

Rainey scored 12 of his points from the free-throw line going 12 of 16 from the stripe.

Karter Vogle added 12 points for the Golden Knights, who have won three in a row and five of seven, while Brock Jordan chipped in 11 points and Skyler Roxbury 10.

BROCKWAY, Pa. – Nathan Waltman recorded a triple-double with 16 points, 15 rebounds, and 11 assists to help visiting Karns City to a 74-58 win over Brockway.

Chase Beighley added 24 points and seven assists and is now within striking distance of the Karns City school record of 1,554 career points set by Tyler Callihan in 2005. Beighley has 1,546 career points and needs eight to tie and nine to break Callihan’s school mark.
Micah Rupp also added 12 tallies for the Gremlins with Luke Cramer chipping in with nine points and 10 rebounds.

Marcus Copelli hit four 3-pointers on his way to a team-best 20 points for Brockway.

SENECA, Pa. – JT Stahlman returned to the lineup after missing four games with an injury and scored 14 points to lead Cranberry to its first win of the season, 57-23, over visiting Forest Area.

Cameron Russell added 12 points in the victory for the Berries with Ethan Merryman scoring nine and Noel Bunyak eight.

Anderson, who missed eight games with an injury, nailed six 3-pointers among his 12 made shots and scored 21 second-half points for the Panthers. It also helped him climb within 16 points of 1,000 in his career. He would be the first Northern Potter player since Josh Kosa in 1996 to record 1,000 career points.

German had a game-high 29 points to go with eight assists, while Verdill added 27 points, nine rebounds, and eight steals.

Christian Simko chipped in 13 points and seven rebounds for the Bobcats.

Mark Kraus and Charlie Breindel each scored 14 points to lead the Crusaders with Mason McAllister adding 13.