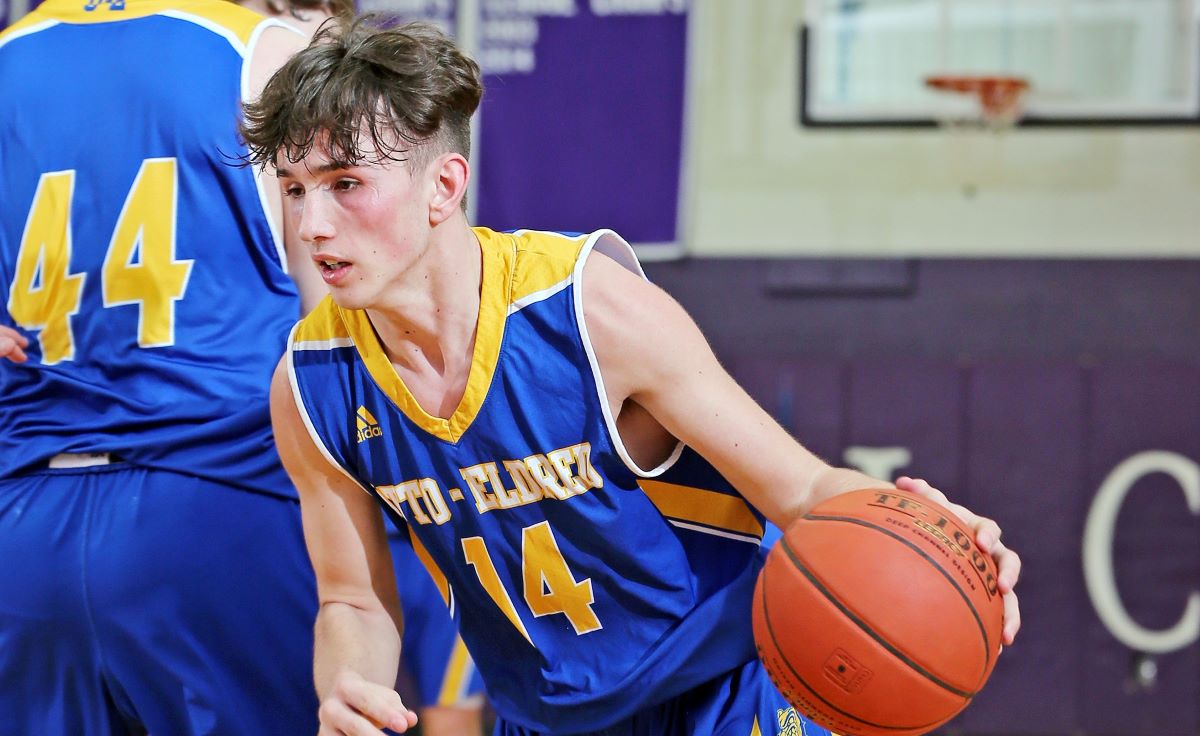 DUKE CENTER, Pa. – Manning Splain scored a career-high 28 points while hitting eight 3-pointers to lead Otto-Eldred to a 67-43 win over visiting Coudersport in a game that clinched the Terrors first NTL title in 22 years.

Gavin Jimerson added 17 points, four rebounds, and three assists, as Otto-Eldred won the league crown for the first time since the 1999-2000 season.

BROOKVILLE, Pa. – Brookville hung with visiting Vision Academy, an elite team out of Brooklyn, N.Y., for a half but ultimately fell by 29 to the visitors, 87-58.

Brookville led 21-20 at the end of the first quarter after Danny Lauer sank a half-court shot at the buzzer.

Vision Academy used a late spurt at the end of the second quarter to take a 43-36 halftime lead and then went on a 13-0 run in the third quarter to expand the advantage to 58-41 with 3:44 left in the quarter.

Holmes, who scored 15 of his points in the first half, was named the Allegheny Grille of Foxburg Player of the Game and talked about the win.

The Raiders subbed heavily in the second half once the Vision Academy lead went to double digits knowing they have a big game with Bradford coming up Friday.

One downer for Brookville was the potential loss of Clayton Cook. The junior forward injured an ankle in the first half and didn’t return.

The Gremlins are now 7-2 in divisional action with a 1 ½ game lead on 5-3 C-L. Karns City wins the tiebreaker by virtue of sweeping the season series from the Lions and still holds a far outside chance of winning the division but would need Redbank Valley to lose either all three of its remaining conference games.

Srock had 24 points and 20 rebounds for the Cardinals who also got 15 points from Brendan Paisley and 12 from Andrew Green.

Tony Richards added 17 points for the Wolverines who also got 12 tallies from Caden Copley, four assists and two points from Mason Silvis, and four points, three steals, and three assists from Lucas McNeal.

With the win, Redbank Valley needs either one victory or one Karns City loss to claim its first KSAC divisional crown since 2015 when it won the KSAC South.

Mason Clouse added 13 points and Owen Clouse 12 for the Bulldogs.

Tyler Albright added 15 points for the Panthers who also got seven from Zander McHenry.

Devon Lauer added 12 points and seven rebounds for the Bobcats who also got 12 points each from Gabe Simko and Ryan Alston and four points and eight rebounds from Daunte Girvan.

The Wolves hit 11 3-pointers on the night with Collins Schmader and Drake Irwin each adding two and Ethan Carll one.

Schmader contributed 11 points to the victory and Irwin a season-high eight.

Jake Liederbach hit three 3-pointers on his own and scored 19 points to lead Venango Catholic, as the Vikings hit five long balls on the night.

Logan Rakow chipped in 11 points for the home team, and Colin Liderbach had eight.

Eimer’s ‘Daggers’ Send Maplewood to Thrilling Win Over Cambridge Springs
Feb. 11, 2022 District 9 and District 10 Basketball Schedules Powered by Hunter’s Station Golf Club
This website or its third-party tools process personal data.In case of sale of your personal information, you may opt out by using the link Do not sell my personal information.
×
Manage consent