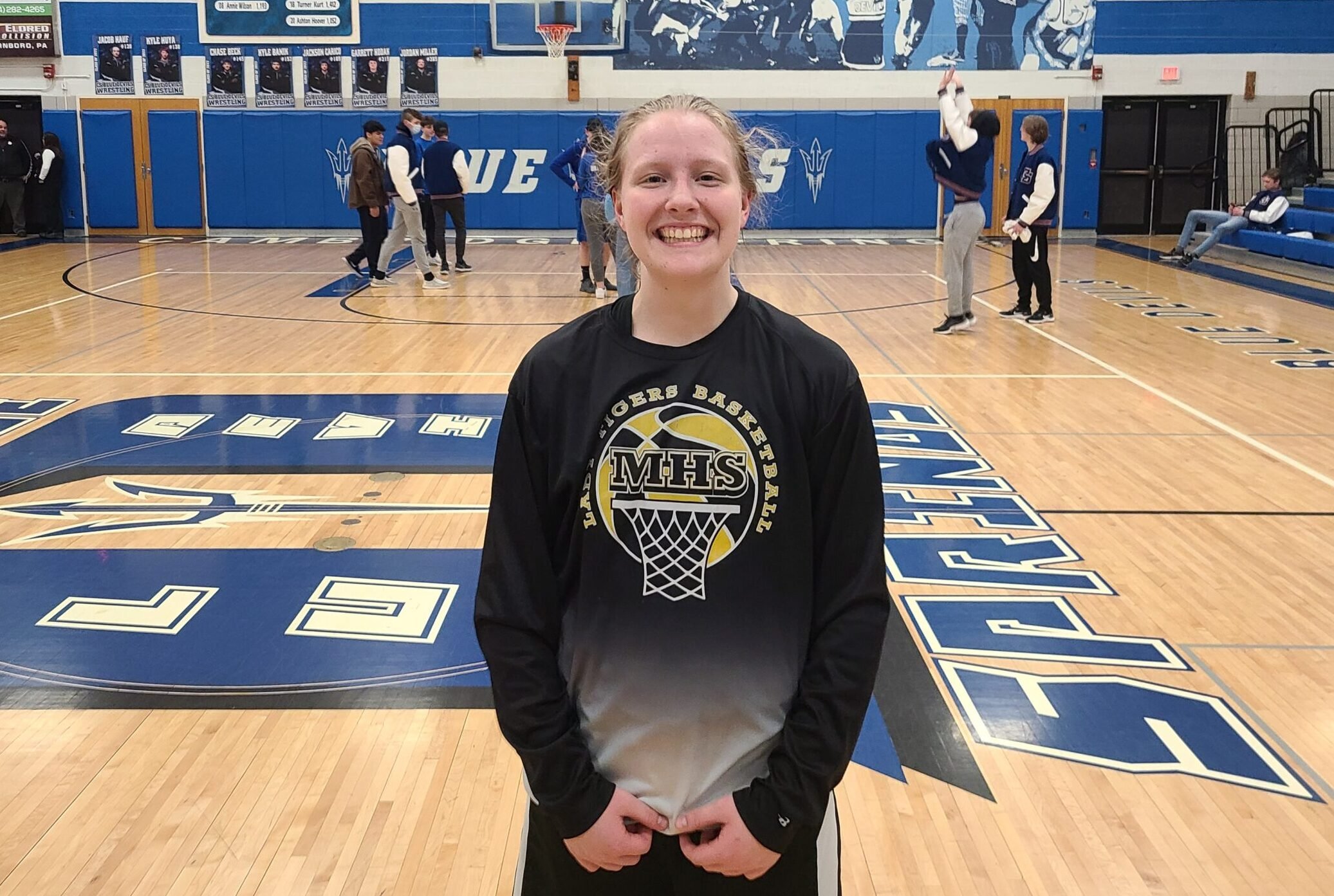 With Maplewood trailing rival Cambridge Springs 33-32 in the fourth quarter, Eimer drilled back-to-back triples, the latter of which came with 1:41 to go as the Tigers earned a thrilling 40-35 win.

It’s been part of a special week for Eimer, who also joined the prestigious 1,000-point club in a victory over Cochranton on Monday.

“Actually my three hasn’t been falling,” Eimer said after the game. “I felt confident in both shots. I knew it had to go up because they were playing off me. With them being off me, I had the confidence and I hit the daggers.”

Eimer’s two threes in the fourth were the only two the Tigers hit all game – and they were huge.

“We’re not going to stop firing them up there,” said Maplewood coach Kyle Krepps.

What might have got lost in the shuffle of the late-game heroics of Eimer was the fact that the Tigers gave up just 10 second-half points, trailing 27-19 after Hailee Rodgers’ bucket to open the third quarter.

They forced the Blue Devils into some key turnovers, especially after starting point guard Makenzie Yanc fouled out for Cambridge Springs.

“We got whooped in the fourth quarter,” said Cambridge Springs coach Ryan McKissock. “We let an eight-point lead slip away and then KK got her fifth foul and we didn’t know it, and I told the kids after the game that was my fault..”

“Those were daggers,” he said.

Maddie and Makenzie Yanc combined for 15 points in the first half, and a Finley Rauscher reverse layup right before the second quarter horn made it 25-19 Cambridge Springs at halftime.

This reverse layup from Finley Rauscher to end the half has Cambridge Springs up 25-19 pic.twitter.com/H4D5hiBmSF

Slowly but surely, however, the Tigers started to make their run.

Sadie Thomas scored seven of her game-high 16 points in the third as the Tigers cut it to 31-28 going into the fourth.

Krepps also praised the defense of Moorhead underneath.

“She gives up some bulk underneath, but she just battles,” Krepps said. “I gave her the task of guarding Maddie and she did a great job.”

Thomas also hit a pair of late free throws to ice the game late at 40-33.

Eimer finished with 15 points and Moorhead seven for the Tigers.

Maddie Yanc led Cambridge Springs with 12, while Rodgers had 10 and Makenzie Yanc seven.

The regular season script has now played out the same two years in a row – with a split (Cambridge Springs won the first meeting this season, 34-28).

And the way things shake out, there’s a good chance they could see each other again in the Class 2A playoffs, just like they did a year ago.

“We were already kind of figuring it out before today,” McKissock said. “There’s a good chance it’s going to happen either way, just depending on seeding and where we would get with (West) Middlesex. So we definitely could see them again, which is what our kids want.”