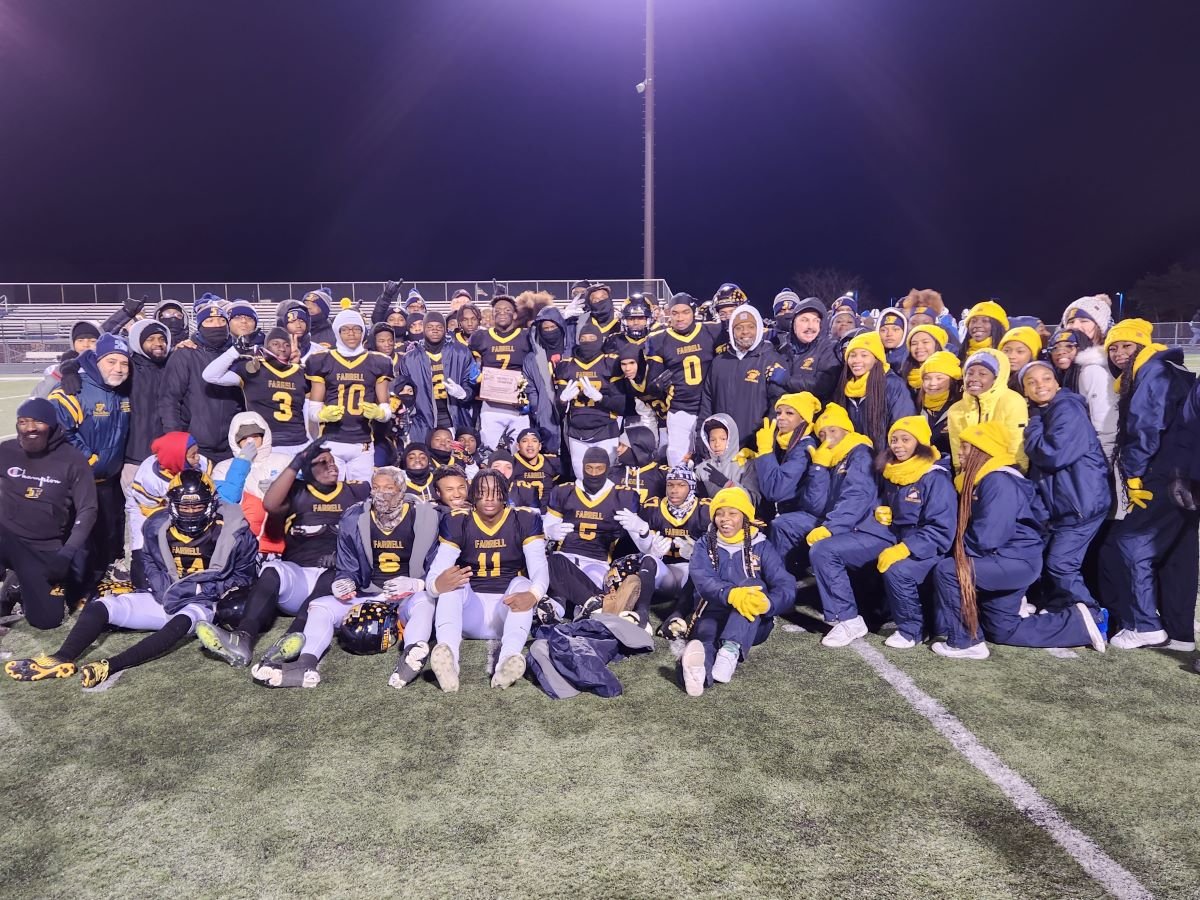 NEW WILMINGTON, Pa. – Farrell overcame its fair share of adversity to capture its second consecutive District 10 Class 2A title on Saturday, 26-0 over Sharpsville.

The Steelers didn’t take an offensive snap in the first quarter and star Kylon Wilson, who has accounted for 1,400 yards and 27 touchdowns receiving and rushing was ejected on his first and only touch of the game for throwing a punch.

Still, however, they led 7-0 at that point and stifled Sharpsville’s high-powered offense for the second time this season.

“Defense wins championships,” said Farrell coach Amp Pegues. “They (Sharpsville) came ready to play. We struggled in a lot of areas tonight, but we were able to buckle down, play some hard-nosed defense and get the job done. If you don’t give up any points you can’t lose.”

Wilson’s only offensive touch of the game came on a play that was blown up by Sharpsville’s Braedon Summers, after which the swing that got him ejected ensued. He will now miss the Steelers (10-1) PIAA quarterfinal game against Westinghouse next week.

“After the play, I think the kid (Summers) said something to him and he reacted,” Pegues recalled. “I didn’t think it deserved an ejection but that’s the way this game goes sometimes.”

Sharpsville (9-3) took its opening drive into Farrell territory before Brandon Chambers scooped up a fumble and raced 65 yards for a touchdown.

“Tahjmere Gibson came up with a big tackle, made him fumble and I picked it up and scored,” Chambers said.

In a game dominated by defense, that was the only score until the fourth quarter, when Farrell was able to turn defense into offense and take advantage of a couple of short fields.

JuJu Phillips intercepted a deep ball from Sharpsville quarterback Caullin Summers and returned it inside the Sharpsvile 40. It was the Steelers’ second interception of the game, with Lamont Samuels picking off a Summers pass on a deep shot to the end zone in the second quarter.

Chambers, who rushed for 128 yards (115 in the second half), scored moments later on a 33-yard scamper down the right sideline, which was more than enough for the Farrell defense.

Farrell’s Brandon Chambers fights for extra yardage as Sharpsville’s Christian Snyder (2) tries to bring him down. Photo by Andy Close.

Kien Wade, Anthony Jackson, Punchy Boatwright, Malachi Owens, and others helped spearhead the defensive effort, which saw Sharpsville turn it over on downs in their own territory on the ensuing possession.

“It’s always a good feeling to pitch a shutout,” Wade said. “It feels good, but we’re not satisfied.”

Kabron Smith followed the turnover on downs with a 6-yard touchdown run, and after the same scenario played out again, Chambers put the finishing touches on his night with a 1-yard plunge with 2:22 to play.

Despite Sharpsville running 20 plays in the first quarter to Farrell’s zero, the Steelers still held the advantage in total yards, 181-144.

“We had a bunch of goals this season, the region was one and D10 was one,” Pegues said. “And we’ve still got another goal to go after. We’re going to enjoy this one tonight and get back to work.”

Christian Snyder led Sharpsville on the ground with 43 yards on 13 carries, while Caullin Summers had 25 yards rushing and was 5-of-13 passing for 44 yards.

With the win, Farrell advances to play Westinghouse, a 44-8 winner over Central Clarion, in the quarterfinals next week at a site and time to be determined.

“They’re a very athletic team, a very senior-laden team,” Pegues said. “We’re going to have our hands full. We have to have a great week of practice. We played them last year, so we kind of know what to expect. If we want to get where we want to be, which is a state championship, we’ve got to win these games.”

McLaughlin, Wagner Help Lead Reynolds to Third Straight District 10 Class 1A Title
Sites, Times Released for PIAA Football Quarterfinals
This website or its third-party tools process personal data.In case of sale of your personal information, you may opt out by using the link Do not sell my personal information.
×
Manage consent