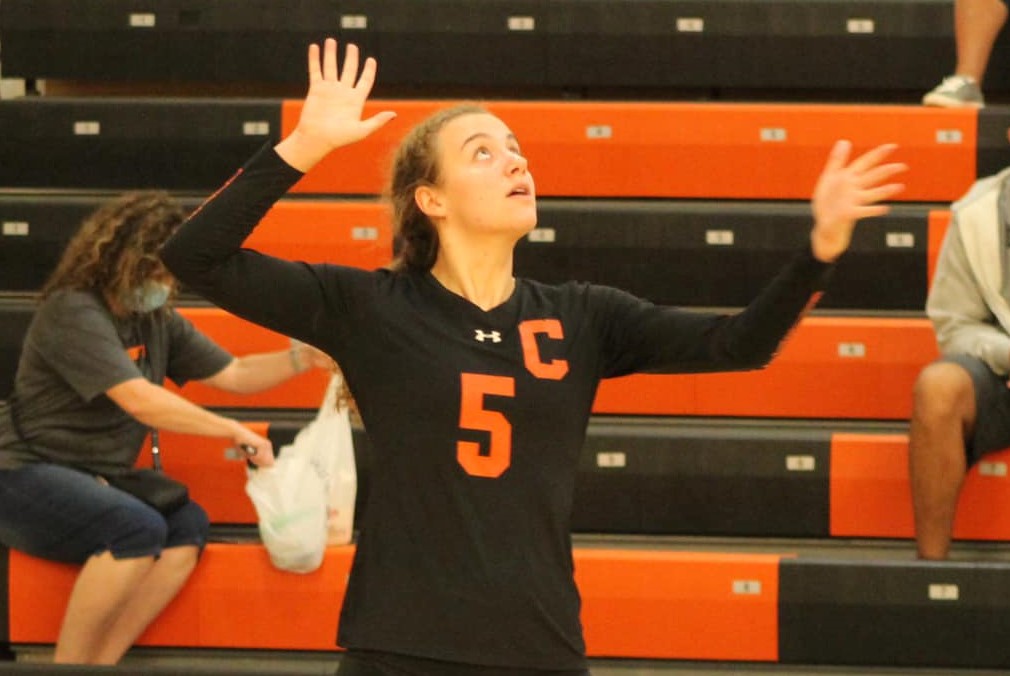 Adia Needham had six kills for Clarion in the win over DuBois Monday. Photo by Nathan Girvan

While the match was a sweep for the Lady Cats, the top-ranked Class 1A team in the state by the Pennsylvania Volleyball Coaches Association, it was really either team’s match to have.

The second set proved to be the turning point for both teams.

After Clarion had held on to win the first set by five – the Lady Cats led 19-12 before DuBois cut the lead to 22-19, the Lady Beavers looked in complete control of the second set following an Emma Delp kill that made the score 21-13 in favor of the home squad.

But Clarion got control of the serve and went on a 7-2 run to get back within three, 23-20, thanks to a pair of Aryana Girvan kills an ace by Korrin Burns.

DuBois, though, seemed to be in pretty good shape when it got the score to 24-21 with three set points ahead of it.

Clarion would have nothing to do with that scoring the next four points to take a 25-24 lead and set up set point for the Lady Cats.

A kill by Adia Needhman made it 24-22 followed by a Burns kill that made it 24-23. Girvan then tied the set at 24 with a kill, and Burns recorded another kill to put Clarion ahead by one.

Bella Gregory fought off the set point with a kill of her own to make it 25-all, but Burns recorded two more kills to give Clarion the second set and a 2-0 lead.

“We wanted to make sure we were playing clean,” Burns said. “We wanted to make all of our serves. We made a lot of errors. At that point (being down 21-13), we just wanted to not be so aggressive (with the serve) and just be smarter.”

Burns was correct. Clarion did make a lot of errors. The Lady Cats committed six service errors in the second set alone and 17 in the match while also being called for a rotation error in the second set giving DuBois seven of its 25 points on unforced errors.

The senior, who is headed to D-I St. Francis next season, had another fantastic match with 23 kills, including 11 during the second set. Five of those 11 second-set kills came after the Lady Cats fell behind 17-11.

While winning the second set was “pretty exciting” according to Burns, it didn’t win the match for Clarion.

But an Eden Galiczynski service error put Clarion ahead 24-23, and the Lady Cats won the match when Morgan Pasternak couldn’t get to a pass from Galiczynski.

In the first set, Clarion looked easily in control taking a 17-8 lead while still holding a 20-14 advantage.

But DuBois got a pair of kills from Jessica Pfaff to help close the gap to three, 22-19, before a back-row kill by Burns was followed by an ace from Girvan to make it set point.

Delp kept DuBois alive with a kill to make it 24-20, but Pasternak served into the net giving Clarion the 25-20 win.

“It is really nice to have her back,” Burns, who was named the Allegheny Grille of Foxburg Player of the Match, said. “She was out for a little bit. We’ve had really weird lineups for like a couple of weeks. So it is good to be back fully healthy.”

Gregory and Delp each had nine kills to pace DuBois with Pfaff adding four kills.

Oct. 11, 2021 VB: Maplewood Beats Cochranton; North Clarion Rallies Past A-C Valley; Youngsville Gets Win
Oct. 12, 2021 Volleyball Schedule
This website or its third-party tools process personal data.In case of sale of your personal information, you may opt out by using the link Do not sell my personal information.
×
Manage consent