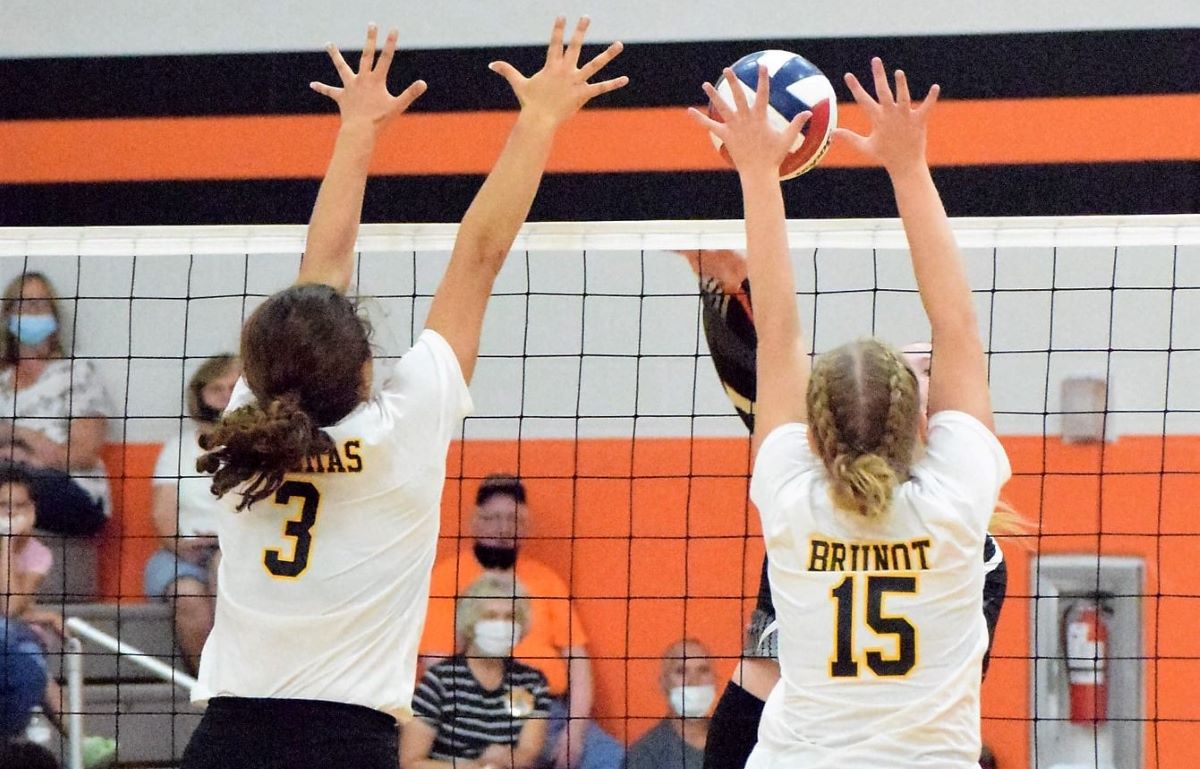 Sadie Thomas and Avery Brunot of Maplewood go up for a block during a recent match. The duo helped the Tigers beat rival Cochranton on Pink Out Night Monday. Photo by Jeff Parkin

Sadie Thomas had a monster match with 30 kills, 16 digs, and four aces.

Avery Brunot chipped in on offense for the Tigers with seven kills, and McKenna Crawford had 23 digs.

Alana Brooks and Kylie Disney each had great games on defense for North Clarion with Brooks getting to 38 balls and Disney to 31.

Ainsley Hartle ran the offense for the She-Wolves with 18 set assists.

Lexi Ruckdeschel paced the Lady Falcons on defense getting to 25 balls while also recording three blocks and four aces. Bella Ielase had 17 digs.

Carlie Rupp and Taylor Ripple each added five each for the Lady Bulldogs with Caylen Rearick leading the defense with 16 digs while chipping in three aces.

Jade Heeter and Abby Kriedler each had three kills for Oil City with Heeter adding nine digs and an ace and Kriedler three aces and three digs.

Syd Svolos had a team-best 16 digs for the Oilers while Ansley Svolos added 11 digs and Chayse Skinner 14 digs.

Mandi Irvine and Olivia Darling had four kills each, while Kenzie Olewine led the defense with 18 digs.

Rafalski, Olewine and Willhelm talked about the win afterward:

Lydia Hittle had ten digs for Commodore Perry and two kills, while Ashley Bowser also had a pair of kills.

Zoey Hoover was big at the net for the Lady Chucks with six blocks while Emily Dobbins served well with five aces.

Madigan led the Lady Dragons with 12 kills and 15 digs with Beer adding 11 kills and a block.

Summer Lucks had 11 digs on defense for the Lady Dragons, and Halee Mineweaser ran the offense with 26 set assists while adding 13 digs, six kills, and a block.

Paige Cresswell added five kills and four aces for the Orioles who also got four kills and seven aces from Rylee Reed, three kills from Abby Cable, and six digs from Devin Rhoads.

Alyssa Weaver dished out nine set assists to go with six digs and three aces for the Lady Panthers with Kennedy Kayle coming up with 12 digs.

Emaa Veneksy paced the defense for the Lady Raiders, who lost 3-1 earlier in the year at St. Marys, with 14 digs.

Madison Marzullo had a nice night at the net with three blocks, and Moira Stanisch ran the offense for the Lady Crusaders with 15 set assists.

Hoopes added nine digs in the win, while Megan Hyde had three digs, two set assists, and a kill. Justin David led the Lady Panthers with eight set assists and chipped in six digs, a kill, and a block.

Jenn Hunter ran the offense for Fairview with 13 set assists.

Dominika Logue chipped in four kills in the victory.

Kalina Powell had 15 digs for Brockway with Ciara Morelli and Zoe Moore each adding eight digs.

Johnsonburg stats aren’t available until the next day.

No other information was available.

Brockway’s Buttery, Rhed Win Thriller to Capture D9 Class 2A Doubles Tennis Title
Epic Second-Set Rally Lifts Clarion Past DuBois in Showdown of Top D9 Volleyball Teams
This website or its third-party tools process personal data.In case of sale of your personal information, you may opt out by using the link Do not sell my personal information.
×
Manage consent