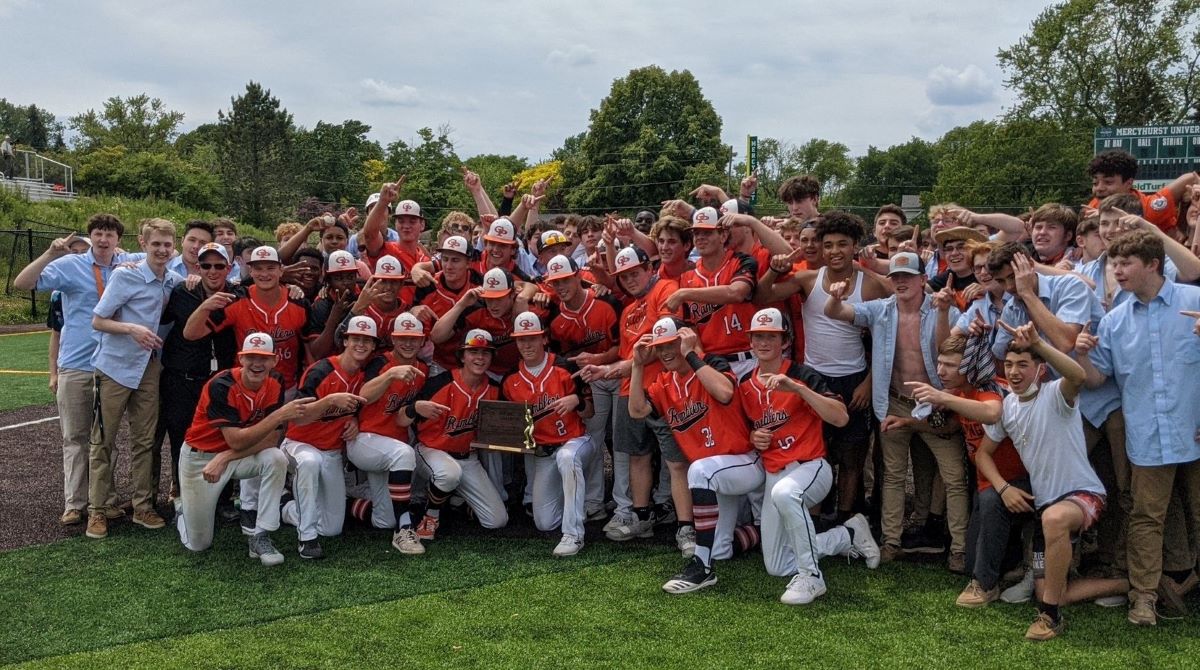 ERIE, Pa. — Cathedral Prep’s Reece Colvin robbed Austin Vaughn of a game-tying home run in the top of the seventh inning to preserve the Ramblers 4-2 victory over Harbor Creek in the District 10 Class 4A Championship game at Mercyhurst University Wednesday afternoon.

Trailing 4-1 in the top of the seventh, Harbor Creek took advantage of a Cathedral Prep error and a Caden Herman single to trim the deficit to 4-2 with two outs. Vaughn worked a full count before lining a ball deep to left-center field. Colvin ranged over and snagged the drive just above the fence to seal the victory.

“It’s funny the people behind me had just said he is about to hit a home run,” said Colvin. “The very next pitch he hits a ball and I’m up against the fence and came down with it.”

The Huskies got on the board first in the top of the first. Vaughn singled, stole second and moved to third on a wild pitch. After a strikeout, Cody Smith hit a sacrifice fly to center plating Vaughn.

Cathedral Prep countered in the bottom of the frame. Harbor Creek starter Aiden Kelly retired the first two Ramblers on five pitches, but Luke Costello drew a walk and came around to score on a Jake Malec double. Harbor Creek tried to get Costello at home allowing Malec to move to third and then an errant throw to third brought Malec to the plate making the score 2-1 Cathedral Prep after one.

Malec doubled to lead off the third and advanced to third on a throwing error by Cameron Williamson. Jackson Mattocks grounded out to second scoring Malec and pushing the Rambler lead to 3-1.

Cathedral Prep tacked on an insurance marker in the fifth.

Costello opened the inning with a double. Malec was intentionally walked to put runners on first and second. Mattocks hit a ball to the right-center field gap and jumped the fence scoring Costello and putting runners on second and third with two outs. Vaughn entered the game to pitch for the Huskies and struck out Jacob Cooper to end the inning and keep the score 4-1.

Malec paced the Ramblers with two hits and a walk while scoring two runs. Mattocks drove in a pair of runs while going 1-for-3. Maddox Stadler picked up the win on the mound pitching 4 2/3 innings of relief allowing one run on two hits, two walks and striking out three.

Vaughn was 1-for-3 with a run scored for the Huskies. Kelly took the loss on the hill going 4 2/3 innings allowing four runs, two earned on six hits while walking two and striking out seven.

Both teams will advance to the PIAA 4A playoffs. The Ramblers will take on the third-place squad from the WPIAL, either Blackhawk or Laurel Highland, while Harbor Creek will draw the WPIAL Champion, either Montour or New Castle. Both of those games will be played on Monday at a site and time to be announced.

Behind Makray, Four-Run Seventh, C-L Beats Clarion to Advance to PIAA 1A Softball Playoffs Powered by North Washington Rodeo
Clearfield Beats Somerset to Advance to PIAA 4A Baseball Playoffs; Kane Fails to Qualify in 2A Powered by Washington Rodeo
This website or its third-party tools process personal data.In case of sale of your personal information, you may opt out by using the link Do not sell my personal information.
×
Manage consent