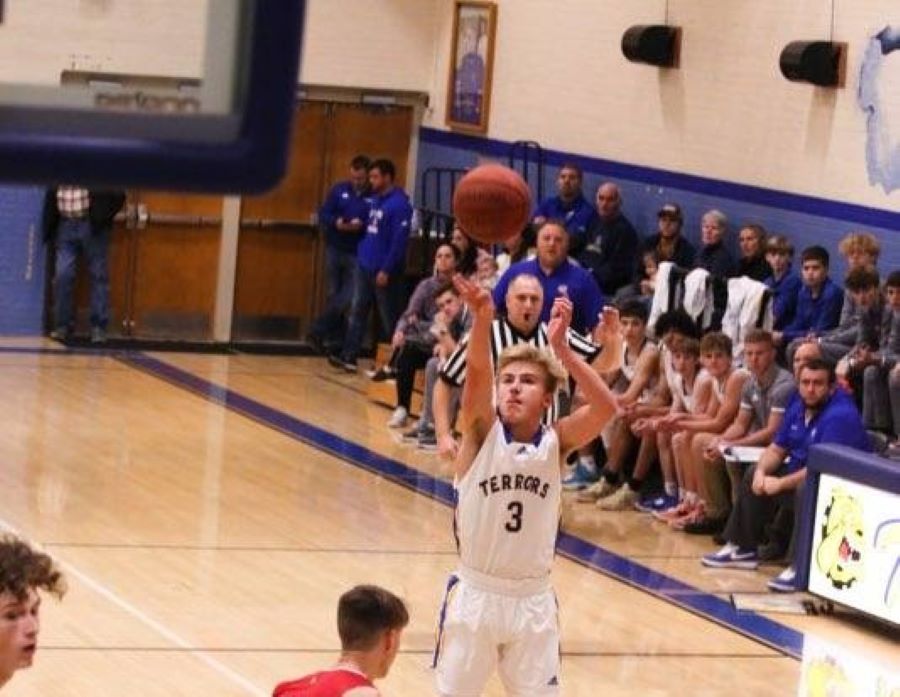 Landon Francis scored 24 points and Austin Cousins had 18 points on six threes on his way to tournament MVP honors.

Cousins talked about the win afterward:

After Schenfield’s triple, the Terrors knocked down 5-of-6 free throws down the stretch in overtime to preserve the win.

Otto-Eldred went on a 9-0 run in the third quarter to take a 41-35 on a pair of Cousins’ threes and another from Manning Splain.

Bradford responded with a 6-0 run to close the quarter, capped by a Jake Franz layup. Franz had a game-high 19 points for Bradford.

Neither team led by more than four in the fourth quarter, with Bradford taking a 45-41 lead on a pair of Isaiah Fitton free throws.

Otto-Eldred rallied to take a 54-51 lead, but Bradford tied the game on Franz’s triple with 32 seconds remaining.

The Terrors had a chance at the win in regulation, but Cousins’ three at the buzzer went off the back of the rim.

Brendan Warner added nine points (all in the first half) for Bradford, while AJ Gleason had eight.

“The boys have heart,” coach Francis said. “They play hard, I coach hard. This is the second battle and we have 20 more battles in the regular season.”

KNOX, Pa. – Cam VanWormer scored 20 points to help Oil City to a 65-39 win over DuBois in the championship game of the Keystone Tip-off Tournament.

Sayyid Donald chipped in 16 points for the Oilers with Jake Hornbeck adding 15 points.

KNOX, Pa. – Devon Lauer scored seven of his 21 points in overtime to lift Clarion to a 78-73 win over Keystone in the consolation game of the Keystone Tip-off Tournament.

The game was tied at 62 at the end of regulation before the Bobcats scored 16 overtime points.

Drew Keth paced Keystone with 20 points with Aiden Sell adding 19 points. Cole Henry had a double-double with 16 points and 16 rebounds and Tyler Albright handed out seven assists to go with six points.

James Henry had a game-high 20 points for Venango Catholic.

MARIENVILLE, Pa. – Allen Mertsock led a foursome of Oswayo Valley players in double digits with 15 points to lift the Green Wave to a 68-17 win over Forest Area in the consolation game of the Forest Area Tip-off Tournament at East Forest.

Cayden Black added 14 points in the win with Nikalus Bonney chipping in 12 and Brayden Wiley 10.

KITTANNING, Pa. – A 27-point outburst by Brett Loughry helped lead Grove City to a 65-51 win over Geibel Catholic at the Armstrong Tournament.

Loughry scored 10 of his 27 in the fourth quarter, including going 8-10 from the free throw line to help put the game away.

The Eagles also got 16 points from Nathan Greer, and Kam Martin scored seven points and pulled down 16 rebounds.

BEAVER FALLS, Pa. – After building a double-digit halftime lead, Hickory held off a late Central Valley rally for a 50-49 win in the Midland Tip-Off Classic.

The Hornets led 28-14 at the half, but were outscored 35-22 and hit just three field goals in the second half. Hickory went 16-22 from the free throw line in the half to hold on for the win.

Aidan Enoch led the way with 18 points. Rylan Dye had 11 points, and Tyson Djakovich had 10.

SHEFFIELD, Pa. – Leihden Wotorson led a trio of players in double figures as Sheffield topped North Clarion, 51-40, in its first game of the Sheffield Tournament.

Wotorson knocked down four 3-pointers on his way to 16 points for the Wolverines. Lucas McNeal had 11 points and seven rebounds and Connor Finch had 10 points, seven rebounds, and four blocks in the win.

SHEFFIELD, Pa. – Saegertown responded to an early deficit by dominating the second and third quarters before holding off a late Sheffield rally for a 72-56 win in the Sheffield Tournament.

The Wolverines started the game with an 8-0 run, and led 17-14 after the first quarter. The Panthers then proceeded to outscore Sheffield 17-9 and 21-6 in the second and third quarters, respectively.

Sheffield pulled within seven with 1:35 to play in the game, but Saegertown was able to close out the victory to go 2-0 in the modified tournament (Port Allegany withdrew due to the football team playing in the PIAA semifinals on Friday).

Brady Greco led the Panthers with 21 points. Collin Jones had 18 points, and Zach Yoder finished with 14.

Connor Finch paced the Wolverines with a game-high 25 points, 14 rebounds, four steals, and three assists and Lucas McNeal had 13 points and five rebounds.

STONEBORO, Pa. – Three players scored in double figures to lead Cambridge Springs to a 49-38 win over Lakeview in the Lakeview Classic Championship.

Owen Riley led the way with 14 points, while Brady Campbell had 13, and Josh Reisenauer added 11.

BROOKVILLE, Pa. – Tournament MVP Parks Ordiway poured in 25 points and led Warren to a 75-45 win over Union to win the Brookville Tip-Off title.

Fellow all-tourney picks Tommy Nyquist and Brady Berdine scored 12 and 10 points respectively while Braylon Barnes turned in a double-double with 12 points and 10 rebounds.

The Dragons trailed 11-6 at the 3:53 mark of the first quarter before taking the lead for good with an 18-0 run that gave them a 24-11 lead with 6:35 left in the second quarter. Warren led 46-26 by halftime and 59-38 after three quarters before putting on the Mercy Rule running clock in the closing seconds.

Cam Keyser poured in a game-high 28 points for Jamestown, while Cole Ternent added 12.

FAIRVIEW, Pa. – Behind 18 points from Evan Moffett, Seneca pulled away for a 64-42 win over Harbor Creek in the Fairview Tip-Off Classic.

Seneca built a 33-16 halftime advantage en route to the win.

DUKE CENTER, Pa. – Gowanda (NY) built a 41-25 halftime lead and held off a late Eisenhower rally for a 67-61 win in the consolation game of the Randy Stebbins Memorial Tournament consolation game.

John Ondus led Gowanda with 23 points, while Quentin Centner had 18.

Kyler Black and Kris Bunk scored 19 and 18 points respectively for Eisenhower, with Black scoring 10 in the fourth quarter and Bunk eight.

Joe Roth led the way for Ellwood City with 27 points, while Aaron Lake had 12.

Micah Rupp added 10 points for the Gremlins who also got eight tallies from Jacob Callihan.

FOXBURG, Pa. – Jay Clover scored a game-high 26 points to lead A-C Valley to a 64-45 win over Portersville Christian in the A-C Valley Hoops for Heroes Tournament.

SHARON, Pa. – Cole Buckley and Jalen Wood scored 17 points each as Franklin beat Sharon, 68-40 in the consolation game of the Sharon Tip-Off Tournament.

Damon Curry and Dreydan Payne were also in double figures for Franklin, which led 35-20 at halftime, with 13 and 11 points, respectively.

Derek Douglas led Sharon with 15 points, while Bishop Root had 14.

SHARON, Pa. – Tasso Sfanos scored 34 points to lead Mars to an 85-57 win over Meadville in the championship game of the Sharon Tip-Off Tournament.

Ryan Ceh and Remi Black were also in double figures with 12 and 11 points for Mars.

BROOKFIELD, OHIO – Matteo Fortuna and Isiah Jones scored 16 points each to lead Brookfield (Ohio) to a 55-49 win over Sharpsville.

Sharpsville led 33-21 at the half, but Brookfield outscored them 34-16 in the second half en route to the win.

Dawson Hooftallen added a double-double for the Panthers with 17 points and 11 rebounds.

David Bahm added 16 points for Mercyhurst Prep in the win.

Greenville outscored the Big Reds 20-9 in the fourth quarter en route to the win.

Soren Hedderick was also in double figures for Greenville with 10 points.

Gio Rococi had 13 points for West Middlesex, while Luke Mild and Caden Bender added nine each.

SUGARCREEK BOROUGH, Pa. – D’Andre Whitman scored a game-high 26 points to lead Rocky Grove to a 65-38 win over Cranberry in the championship game of the Roy Saner Tip-off Tournament at Rocky Grove.

Seth Schwab had 12 points for Cranberry.